The most exciting new hotels of 2016

Live like George Clooney in Lake Como, escape to Fiji's hot hideaway and create your own scandal at the glamorous new Watergate Hotel 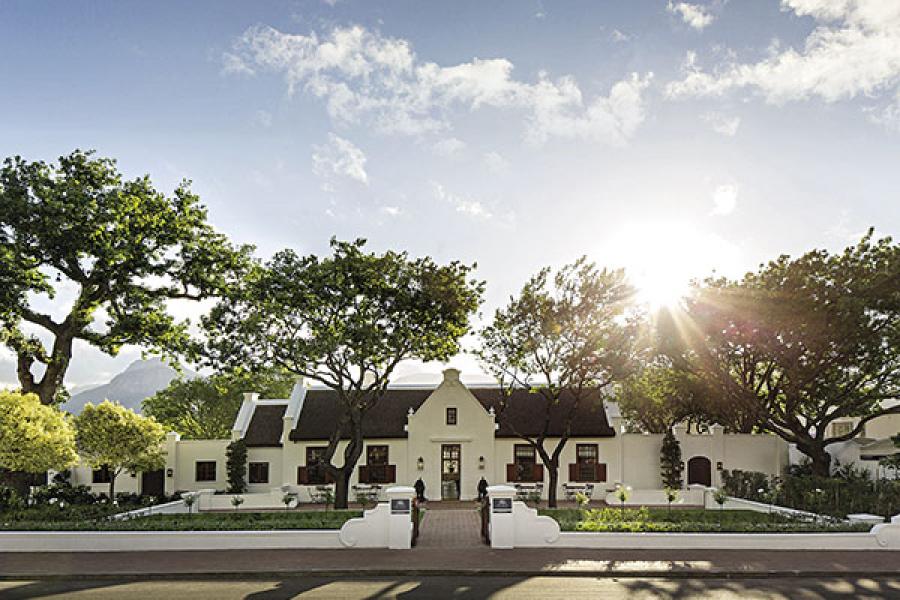 This year’s most exciting new hotels are all over the map. Among the many intriguing openings for 2016 are new luxury properties in far-flung locales such as Bhutan and Sri Lanka (go now, because development is happening fast and these places are likely to change forever, soon), hip hotels out to revitalise old-fashioned destinations like Palm Springs, spinoffs from beloved hotels in unlikely settings (Le Sereno in St Barth is opening a new outpost in Lake Como) and radically reinvigorated classics like the Ritz Paris. Meanwhile, Asian luxury brands, including Six Senses and Aman, are aggressively out to expand their portfolios and raise the hospitality bar. Here’s what should be on your radar for 2016.

Il Sereno Lago di Como, Italy
Acclaimed designer Patricia Urquiola is overseeing the aesthetics of this 30-suite hotel on the shore of Lake Como. Right next to the village of Torno, the hotel will be just an eight-minute drive from the centre of Como but still intimate and private. The restaurant will serve simple, classic northern Italian fare with ingredients from nearby Valtellina and Piedmont. (From $650, lesereno.com)

Masseria Le Carrube, Italy
This year the family-owned San Domenico hotels is opening its fifth hotel, in Puglia, tucked away from the centre of the whitewashed city of Ostuni—within easy reach of the main square but still blissfully quiet. Constructed out of a reclaimed masseria (farmhouse), the intimate hotel will have 12 rooms and seven suites, both rustic and modern in style. The region’s history is evident in the rooms’ antique furnishings, a trullo (conical hut) in the main reception area and a 12th-century olive mill and press. In a nod to the “Italian boot heel’s” bounty, the restaurant is the only vegetarian one in Puglia. (From $150, masserialecarrubeostuni.it)

The Ritz Paris
In its 118-year history the Ritz rightly became one of the world’s grandest grand hotels. But amid a luxury hotel boom in Paris the Ritz faded and, in 2011, was left off the French tourism ministry’s list of palace hotels. That spurred a three-year, $200 million-plus renovation by architect-designer Thierry Despont. The Ritz is finally set to reopen this spring , with the 71 pastel-hued rooms and 71 suites reimagined in a discreet classic style and the addition of a new Chanel spa, plus a reborn Ecole Ritz Escoffier cooking school. There’s a returning gastronomic restaurant, L’Espadon and the famed Hemingway Bar will also rise. (From $1,100, ritzparis.com)

Six Senses Bhutan
Following the model successfully pioneered by Aman resorts, Six Senses is opening five hotels in Bhutan—in Thimphu, Punakha, Gangtey, Bumthang and Paro—to give guests a seamless circuit experience. While the new Six Senses lodges will have just 82 rooms among them, the ‘happiest kingdom on earth’ is set to change soon: A paved ring road that can accommodate tour buses is under construction, and three-star hotels are in the works to attract mass tourism. (sixsenses.com)

Anantara Peace Haven Tangalle Resort, Sri Lanka
Finally, the stunning southern coast of Sri Lanka is getting luxury accommodations. The biggest is from Thailand-based Anantara, which knows how to deliver true luxury while maintaining a sense of place. The 152 guest rooms will include 32 villas with private pools and the resort will have a 25-metre swimming pool, a major spa, kids’ and teens’ clubs, and six restaurants and bars showcasing Sri Lankan cuisine and also highlighting its colonial customs.
(From $250, anantara.com)

Amanemu, Japan
Aman’s first hot spring resort is set to open this spring in Ise Shima National Park in Honshu. Each of the 24 suites and four two-bedroom villas, on the shores of Ago Bay (known locally as the Bay of Pearls), will have its own mineral hot spring, as well as access to the resort’s extensive spa, a Watsu pool, a gym and yoga studio, a lap pool and a Japanese restaurant and lounge. The Aman-ified version of a traditional ryokan, it aims to live up to its name, which means ‘peace’ (Aman) in Sanskrit and ‘joy’ (nemu) in Japanese.
(From $750, aman.com)

Leeu House and Leeu Estates, South Africa
The newest luxury lodgings in South African wine country, run by the people behind Mullineux & Leeu Family Wines, in partnership with the Indian entrepreneur Analjit Singh, are a 12-room boutique hotel (opened in December) that is minutes away from the restaurants and galleries of Franschhoek and a 17-room retreat coming this year in a 19th-century manor house surrounded by 170 acres of vineyards. Tastings at the wine studio are, of course, part of the packages.
(Leeu House from $155, Leeu Estates from $286, leeucollection.com)

Asilia’s The Highlands at Ngorongoro, Tanzania
Asilia’s newest East African camp will have a spectacular location nearly 9,000 feet high on the slopes of the Olmoti volcano, far from any other lodge but close enough to the Ngorongoro crater for guests to be there at dawn and there will be a stunning and contemporary design to match. The eight tented suites will take the shape of geodesic domes, with massive windows and wood- burning stoves for the chilly savanna nights. The activities will go far beyond the standard crater circuit to include half- and full-day hikes, community visits and spectacular stargazing.
(From $710 per person, asiliaafrica.com)

Kokomo Island Resort, Fiji
This 21-villa hideaway is set to open this autumn on a 135-acre private island, one of ten in Kadavu’s great Astrolabe Reef. The villas will all be built beachside, come with private pools and be well-positioned for Fiji’s great pleasures of scuba diving and snorkelling with manta rays. The rate includes all food and drinks, a massage, tennis, diving and other water activities. (From $2,600, yaukuve.com)

Explora Valle Sagrado, Peru
The innovative luxury-adventure company Explora, which put Chile on the map with its all-inclusive, active lodges in Patagonia and the Atacama (currently rebuilding after a fire), changed the face of Latin-American adventure travel. Twenty years on, it’s finally expanding beyond Chile. Sensitively built on an old Inca structure in the Sacred Valley, the accommodations will be more lavish and significantly larger than those in previous hotels (which are plenty comfortable, given that guests are generally too busy outside to spend many waking hours in them). The spa, built over the home of the original owner’s mistress, will include an outdoor pool, two Jacuzzis and a Turkish bath. Explora is also offering an unprecedented two-for-one deal for bookings made before March. (From $2,160 for three nights, explora.com)

MEXICO AND THE CARIBBEAN

Chablé, Mexico
A spa-focussed hideaway in the interior of the Yucatán—near ruins like Chichen Itza and Uxmal and the faded beauty of gloriously crumbling haciendas—Chablé will include 40 standalone villas with private pools, a lavish spa and a farm-to-table restaurant; it also claims the world’s largest tequila collection. But its most enticing feature is perhaps its own private, natural cenote, one of the cavernous swimming holes held sacred in the native Mayan culture—and otherworldly to explore. (From $850, chableresort.com)

Park Hyatt St Kitts
Park Hyatt-style comfort comes to the Caribbean . The 125 guest rooms and suites, some with large terraces, will overlook the white-sand beaches of Christophe Harbour. Some rooms will have rooftop pools with tremendous views of the volcanic island of Nevis. Guests will have access to the Tom Fazio designed 18-hole championship golf course, a beach club and a 300-acre superyacht marina and marina village. (stkitts.park.hyatt.com)

Bahama House Inn
Reopening this spring as part of the Eleven Experience collection, this historic Harbour Island hotel will more than live up to the ‘experience’ in its new parent company’s name. Along with its own private island for guests who want to play Robinson Crusoe, the daily rate will include superlative bone- and deep-sea fishing, kite boarding, scuba diving and other adventures. For an extra fee, it’ll helicopter you over to the renowned bonefishing waters off Abaco. (From $1,150 per person, elevenexperience.com)

Four Seasons Hotel
The Surf Club, Miami
Four Seasons long ago transcended its image as a cookie-cutter brand. But for anyone who remains unconvinced, The Surf Club should set the record straight. Its origins go back to 1930, when Harvey Firestone acquired 9 acres of land for a private club that became a gathering spot for the most glamorous people of the era. Fast-forward to today: Architect Richard Meier came in to update the design of the 77-room hotel and surrounding community of 150 private residences. (thesurfclub.com)

V Palm Springs Hotel, California
Opening just in time for Coachella in April, this 140-room hotel is out to redefine high-end desert lodging. Situated near downtown Palm Springs, the hotel was designed to embrace the city’s history as a Hollywood playground but also strategically deploys canny flourishes—like feathers and snake motifs—that pay homage to the native Cahuilla Indians. (From $300, vpalmsprings.com)

Las Alcobas, Napa Valley
Like its sister boutique hotel of the same name in Mexico City’s fashionable Polanco neighbourhood, this 68-room resort will be designed by architects Yabu Pushelberg and managed by Starwood’s luxury collection. The rooms and suites will have terraces and outdoor fireplaces and an enviable location in St Helena—within walking distance of the Culinary Institute of America and the town’s restaurants, galleries and boutiques.
(From $675, starwoodhotels. com)

The Beekman, New York City
New York’s newest ‘It’ hotel is slated to open this spring in an 1881 landmark building in the financial district with a stunning nine-storey Victorian atrium and pyramidal skylight. The Beekman will be part of the stylish yet comfortable Thompson Hotels portfolio, and along with 287 well-turned-out rooms, it will have destination restaurants from Tom Colicchio and Keith McNally. (From $619, thebeekman.com)

The Watergate Hotel, Washington, DC
Following a $125-million renovation, America’s most infamous hotel is on track to become a 21st-century resort soon. The reborn Watergate will have 336 guest rooms and suites. Almost all of the rooms and suites will have striking views of the Potomac from their private balconies. Noted designers Ron Arad and Rakel Cohen oversaw the hotel’s new look, which marries the undulating 1960s architecture with classic elegance and bold midcentury-modern flourishes, and comes complete with sculptural Moroso furnishings to honour the Italian heritage imbued by the hotel’s original architect Luigi Moretti. Presumably, the new Watergate will also be bug-free. (From $425, thewatergatehotel.com)