Stanford researchers use the concept of "dynamic norms" to persuade diners to eat less meat. 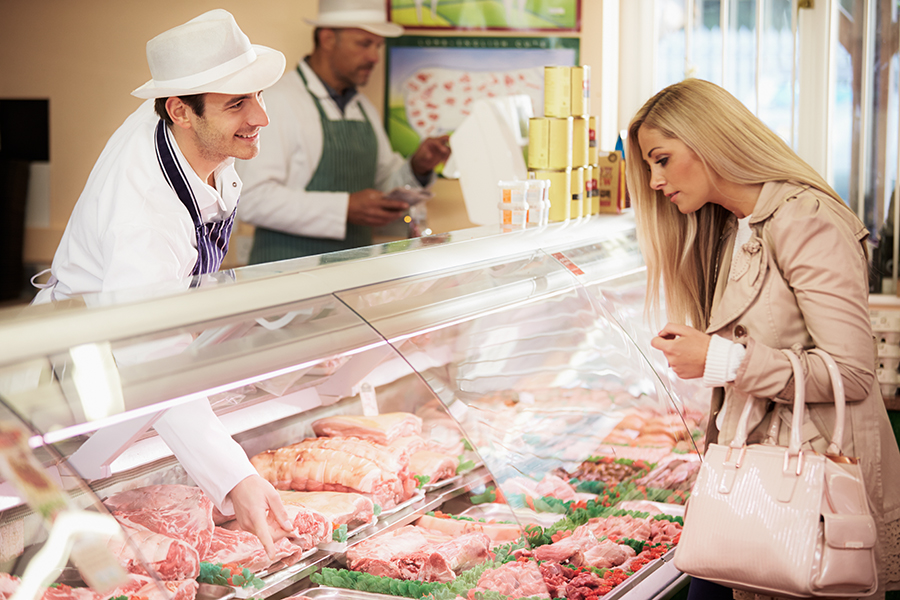 A few years ago, Gregg Sparkman was thinking about how you might encourage people to eat less meat. Then a PhD student in psychology at Stanford University, Sparkman knew that animal farming is a major factor in global warming, producing about 15% of all greenhouse gas emissions worldwide. While politicians dithered over carbon taxes, here was an area where ordinary people could make a real difference in their own lives.

But how could you get people to alter their behavior, especially with something as personal and deeply ingrained as dietary habits? If you were trying to create a public-interest ad campaign, like the ones used to discourage smoking some years ago, what exactly would you say? How would you shape your message?

You could use ethical arguments. But people hate being lectured to, and that could invite a backlash. You might dwell on the dire consequences of inaction, but everyone’s heard them before. Besides, scare tactics worked for tobacco use because smokers controlled their destiny; with rising sea levels, people tend to believe that individual sacrifices won’t make a drop of difference.

But Sparkman had an idea. He also knew that social perceptions strongly influence individual choices. What would happen, he wondered, if you simply informed people that others were already beginning to eat less meat. No preaching, no judgment — just awareness of a trend, however nascent. He called it “dynamic norm messaging.”

To test his idea, Sparkman enlisted the aid of a lunch spot on the Stanford campus called Bytes Café. As customers waited in line, he had them fill out a survey that forced them to engage with his simple message. The result? More than a third of those who received the dynamic-norm message ordered a vegetarian meal, compared to around 20% of those who didn’t.

Clearly, the dynamic-norm approach had potential. But Sparkman’s method wasn’t exactly scalable. “You can’t have much impact by accosting people in restaurants and grocery stores and making them fill out questionnaires,” he says.

So Sparkman, now a postdoctoral scholar at Princeton University, together with Neil Malhotra, the Edith M. Cornell Professor of Political Economy at Stanford Graduate School of Business, decided to try a more practical tack: simply adding a note to restaurant menus. Along with three other Stanford researchers — Thomas N. Robinson from the Stanford School of Medicine and Elizabeth Weitz and Gregory M. Walton from the Stanford University Department of Psychology — they ran nine separate field and online experiments, varying their targeting and approach to see what worked best. The Stanford Woods Institute for the Environment funded the early stages of the research with an Environmental Venture Projects grant.

As they report in a new paper, the results were less dramatic, in part because most diners in their experiments never read the note. But the simple message still had a positive bump — at almost no cost, Malhotra says. “It shows that you can apply this idea of dynamic norms at a very large scale, to encourage widespread change.”

The Power of Norms
“Humans are social animals,” says Malhotra. “We’re highly attuned to what we see as the norms of our group.” We often think of these as the unwritten rules of society, but Sparkman says psychologists use the term “social norms” in a broader sense, as simply our perceptions of what others think and do.

“We conform to social norms not just because of peer pressure, but because other people’s behavior is a key source of information for us,” Sparkman says. “We tend to think that if most folks are doing something, it’s probably a good idea. We’ll give it the benefit of the doubt. So that information has normative status.”

For example, if other people in a group we identify with are making certain choices, like driving around the suburbs in giant gas-guzzling pickups, we learn to see that as normal behavior and are not ashamed to do the same, though we don’t feel obligated to.

Of course, marketers are wise to the power of norms. That’s why TV ads show people of all ages and ethnicities enjoying a product, carefully checking every demographic box. It’s why political campaigns run cooked opinion polls — not to inform their strategy, but to persuade undecided voters to join the parade. Parents of teens know this as the “everybody’s doing it” argument.

Static vs. Dynamic Norms
But that obviously wouldn’t work for meat consumption, because eating meat is the norm in the West. Only about 3% of Americans identify as vegetarian, and the ritual of the roast is deeply invested with cultural meaning and emotion.

“So it was a tough problem,” Sparkman says. “How do you get people to make some behavior change when it’s actually counter-normative?” His idea was to focus not on what social norms are now but on how they’re evolving. Then you could bring social influence to bear, “not to bolster the status quo but to question it” — in a sense, reversing the polarity of the effect.

“So instead of saying X percent of people don’t eat meat, which is the static view, you highlight the fact that a growing number of people are choosing meatless meals,” he says. The hope is that the audience will think, this is the way the world is moving, and I want to keep up with the times — thus conforming in advance.

Importantly, the message didn’t tell people what to do, Sparkman says. “Basically it was just, ‘We’ve noticed this trend, so we offer a variety of meatless options.’” That turned out to be wise; when they later tested a more heavy-handed, prescriptive approach — saying, in effect, “People are changing, and you should too” — the results were far less positive.

Although the researchers have been working on this idea of dynamic-norm messaging for several years, it hasn’t yet filtered through to real-world influencers, Malhotra says. “The classic marketing works on social influence are very much in the static-norm framework.”

But Malhotra sees a lot of potential. “If you don’t want to be deceptive, static norms are only useful in certain domains” — namely those where, by definition, most people are already on board. “Dynamic norms apply to many more things, especially where you want to get large-scale social change.”

Know Your Audience
Still, it’s no panacea, Sparkman says. “For one thing, it matters whom you’re referring to when you craft a norm statement. People are more responsive to the example of others who they see as similar. So instead of saying ‘Most people do this,’ it might be more effective to say ‘most Americans,’ or ‘most people under 30,’ depending on who you’re trying to hit.”

But that can be limiting. In one of their field tests, at another popular Stanford café, the Axe and Palm, Sparkman found that the conversions came mainly from patrons who had a Stanford ID. The others — mostly tourists and visitors — may have assumed the norm reference was to regulars at the café, which excluded them. Likewise, in other studies, a third of all test subjects said they thought the message was aimed at vegetarians, so they likely ignored it.

There’s also a chance of adverse reactions. In one case, the researchers had gotten positive results from lunch patrons at a high-end restaurant, but when they extended the test to the dinner hours, they found that meat consumption actually increased. “It was if they were saying, ‘Hey, I get to choose this. You can’t tell me what to do,’” Sparkman says.

One theory, supported by prior work, is that the pricier dinners attract a richer clientele, and high-income people don’t like to feel as if they’re following the masses. Or it may just be a limitation with certain settings, Malhotra says. More so than lunch, dinners out are special occasions for socializing and enjoyment, and people may be in a less receptive mindset.

On the other hand, one of the researchers’ concerns, whether the menu notes might cause some ill will toward the establishments, was a non-issue. “We found that people attributed really positive things to the restaurants because of the note,” Sparkman says. Customers generally saw the gesture as evidence of a thoughtful business that cared about its customers’ health as well as the environment, and they anticipated that the dishes would taste better too.

Act Normal
Across a number of field tests and online experiments, Sparkman and Malhotra also searched for ways to improve the hit rate of this kind of campaign. One of the biggest issues was how to get more people to simply notice and read the message.

Surprisingly, a banner that spanned the full width of a menu proved no better than a small note. In fact, what worked best was designing it to resemble a sticky note and moving it to the top left corner, so that it looked less like a normal part of the menu. “It suggests that somebody made a special effort to tell you something, and you’re supposed to read it,” Sparkman says.

Still, without some way to force engagement, as in Sparkman’s early study using questionnaires, there may be inherent limitations to this approach. That doesn’t worry Malhotra, though.

“What makes a good intervention?” he asks. “People tend to look at how big an effect it has. But that figure is really just a numerator; you need to consider it in relation to the cost. If it’s really, really cheap and easy to do, then why not do it?”

Tweets by @forbes_india
'The no-touch gifting market will grow in the pandemic': Shashwat Goenka
How to choose the best windows for your kitchen