Anuradha Roy: The storyteller from the hills 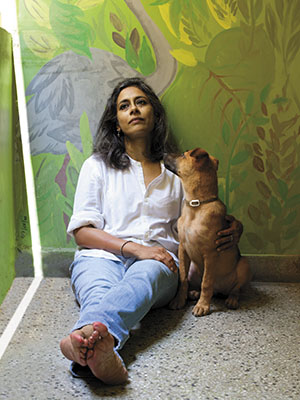 The characters in Sleeping on Jupiter are like ghosts. They are persistent in their haunting and linger long after you read the final line of the novel. Even their creator Anuradha Roy does not quite know their future but, she tells ForbesLife India, imagining their fate, the ‘what ifs’ of their lives, is a “pleasant private parlour game”.

Longlisted for the 2015 Man Booker Prize, Sleeping on Jupiter is Roy’s third novel. It is set in Jarmuli, a fictional temple town by the sea, where, over the span of five days, the lives of the protagonist Nomi, three elderly friends, a poetry-spouting tea vendor and his assistant, a temple guide and a fixer collide.

The impact is not pretty, especially because Roy reveals how relationships can turn violent. In a narrative which, much like the sea, alternates from gentle to choppy, Roy writes about faith, religion, rape, abuse, old age and homosexuality. At the centre of the story is Nomi, who is born in India and adopted by a family in Norway. Almost ethereal, she belongs neither to the land she was born in nor the one that adopted her. She is looking for answers in Jarmuli, home to an ashram where, as a child, she was sexually abused by a famous god-man.

The common thread, says Roy, is friendship: “Between the three women, between two little orphaned girls, between the main character and the gardener, between the temple guide and the tea boy.” In an email interview with ForbesLife India, she talks about her novel, life in Delhi, the stories she writes, the books she reads, and Permanent Black, the publishing house she runs with her husband.
Excerpts:

Q. Do you have a writing process?
I wish there was a process. It’s just the usual slog work a lot of the time, writing passages that I delete the next day, making more notes than I can keep track of and so on. When I am working on a book, I work very methodically and regularly, but at other times, I don’t write every day. I don’t show novels in progress to anyone, not until a full draft is done.

Q. Can you explain the title of your book, Sleeping on Jupiter? Is it a play on Jupiter as the god of sky and thunder?
The ‘Jupiter’ of the title is literally, as well as metaphorically, another planet. One of the characters who wants to find a different world for himself thinks of it as the farthest he can go to, a place removed from where he is, where everything is altered, including its sky, which has 16 moons.

Q. The effect of age on the human brain is a gentle but insistent theme in Sleeping on Jupiter. The character Gouri has what could well be the early onset of Alzheimer’s. And as the story progresses, her friend Vidya feels her mind beginning to unravel as if it were “an undone skein of wool”. In your first book, An Atlas of Impossible Longing, Amulya Babu’s wife has an unnamed mental disorder. Both she and Gouri lead less than full lives. What was going on in your mind when you chose these very real age-related illnesses for your characters?
I very often find myself saying ‘I don’t know’ to these questions. It’s not possible for me to work out why certain themes and character traits came into a novel; I can’t fully analyse how the narrative took the shape it did. With Gouri, I think I know the route, a bit: Some way into working on the book, I went on a trip with my aunt and mother. We got ourselves rooms in a nice hotel, and they were so delighted about everything, it was great fun. But some years after that, my aunt was diagnosed with Alzheimer’s and I found myself going back to the trip to work out if there had been signs of it and if we just hadn’t noticed anything unusual. Maybe that influenced the way I thought of Gouri, though she isn’t remotely like my aunt in any other way.

Q. This is a story about abuse, paedophilia, misogyny, rape…  and Nomi is at the centre of the storm,  having been sexually abused by a renowned god-man in her childhood. Is your book an indictment of blind faith and god-men?
The character who turned out to be Nomi was an incidental figure. She appeared in one scene in a short story (I had written) out of which this novel came. Afterwards, I found myself thinking about her—and about Badal (the tea vendor), who was also a walk-on character—long after I had put away that story. When I thought of her past, I instinctively felt it was one which had great suffering, but also that she had come out of it fighting. As for faith, the characters have a whole range of approaches to religion, from the commercial and exploitative to the devout and deeply spiritual. 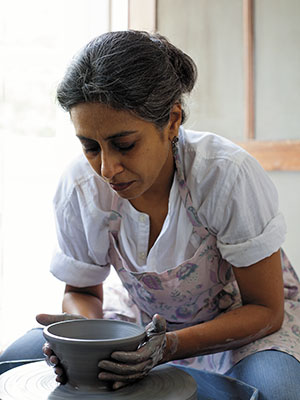 Image: Madhu Kapparath
HONOUR ROLL: Anuradha Roy published her first work of fiction, An Atlas of Impossible Longing,in 2008 to excellent reviews, both locally and globally. Her second novel, The Folded Earth (2011), won The Economist Crossword Prize for Fiction and was longlisted for the Man Asian Literary Prize

Q. There’s a point in the story when Nomi thinks of the Sargasso Sea. Was that a deliberate reference to Jean Rhys’s Wide Sargasso Sea, a novel that was framed as a prequel to Charlotte Brontë’s Jane Eyre?
It’s nice when someone catches these little things inserted into a book. For example, only one of the reviewers pointed out that the action takes place over 18 days, the period of the war in the Mahabharata.

Q. In your earlier novel, The Folded Earth, the town of Ranikhet looks to the Himalayas in the way that Jarmuli is embraced by the sea. How important is backdrop to you as a writer? When you choose a motif or theme, is there a process you go through?
The backdrop is vital. Until I can feel and see every bit of the setting, I can’t get the novel clear in my head. I don’t choose a theme ever: It’s always character- and place-driven for me. Both Atlas and Folded Earth started from images. One was of a house which had a river lapping at its verandah, the other of the lake at Roopkund with skulls floating in it. Sleeping on Jupiter began as a short story and if I was thinking of any themes at all, it was friendship. A lot of the book is about friendships—between the three women, between two little orphaned girls, between the main character and the gardener, between the temple guide and the tea boy.

Q. By the end of the novel, everything unravels. The scenes are almost disjointed. You could have extended it, and allowed events to run their course. Instead you give us fragments…beautifully written, but still fragments. Why?
I wanted the compressed elusiveness of the short story in a novel, for it to end when things could still have happened. I know I could have followed many of the strands further, but did not want to. I wanted a sense of disintegration towards the end and structured it accordingly.

Q. Tell us a little bit about yourself. What’s an average day like? I read that you have a dog.
I’ve had dogs since I was a child and right now we have three, one of whom is a very little puppy we found a month ago wandering lost on the hill highway.

For the greater part of the year, we live in Ranikhet, a small hill town in Uttarakhand, and my husband Rukun Advani and I run a press called Permanent Black, which publishes history and politics. Most days are a combination of long walks, designing, writing, cooking or pottery, which I’ve done, not very well, for many years. 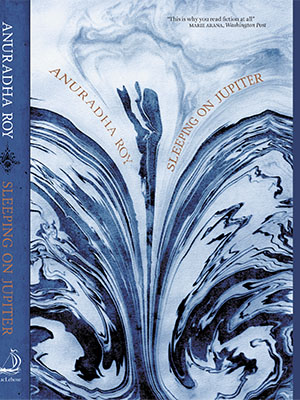 Q. What kind of work do you do at Permanent Black. Why did you start it?
We started Permanent Black in 2000. We were both at the OUP (Oxford University Press India) and it seemed a natural progression to start our own press. I used to acquire and edit books, but found that difficult once I started writing. Now I only design our covers. I love design work partly because I feel I am using a totally different part of my brain.

Q. What are you reading now? Do you have a poem or a poet you go back to often?
I’m reading In Defence of Dogs by John Bradshaw, and a manuscript on Maoists, which is very good. I do read quite a lot of poetry and have favourites such as Elizabeth Bishop and Anne Stevenson whom I go back to. For Sleeping on Jupiter, I read a lot of Bhakti poetry in translation.

Q. What do you think of the state of Indian writing in English? What do you like or dislike about it?
From what publishers and distributors say, all the buzz around new titles and lit-fests is not reflected in sales. Only a few titles in English sell in large numbers and, on the whole, reading is not a priority in this country. There was one writer in English—I can’t remember who—who claimed he had never read a book in his life. There are lots of interesting writers and a brilliant new wave of translations, but writing in English can’t be in a great state if there is so little reading.