The government has mentorship programs, but greater changes including readily available toolkits for training, and economic rebates for sectors that largely have women functionaries are the need of the hour for women's complete assimilation into the digital economy 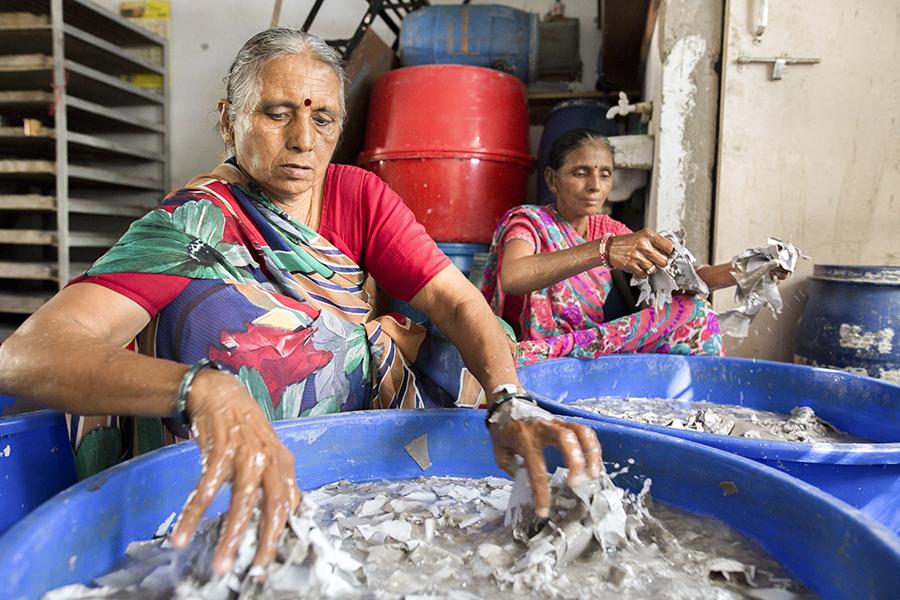 The impact of any global crisis is rarely ever gender neutral, and Covid-19 is not an exception. Countless women across diverse geographies have experienced an increase in their domestic workload, alongside the shrinking or complete loss of their livelihoods. While the entire world is facing unprecedented challenges, women are largely bearing the brunt of the economic and social fallout of Covid-19. Women from marginalised communities, employed in the informal sector in semi-urban and rural areas, are especially susceptible to loss of avenues of income, and added hours of unpaid labour with daycare and schools shutting down.

The scenario in India is no different. Here, the struggle for women employed in the informal sector, or in running small business enterprises is even more pronounced. Women now have to balance their jobs and and household responsibilities. Deeply rooted patriarchal constructs that are an integral part of India’s socio-cultural fabric have been internalised in women’s psyche, often preventing them from sharing the burden of household chores with the rest of their family.

According to the Centre for Monitoring Indian Economy, unemployment levels in the country have moved into double digits. The percentage of unemployed individuals stood at 14.3 percent for the week ending on May 23, with over 17 percent unemployment in urban India, and nearly 14 percent in rural India. In fact, our recent study under the UdyamStree campaign had 57 percent of women entrepreneurs cite a deterioration in their business enterprises during the pandemic owing to factors like diminishing customer base, loss of supply chains and avenues of funding shutting down.

In the face of such adversity, the key to survival lies in the quick adoption of new business models that cater to what has now become the ‘new normal’. Business models that were primarily dependent on offline production or delivery models, experienced a far greater decline than those reliant on digital channels.

Reinvention of business models to stay relevant became the need of the hour, with many women entrepreneurs upgrading and transforming their enterprises to digitally accessible models. With the announcement of the lockdown in India, a group of women weavers from Gujarat led by Muskanbehen Vohara were overcome with anxiety. Theirs was a traditional business venture that functioned on a human interactive model. The Leelawati Project by the Self-Employed Women’s Association (SEWA) – a membership-based organisation that seeks to improve the lives and livelihoods of women who work in the informal sector; including seamstresses, artisans, vendors, and small and marginal farmers – became the key to Muskanbehen’s business staying afloat.

What started off as a training model to aid women entrepreneurs adapt to the forces of globalisation, had in the face of the pandemic became topical and vital to their very survival. Through the training model, women entrepreneurs were trained and encouraged to take their products online, as old models were being rendered obsolete. Social media proved to be one of the most effective marketing tools that the women had access to, with platforms like Facebook and WhatsApp being used to maintain a connect with their client base, through sharing of information and photographs of their finished products.

A study by the Internet and Mobile Association of India (IAMAI) and the research firm Nielsen, revealed that the country had 227 million active internet users in rural areas as of November 2019, compared to about 205 million users in cities. Post November 2019, there has been an addition of 30 million new internet users in rural India, with 31% being women. The pandemic that resulted in the shutting down of avenues of human interlinkages, saw more and more people turning towards digital platforms for sustenance.

Though women in rural areas were earlier aware of smartphones, they did not actively seek to use them. Jayshree Gharoda, a 30-year-old living in Gujarat’s Kutch district, never used her mobile phone for anything other than making calls. During the pandemic, and post her training with SEWA, she quickly discovered that a smartphone could open multiple avenues for her. She now uses YouTube and social media platforms to upskill herself, as well as network and market her products.

Digital financial inclusion, which was a priority for India before the onset of the Covid-19 pandemic, has now become even more crucial, with the very livelihoods of people contingent on it. Women entrepreneurs faced with the possibility of closure of their businesses, have had no choice but to adapt to digital modes of payment. They have transitioned to the digital economy, with net banking and UPI payment platforms such as BHIM, Phone Pe, Paytm, Google Pay and WhatsApp Pay being used for all financial transactions.

Digital payments, once a convenience, have now become a necessity. The digital payment model has also received a boost through the government, which is leveraging UPI and Aadhaar, to provide monetary assistance through direct benefit transfers to the bank accounts of beneficiaries belonging to lower income groups. For MSMEs and women-run businesses to survive in the post pandemic world, going digital through upskilling is undoubtedly the only way forward.

A recent study by Krea University across the states of Bihar, Chhattisgarh, Madhya Pradesh and Odisha, revealed the gravity of the impact of Covid-19 on aspiring women entrepreneurs. Of the sample of 2,083 women-led enterprises, 44.6 percent were partially interrupted, 36 percent were temporarily closed, and 10.9 percent had shut down permanently. In the face of such adversity, upskilling for inclusion into the digital economy is the only solution. Even the Indian government has laid stress on mentorship and upskilling programs for women entrepreneurs. In a bid to support the digital learning of women entrepreneurs, the National Commission of Women joined hands with the Indian Institute of Management, Bangalore, to conduct a collaborative online training program, and sponsored the digital learning of 5,000 aspiring women entrepreneurs on various facets of entrepreneurship. The spirit of determination and fortitude has inspired multiple women entrepreneurs across the country to innovate and reinvent themselves. The transformation of businesses to online models has not only ensured that they retain most of their old clientele, but has also helped them tap markets hitherto untouched due to geographical limitations.

While the pandemic has propelled women entrepreneurs into the digital economy, there remains a lot to be done for their complete assimilation. The government has encouraged upskilling and mentorship programs, but greater changes – including designing of need specific digital market and network platforms, readily available toolkits for training, and economic rebates for sectors that largely have women functionaries – are the need of the hour. The pandemic has revealed the resilience of the human spirit among women entrepreneurs, and all they need to thrive is active support across the ecosystem, through their entrepreneurial journey.

The writer is an Executive Chairperson at EdelGive Foundation

5,017
Thank you for your comment, we value your opinion and the time you took to write to us!