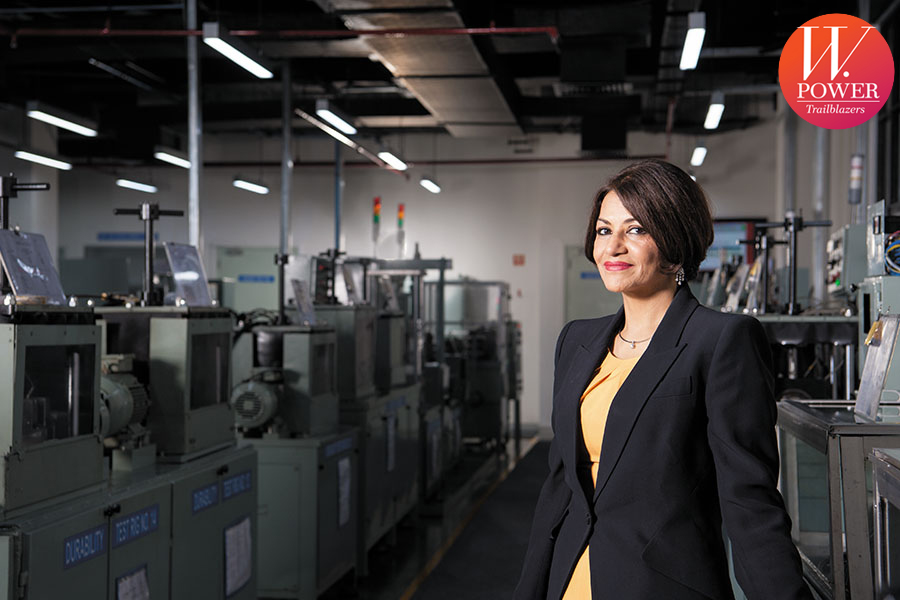 In 1997, after a little over a decade at NRB Bearings, Harshbeena Sahney Zaveri, 58, came up with an idea that the board thought was crazy. She wanted the company to set up its own research and development (R&D) centre and not be reliant on partners SNR and Torrington for technology.

As most businessmen (and women) know, money spent on research may or may not produce the desired results. Small auto component companies—NRB Bearings had a sub-₹50 crore market cap then—can ill afford to take expensive detours. Their everyday business involves manufacturing parts and reducing costs in that endeavour. Net margins are in the 5-7 percent range. “I wanted a company that, in time, had much better margins than the average and the only way it could be done was with our own technology,” she says.

Not willing to take a chance, the board told Zaveri it didn’t have the ₹12-20 crore she needed. Undeterred, she decided to renegotiate NRB’s royalty agreement with her partners and use the money saved to set up the centre. Three years on, the company had Daimler and Renault as customers and Zaveri moved up to the title of president. Her father, the late Tirlochan Singh Sahney, had set up the company in 1965.
2019 W-Power Trailblazers list
The decision transformed the company and has allowed NRB Bearings to compete head-on with multinational rivals. The company makes needle roller bushes, ball bearings and auto components for customers that include Maruti Suzuki, Bajaj Auto and Electrolux as well as clients in defence and aerospace. A loyal customer base and specialised products make for net profit margins of 10.2 percent, among the highest in the auto component universe and at par with NRB’s multinational competitors in bearings.

One reason why Zaveri hasn’t been afraid to take bold calls is because she’s worked her way to the managing director’s chair all the way from the shop floor. In 1986, the first job for the Wellesley College graduate was at the Thane plant. She noticed a divide between supervisors and workers and says there was a “colonial mindset where people looked up to our joint venture partner, Nadella”. When she questioned why things were done in a certain manner, pat came the answer: That’s the way the partner did it.

Zaveri resolved to work on building a culture where employees had the confidence to make the same products better. (It was this experience that eventually led to the setting up of the R&D centre.) Three years on, the shop floor made her well-versed with the products NRB makes and the needs of customers. It also taught her an important lesson on size and scale. “To me, size without profitability means nothing,” she says.

India’s largest auto component company Motherson Sumi has a profit after tax margin of 2.8 percent compared to 10.2 percent for NRB. Unlike auto component companies that have expanded to new product areas and geographies, NRB has chosen to stick to its original knitting and set up two facilities in Germany and Thailand. The company has made sure there is no quality compromise at its Indian plants. When local steel was not up to the mark in the late 1980s, Zaveri would travel to Delhi to secure an import licence for imported steel.

Today a large number of bearings NRB makes are custom engineered and custom made. She’s able to sit down with the engineering team and go through computer aided designs (CAD) of their bearings and suggest changes. It’s a feat she is justifiably proud of.

In addition to working on the shop floor, Zaveri, in the 1990s, maintained a punishing schedule, visiting customers as well as joint venture partners globally, and was an early believer in the rise of Japan. She worked on taking the company public in 1995. “I believe that work-life balance doesn’t exist and one must involve your children (and family) in what you do,” she says, narrating an incident about how her son would proudly tell people that her mother was invited to Tata Motors’ Pune plant for the launch of the Indica. She’d make sure she took her children along with her when she went to meet customers and suppliers.

With that kind of commitment, it is hardly surprising that Zaveri says her “life is integrated with the company” even as she spends time mentoring young women for whom it is important to have “defined long-term goals”. More recently, she has been part of the founding team at Ashoka University. Even as the company is on auto pilot with two chief operating officers, the CFO and a head of technology reporting to her, Zaveri enjoys spending time creating future leaders and believes in the immense value of learning by seeing.