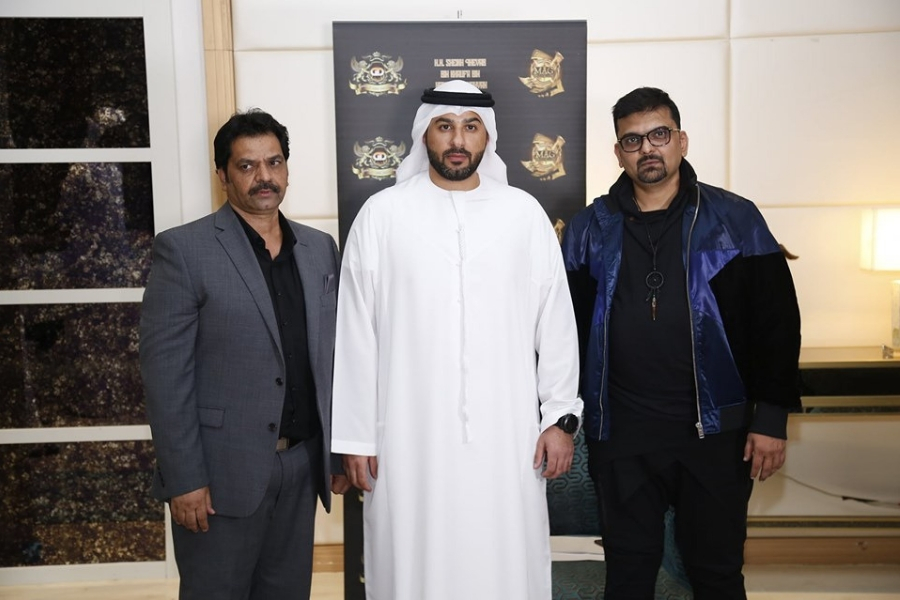 Munir Awan (Left), H.H. Sultan Saeed Rashed Saeed Alalawl (Centre) , Producer Gaurang Doshi, (Right). Bollywood is a fraternity set abuzz with announcements that mark new entries, new projects, new launches. It is what the audience expects every time there are whispers of something new cooking in Bollywood. 3 Bollywood Projects, And 1 Hollywood Project, Announced In Association With His Highness Of The Royal Family. But there is one maverick of a man who has done it in the past and is back to repeat the history – breaking the clichés – Gaurang Doshi. The creator of ‘Aankhen’ in 2002, Gaurang Doshi, returns after a long hiatus, marking his comeback with a Royal celebration. His Highness Sheikh Theyab Bin Khalifa Bin Hamdan Al Nahyan, the Sheikh of Abu Dhabi, has joined hands with Gaurang Doshi for his 3 upcoming projects in addition to a Hollywood project to be revealed early next month. Bulk of the shooting of the Hollywood project has been completed and is slated to release early next year. Raphael Bittencourt expressed his excitement to work with Gaurang Doshi, and conveyed his gratitude on behalf of the West, sharing his pride in being associated with the UAE, and India, both exemplary nations; and looked forward to proudly carry the association on their shoulders toward many mutually beneficial milestones. China Joins The Association On this occasion of the Royal Celebration, China Tourism Journalist Association extended their greetings, and congratulated all the three partners His Highness Sheikh Theyab Bin Khalifa Bin Hamdan Al Nahyan, Gaurang Doshi and Munir Awan on their successful establishment and looked forward to working together in unison on projects relating to China in the areas of tourism, culture, entertainment, fashion, lifestyle and leisure. Bollywood Projects And Director Names Announced Noteworthy names include Gaurang Doshi’s Aankhen Returns directed by Anees Bazmee, Happy Anniversary directed by Neeraj Pathak and Indians in Danger directed by Abbas Mastan. All three films are slated to release next year. Furthermore, Gaurang Doshi also announced his co-partnership with business and entertainment entrepreneur Munir Awan. In addition to many luminaries in attendance, Sultan Saeed Rashed Saeed Alalawl of the Royal family graced the event with his presence.  Ott Platform For Digital Content Announced Furthermore, he announced an OTT platform for digital content, setting foot in the digital arena too H.H. Sheikh Theyab Bin Khalifa Bin Hamdan Al Nahyan said, "I have always enjoyed Bollywood films and so do the people of Abu Dhabi. With this collaboration with Gaurang, we want to make meaningful cinema that is entertaining and enriching. This is an important step in the relationship between the two countries." An ecstatic Gaurang Doshi added, “H. H. from the Royal Family is a true visionary and has a rare talent to identify what will create opportunities. He is a wonderful person and I hope we can create magic together.” H.H. of the Royal Family is looked upon as a stalwart figure committed towards development of Abu Dhabi and this treaty between the two countries will definitely open up new avenues for Bollywood. Both the parties hope to push the boundaries of a business partnership with this collaboration and create a lifelong union between the two countries. The ground-breaking producer is ecstatic to announce a big investment in his venture by His Highness, the Sheikh of Abu Dhabi. Gaurang Doshi was all praises for Mr. Amitabh Bachchan. He said, “I’m excited to have him onboard for Aankhen Returns, and there are many more to come. My projects are incomplete without him”. Gaurang Doshi proved his mettle with his masterpieces such as Aankhen, Deewaar: Let’s Bring Our Heroes Home and Bawander, even managing to win four Limca Book records for his eccentric work. He inherited the art of filmmaking at a young age from his father late Mr. Vinod Doshi, who gave audiences, hits like Saccha Jhootha, Naastik, Dil, Beta & many more under the banner of VR Pictures.  Now being at the helm himself, Gaurang aims to deliver more unconventional content under his newly incarnated Gaurang Doshi Productions breaking more records like never before. Source: Digpu Disclaimer: This content is distributed by Digpu. No Forbes India journalist is involved in the creation of this content.