A few weeks ago, it rained spiders in an Australian city. Here's what else could fall from the skies 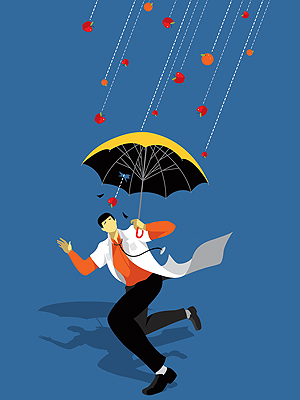 1. Frogs and fish:
Reported in the UK, India, the US and Japan, among other countries. The most plausible explanation: Waterspouts over lakes and oceans sucked the creatures, and transported them across miles. But X-Files fans might like to go with Fox Mulder: “I guess their parachutes didn’t open,” is what the FBI special agent told partner Dana Scully when frogs dropped out of the sky in Die Hand Die Verletzt.

2. Earthworms:
Reported in Norway. This April, a biologist, who was near Bergen, found a layer of worms blanketing the snow. He initially assumed the creatures had crawled their way up, but knew better once he found the snow cover to be at least half a metre thick. In 2011, too, worms had come down on a football field in Scotland.

3. Blood:
An extraterrestrial hitman or the plebian dust? Physicists debated the causes of sporadic scarlet showers—thought to have contained blood—that occurred in parts of Kerala and Sri Lanka since 1896. A recent study by Indian and Austrian scientists, however, concluded it is caused by the presence of spores of Trentepohlia annulata, a European green microalgae.

4. Coloured snow:
Several Russian cities had reported stinking orange snow in 2007 and again in 2015. This February, Chelyabinsk, which was once hit by a meteorite, woke up to a blanket of blue snow. While the orange hue has been blamed on industrial pollution, the blue one has been attributed to sand picked up from the Sahara by a cyclone.

5. Apples:
Over 100 apples fell from the sky at Coventry, England in 2011, pelting car windscreens and covering the street with green slush. Freakish weather conditions are said to be behind the apple shower, but conspiracy theorists were rife with speculation that ranged from plane cargo drops to witches.

6. Golf balls:
In 1969, a city in Florida woke up to a shower of golf balls. Experts say a passing tornado might have gobbled up some balls along Florida’s western gulf coast, home to several golf courses, and transported them to Punta Gorda to kick off a tee party.

7. Money:
Finally, something to look forward to. A rain of 500 UAE dirham notes broke out on a road in a Middle Eastern city, variously reported as Kuwait City or Dubai, early this year. The bills were carried by strong winds but nobody knows where they were flown from. No, Aamir Khan wasn’t robbing a bank either (remember, Dhoom 3)?

Tweets by @forbesindia
The world's 100 most powerful women
The new oil shock: The great sweating