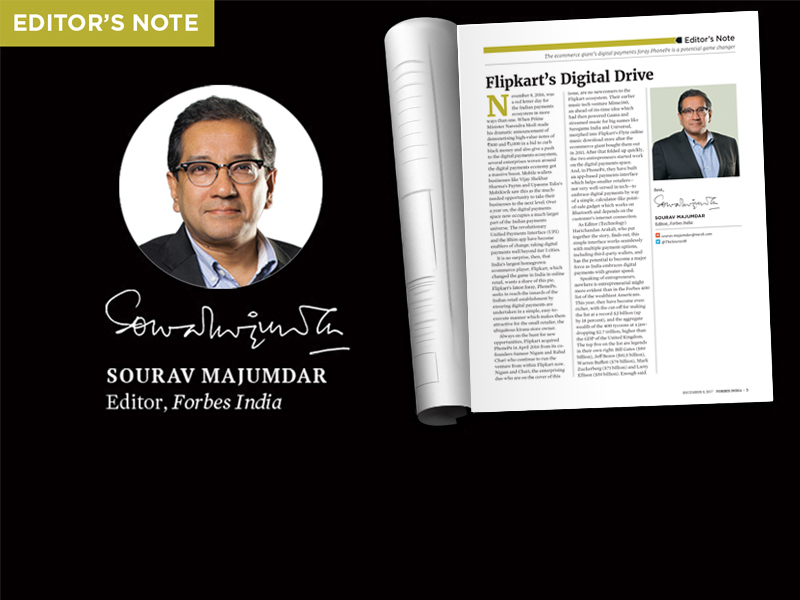 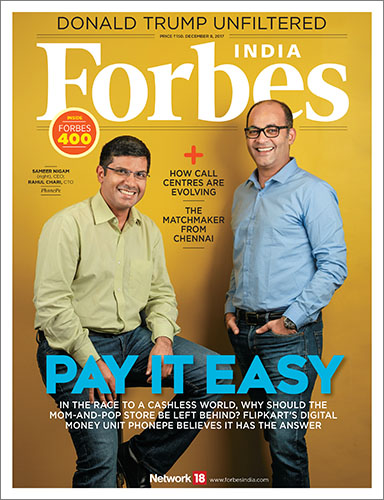 It is no surprise, then, that India’s largest homegrown ecommerce player, Flipkart, which changed the game in India in online retail, wants a share of this pie. Flipkart’s latest foray, PhonePe, seeks to reach the innards of the Indian retail establishment by ensuring digital payments are undertaken in a simple, easy-to-execute manner which makes them attractive for the small retailer, the ubiquitous kirana store owner.

Always on the hunt for new opportunities, Flipkart acquired PhonePe in April 2016 from its co-founders Sameer Nigam and Rahul Chari who continue to run the venture from within Flipkart now. Nigam and Chari, the enterprising duo who are on the cover of this issue, are no newcomers to the Flipkart ecosystem. Their earlier music tech venture Mime360, an ahead-of-its-time idea which had then powered Gaana and streamed music for big names like Saregama India and Universal, morphed into Flipkart’s Flyte online music download store after the ecommerce giant bought them out in 2011. After that folded up quickly, the two entrepreneurs started work on the digital payments space. And, in PhonePe, they have built an app-based payments interface which helps smaller retailers—not very well-versed in tech—to embrace digital payments by way of a simple, calculator-like point-of-sale gadget which works on Bluetooth and depends on the customer’s internet connection.

As Editor (Technology) Harichandan Arakali, who put together the story, finds out, this simple interface works seamlessly with multiple payment options, including third-party wallets, and has the potential to become a major force as India embraces digital payments with greater speed.

Speaking of entrepreneurs, nowhere is entrepreneurial might more evident than in the Forbes 400 list of the wealthiest Americans. This year, they have become even richer, with the cut-off for making the list at a record $2 billion (up by 18 percent), and the aggregate wealth of the 400 tycoons at a jaw-dropping $2.7 trillion, higher than the GDP of the United Kingdom. The top five on the list are legends in their own right: Bill Gates ($89 billion), Jeff Bezos ($81.5 billion), Warren Buffett ($78 billion), Mark Zuckerberg ($71 billion) and Larry Ellison ($59 billion). Enough said.