When online fashion retail brand Myntra acquired competitor Jabong in July, the deal marked another major milestone in the storied world of Indian ecommerce. It’s an all-star cast yet again: Flipkart owns Myntra, and with this acquisition, India’s homegrown etail giant has once more made its growth intentions clear. Myntra aside, Jabong, which of late is battling its own set of challenges, has been an attractive choice for investors and online shoppers alike and the $70 million deal ensures that the Flipkart-Myntra-Jabong combine will now dominate the growing online fashion market (online fashion and lifestyle is set to be a $40 billion market in India by 2020). Though some observers say there’s a degree of overlap between the two entities in terms of customers, for Myntra, the deal appears to make eminent sense. Taken together, Flipkart, Myntra and Jabong have nearly two-thirds of the online branded clothing market and the Myntra-Jabong combine has 15 million active users a month. Besides, Jabong was Myntra’s closest rival anyway, and the deal ensures Myntra won’t have to worry about competition for a while. 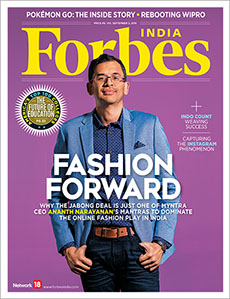 The bigger question, however, is whether the deal will help Myntra in its quest for profitability. The company’s 39-year-old CEO Ananth Narayanan feels that path remains unaltered. Narayanan, who has honed his management skills at McKinsey (where he spent a good 15 years), tells Debojyoti Ghosh and Deepti Chaudhary that Myntra would like to be profitable by the end of this fiscal. He also says he would like to get Jabong to accelerate on profitability too. Further, Narayanan will keep both entities separate since he believes they serve different sets of customers. For example, while Myntra’s focus is on men’s categories, Jabong’s strong point is women-centric products. How Narayanan integrates Jabong into the Flipkart-Myntra culture will be interesting to watch, but this deal has reiterated that consolidation will continue to be a theme in Indian ecommerce in the coming days.

We also bring you a detailed look at how Wipro’s new CEO Abidali Neemuchwala is seeking to re-engineer the company, bringing in a startup culture to regain lost ground. Neemuchwala’s strategy is critical, given that TCS and Cognizant now dominate the pecking order in the Indian IT space, and Infosys is also undergoing a significant makeover.

This issue also contains the definitive Forbes list of America’s Top 100 Colleges. The ranking, topped by Stanford University, is based on some key metrics—student debt, graduation rates, post-grad salaries etc, as well as financial health and a Grateful Grads Index. Read on to know more.