Several animals now working on a trial at Helsinki's airport have been trained to detect the virus by scent on arriving passengers, with promising results 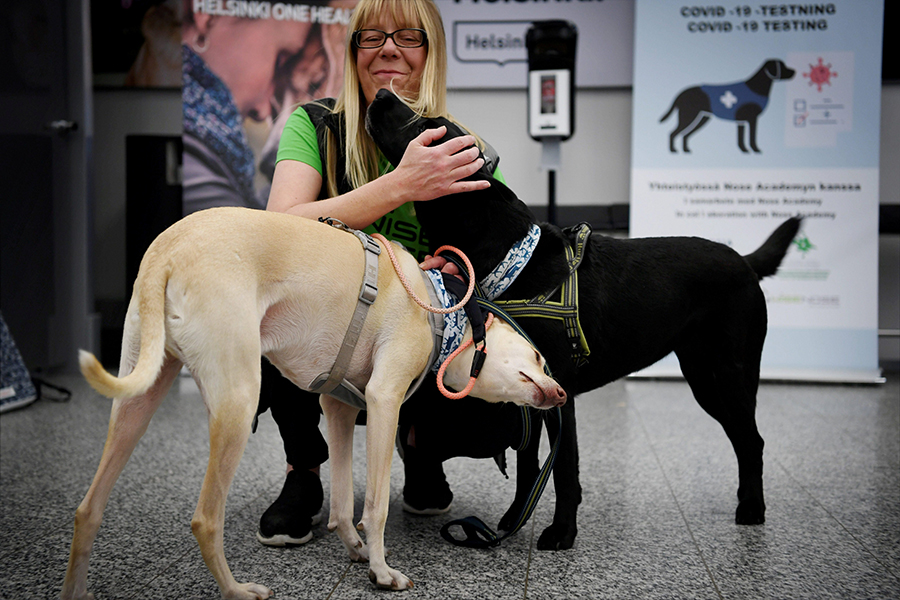 Trainer Susanna Paavilainen is seen with Kossi (L) and Miina, sniffer dogs being trained to detect the coronavirus from the arriving passengers' samples, at Helsinki Airport in Vantaa, Finland September 22, 2020.​
Travelers arriving at Helsinki’s airport are being offered a voluntary coronavirus test that takes 10 seconds, with no uncomfortable nasal swab needed. And the test is done by a dog. A couple of coronavirus-sniffing canines began work at the Finnish airport Wednesday as part of a pilot program that aims to detect infections using the sweat collected on wipes from arriving passengers.
Over the past months, international airports have brought in various methods to detect the virus in travelers, including saliva screenings, temperature checks and nasal swabs. But researchers in Finland say that using dogs could prove cheaper, faster and more effective. After passengers arriving from abroad have collected their luggage, they are invited to wipe their necks to collect sweat samples and leave the wipes in a box. Behind a wall, a dog trainer puts the box beside cans containing different scents, and a dog gets to work. The dogs can detect a coronavirus-infected patient in 10 seconds, and the entire process takes a minute to complete, researchers say. If the dog signals a positive result, the passenger is directed to the airport’s health center for a free virus test. Why dogs? Dogs have a particularly sharp sense of smell and have long been used in airports to sniff out bombs, drugs and other contraband in luggage. They have also been able to detect illnesses such as cancer and malaria. So in the middle of a pandemic, training dogs to detect COVID-19 became an obvious choice, said Anna Hielm-Bjorkman, a researcher at the University of Helsinki who is monitoring the trial. And they seem to be doing the job, she said. In the first stage of the trial, the dogs could sniff out the virus in a person who is asymptomatic, or before the symptoms appear. They detected it at an earlier stage than a PCR test, the most widely used diagnostic tool for the new coronavirus. In July, researchers at the University of Veterinary Medicine Hannover in Germany also found that with a week of training, dogs were able to distinguish saliva samples of people infected with the coronavirus from noninfected samples with a 94% success rate. Dogs seem to not be easily infected with the coronavirus, although they appear to have been in a few instances. Other animals like cats appear to be much more susceptible. There is no evidence that dogs develop any symptoms or that they can pass the virus on to people or other animals. How do they do it? The sniffer dogs, who are trained to recognize the virus’s scent, detect it by smelling urine or sweat samples, according to the University of Helsinki’s veterinary faculty. Hielm-Bjorkman said she and her team had trained the dogs by making a specific sound as soon as the dogs indicate a positive sample — “and yes, a treat, too,” she said. When the dogs smell a negative sample, nothing happens, and they move on to the next. Wise Nose, a Finnish organization that specializes in scent detection, partnered with the faculty to train 16 dogs, four of which are starting work at the airport this week. Six are still in training, and the others were unable to work in a noisy environment. “All dogs can be trained to smell the coronavirus, but they are individuals, and not all of them can work in an airport,” said Virpi Perala, a representative of Evidensia, a network of hospitals and veterinary clinics that funded the trial’s first stage. Does this mean the coronavirus has a scent? This is what researchers believe. But what exactly the dogs detect when they sniff out the virus is the million-dollar question, Hielm-Bjorkman said. “We know how dogs detect it — by smell — but we have no clue what they detect yet,” she said. “If we find this out, we can train thousands of dogs across the world.” U.S. scientists are investigating whether an infected person secretes a chemical that dogs can smell. And a French study published in June found “very high evidence” that the odor of an infected person’s sweat was different in a way that dogs could sense. Could this become a thing? The pilot program in Finland is the first to be used at an airport. Susanna Paavilainen, managing director of Wise Nose, said she aimed to have 10 dogs working at the airport by the end of November, and Hielm-Bjorkman of the University of Helsinki said she would collect data until the end of the year. More such programs could also be on the way. In recent months, trials conducted in Britain, France, Germany and the United States have assessed how dogs could detect the coronavirus. In Finland, researchers say that if the pilot programs prove effective, dogs could be used in retirement homes to screen residents or in hospitals to avoid unnecessary quarantines for health care professionals. But scaling up such programs could be tricky: Dogs need to be trained and then assisted by their trainers once they can work outside laboratories. At the Helsinki airport, two dogs worked simultaneously Wednesday while two others rested. Hielm-Bjorkman acknowledged that the resources were modest — at least for now. The program will try to assess how long dogs can work in a day and whether the same animals can be used to detect substances like drugs. Perala, of the Evidensia network, said that Finland would need 700 to 1,000 coronavirus-sniffing dogs to cover schools, malls and retirement homes but that more trained animals — and trainers — would be required for even broader coverage. “We could keep our country open if we had enough dogs,” she said.