Three years after a cancelled tour, hospitalisation and claims of $53 million in debt, hip-hop superstar Kanye West has one of the biggest hits of the decade—and it has nothing to do with music. His billion-dollar Yeezy sneaker empire is the best bet in a generation to topple Air Jordan. Sometimes it pays to be a control freak 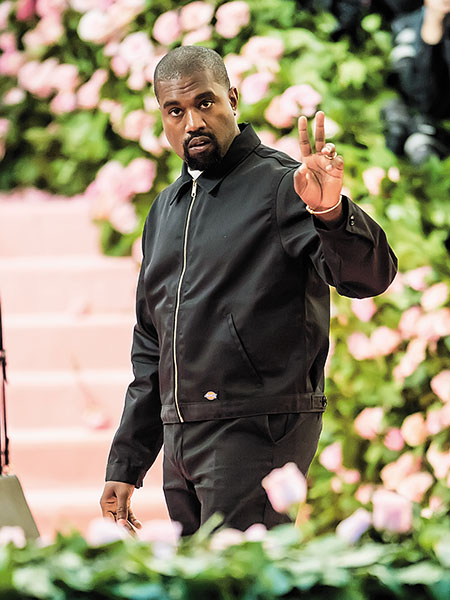 Mostly because of the shoes, Forbes pegs Kanye West’s pre-tax income at $150 million over the past 12 months
Image: Gilbert Carrasquillo / GC Images

You know when Kanye West is coming. His matte-black Lamborghini SUV rumbles up his gated driveway on the outskirts of Los Angeles like an earthquake, and when he steps out, in a white T-shirt and dark sweats, the obsessiveness kicks in immediately. First, there’s the house: The lushly landscaped exterior of the property he shares with his wife, Kim Kardashian West, and their four children (North, Saint, Chicago and Psalm) serves as stark contrast to the unadorned alabaster walls within. Nearly every surface is a monastic shade of white. The floors are made of a special Belgian plaster; if scuffed, the delicate material can be repaired only by a crew flown in from Europe. “The house was all him,” Kardashian West later tells me. “I’ve never seen anyone that pays such attention to detail.” As I step into the foyer, a handler asks me to wrap my black-and-grey Air Jordan high-tops in little cloth booties. To my left is West’s library, its shelves stacked with the likes of Alexander McQueen: Savage Beauty and Takashi Murakami: Lineage of Eccentrics. He fiddles with the positioning of a few books that seem off-kilter. Settling into an armchair opposite me, he surveys his interviewer closely. “The first shoe I remember sketching was the Jordan One that you’re wearing right now,” says West, 42. “God does have a way of lining things up.” West’s precision turned him into one of the world’s most popular musicians. “He went and executed it to another level,” says DJ Khaled, who has spent time with West in the studio and joins him on this year’s Celebrity 100 list of the world’s highest-paid entertainers. But as with Michael Jordan in the 1990s, the key to West’s wealth stems from sneakers. His Yeezy shoe line, which he launched with Nike in 2009 and then brought to Adidas in 2013, has the 34-year-old Jordan empire in its sights, in terms of both cultural clout and commercial prowess. The Jordan line does approximately $3 billion in annual sales; West’s upstart is expected to top $1.5 billion in 2019 and growing. As with the floor and the booties and the book positions, West fixates over sneaker details; he idolises Steve Jobs, preferring a limited, carefully chosen number of products with an endless array of colourways. The iPod in West’s world: The ubiquitous, chunky-bottomed Yeezy Boost 350s, which come in dozens of varieties of the same shoe and account for the bulk of Yeezy’s sales. “I am a product guy at my core,” West says. “To make products that make people feel an immense amount of joy and solve issues and problems in their life, that’s the problem-solving that I love to do.” The obsessiveness is unrelenting. When Forbes shot West for a possible cover, he insisted on wearing a black hoodie. Urged to return the next day to try again, West obliged—wearing the same hoodie. He’s been known to edit albums days after they’ve already been released. And when he didn’t feel I was properly absorbing the religious influence on his business (coming from the guy who calls himself Yeezus and is working on an album tentatively titled Yandhi), he called my editor impromptu on a Saturday evening to hammer the point some more. Whatever, it’s working. Mostly because of the shoes, Forbes pegs his pre-tax income at $150 million over the past 12 months; his team insists the number is even higher, partly due to his Yeezy apparel. In any case, it’s by far the best stretch of his career, good for No 3 on our Celebrity 100 list. Rewind to three years ago, when West claimed to be $53 million in debt, just before cancelling the back of a lucrative arena tour and checking into a Los Angeles hospital for over a week with symptoms of sleep deprivation and temporary psychosis. West credits his turnaround to religious beliefs (“being in service to Christ, the radical obedience”)—and, on occasion, to being bipolar. Call him creative, call him chaotic—just don’t call him crazy. Like some entrepreneurs with conditions like ADHD and Asperger’s, he sees his diagnosis not as a hindrance but as a “superpower” that unlocks his imagination. “‘Crazy’ is a word that’s not gonna be used loosely in the future,” West says. “Understand that this is actually a condition that people can end up in, be born into, driven into and go in and out. And there’s a lot of people that have been called that ‘C’ word that have ended up on this cover.” 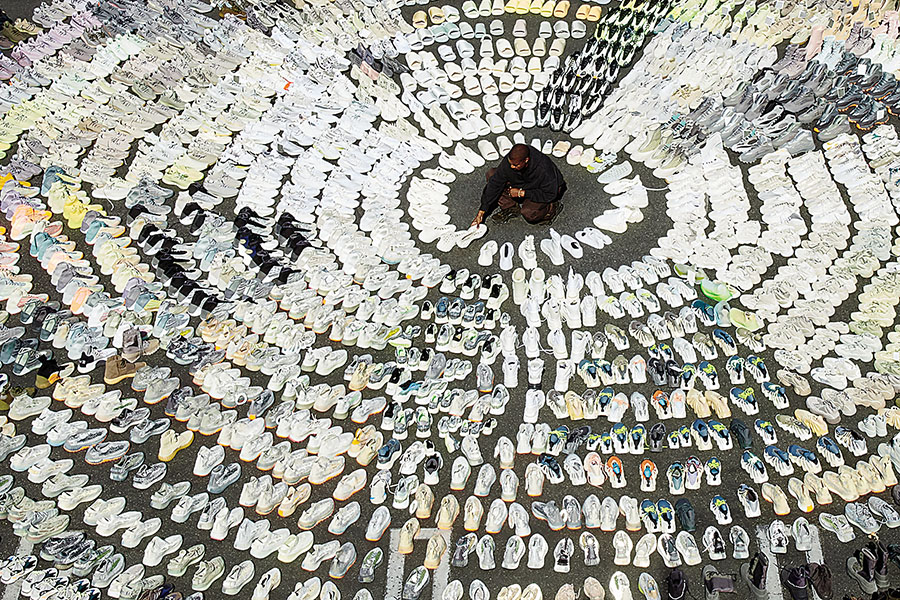 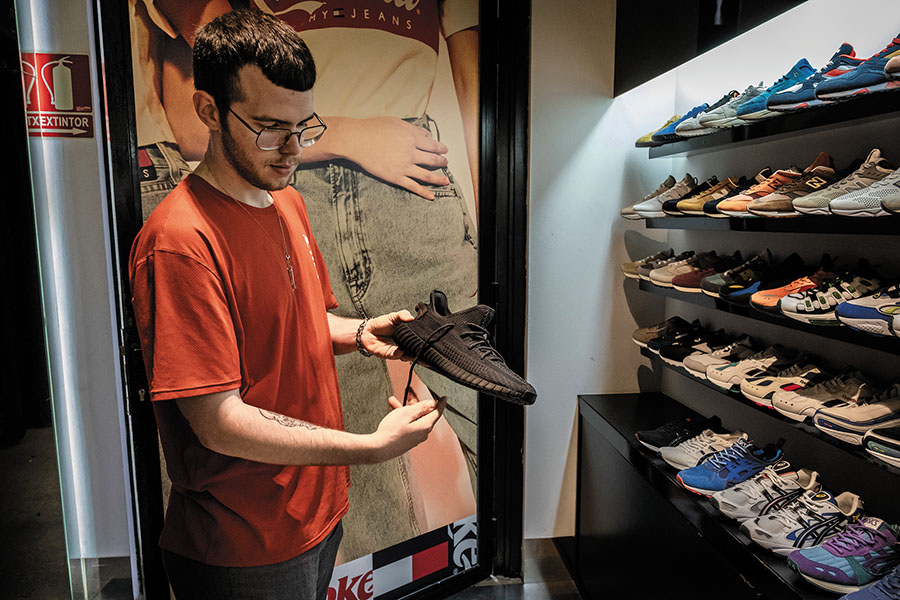 A seller with the new Adidas Yeezy Boost 350 shoe model

***** For a company that makes Lamborghini-inspired sneakers, Yeezy’s headquarters are remarkably nondescript: A blocky blue-and-grey building just off the main drag in Calabasas. It’s not far from where he’s been hosting his recent Sunday Services—gatherings where popular songs are repurposed with Christian themes by gospel choirs and famous guests from Katy Perry to Dave Chappelle. When I meet up with West after his return from San Francisco, he doesn’t even mention the investor meeting—already fixated on something else enormous out back. In the parking lot behind his office, laid out in concentric circles, is the sum total of West’s creative output at Adidas: A trove of sneaker prototypes baking in the midday sun, variants of his 350s in a rainbow ranging from blood orange to creamy pistachio alongside a few yet-to-be-released gems like the almost triangular Yeezy basketball shoe (which, he adds almost proudly, has yet to be approved by the NBA—echoing the days when the league fined Michael Jordan for wearing his eponymous sneakers because they violated uniform rules). West scoops up a 1050 Vortex Boot, which debuted in prototype form at Madison Square Garden in 2016. “I just looked at this line right here,” he says, motioning to a thin strip of blue masking tape on the sole. “I’m going to make this part of the boot. The inside of this will be blue. And I just go with the flow.”

There are about 1,000 pairs laid across the lot, it seems, but when I ask West for the exact tally, he seems almost offended at the notion of reducing his creations to numerals. “You can’t calculate love,” he explains. “If you get a surprise cake from your grandmother, and you didn’t know she was in town, do you start asking her about the batter and specifically the frosting?” Grandmother? “These things are made to bring incalculable joy,” he continues. “So to ask me to somehow translate this to numbers is to ask your grandmother exactly what the recipe of the cake was.” West claims to not be a “numbers guy”, but he has reached an inflection point where someone in the Yeezy orbit needs to be. His brand built its following through its limited releases and surprise drops, much like Air Jordan. The latter, according to NPD retail analyst Matt Powell, has lost a bit of its cachet in recent years as Nike moved to fill declining volume in other areas of business with its iconic sub-brand. “What makes celebrity products sell so well is scarcity,” he says. “So if they make it too broadly available, I think it crashes the business model.” Adidas seems to be aware of this. “We are continuing to manage volumes in a very disciplined manner so that for 2019 Yeezy sales will not make up a significant share of Adidas’s overall expected sales growth,” says the company’s chief executive, Kasper Rørsted. “Not because brand heat is decreasing, but because we have a disciplined approach to managing volumes and product lifecycles.” In other words, he’s not willing to chase sales at the expense of prestige, instead continuing to build buzz with surprise drops. The May release of the glow-in-the-dark 350 v2 sold out immediately, even though it rolled out at 6 am in some countries. In June, customers lined up around blocks in Moscow to get a reflective version of a sneaker that had already debuted in the US. There are even more far-out concepts in the works, including a shoe made out of algae that will biodegrade completely over time in landfills—or almost immediately if sprayed with a certain type of bacteria. Perhaps most impressively, West still owns 100 percent of Yeezy. This is the reason he became a centimillionaire many times over much earlier in his life than Jordan. Given Yeezy’s success, West should eventually join the NBA legend—alongside sister-in-law Kylie Jenner and mentor Jay-Z—in achieving billionaire status, though the never-modest West would claim he’s there already. And then some. “We’ve yet to see all of the beauty that would be manifested through this partnership,” West says. “We’ve only experienced a small glimmer of light.” Additional reporting by Monica Mercuri and Natalie Robehmed