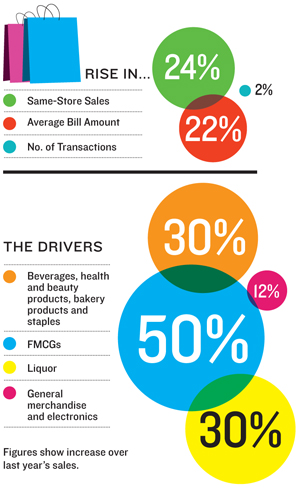 Over the past few years, retailers have successfully managed to turn Independence Day into the centre of a shopping festival of sorts, with the days before and after August 15 witnessing thousands flocking at multibrand retail stores in the bigger cities.

This year was no different. Between August 11 and 15, Spencers saw an average growth of 24 percent in same-store sales over last year’s figures. There was a 2 percent increase in the number of transactions. But if the rise in the number of people who are spending at their stores is small, the rise in the amount people are spending is noteworthy. The value of bills saw an average increase of 22 percent.

Sales in the large Spencers store were driven by FMCGs, which saw an increase of 50 percent over last year’s sales figures.