Of the 56 Indian companies on the Forbes Global 2000 list of the world's top companies, 25 have improved their rankings since last year

The timing of the annual Forbes Global 2000 list, comprising the world’s largest publicly traded companies, coincides with the first anniversary of the Narendra Modi-led government. And much like the Centre’s report card, corporate India’s performance has been both good and bad: After two consecutive years of decline, the number of Indian companies featured in the 2015 list has risen to 56, up from 54 last year. But India Inc has still to climb its way back to the 2012 high of 61 companies.

Among the BRICS nations (Brazil, Russia, India, China and South Africa), India’s contribution is second to that of China’s, which is far ahead with 232 companies. Of the 56 Indian businesses that have made the cut, 25 have improved their rankings over 2014; seven are new entrants; the rest have witnessed a decline. 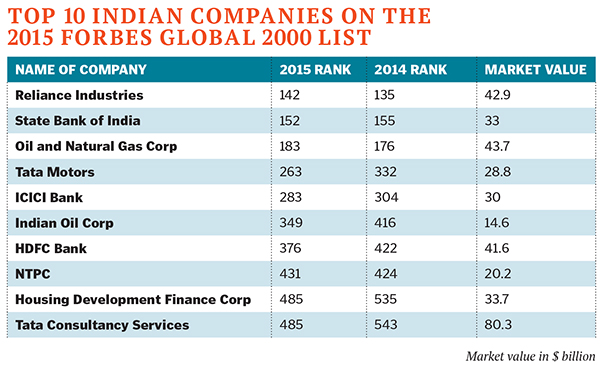 Heading the Indian brigade once again is the Mukesh Ambani-led Reliance Industries Ltd (RIL) with sales of $71.7 billion and market value of $42.9 billion. But RIL has slipped seven positions from its 2014 ranking to now stand at 142. (Disclaimer: Reliance Industries owns Network 18, the publishers of Forbes India.)

In keeping with last year’s trend, RIL is followed by India’s largest lender, State Bank of India ranked 152 (it was 155 last year) and Oil and Natural Gas Corporation (ONGC) at 183. Other state-run banks like Bank of Baroda (832) and Canara Bank (1026) slid in rankings when compared to 2014.

Some companies that have done well belong to the state-run oil and gas sector like Bharat Petroleum (757) and Gail India (1018). It’s worth noting that Bharat Petroleum has risen by 288 ranks. The drop in crude oil prices has improved the financials of these firms as they no longer had to sell fuel at subsidised rates. Information technology firms, Tata Consultancy Services (485), HCL Technologies (1007) and new entrant Tech Mahindra (1729) have also fared well with a depreciating rupee bolstering their earnings.

The biggest climber among Indian companies was the recently restructured Adani Enterprises, the flagship firm of the Ahmedabad-based conglomerate. It is ranked 944th, up 289 spots from last year.

India’s performance on the list reflects Modi’s first year in office. Indian companies have improved their standing among the world’s biggest players, but it may be too premature to call it a resurgence.