Champagne makers often have the prestigious name usurped by rival producers, but Vladimir Putin has upped the ante by signing a law reserving the appellation for Russian sparkling wine that has prompted a call for a bubbly blockade 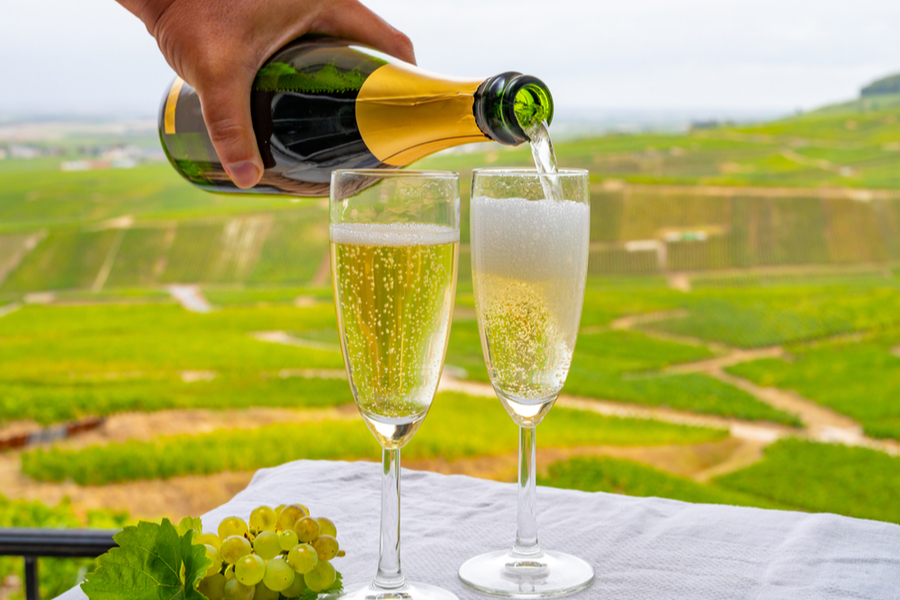 French champagne producers are fiercely jealous of the AOC—or Appellation of Controlled Origin—that is supposed to give them exclusive use of the word in countries that adhere to the Lisbon Agreement on distinctive geographical indications.

But Russia is not a signatory, and President Vladimir Putin signed a law last week that will forbid the use of the Russian translation of champagne—"Shampanskoye"—on imported bottles.

French producers can still use the word in French, but will also have to write "sparkling wine" in Cyrillic on the back of bottles—a heresy for brands that say nothing on Earth can match their pizzazz.

"Denying the Champenois the right to use the name 'champagne' in Cyrillic is scandalous: it is our common heritage and the apple of our eye," Maxime Toubart and Jean-Marie Barillere, co-presidents of France's Champagne Committee, said in a statement.

Foreign Minister Jean-Yves Le Drian jumped into the fray as well, telling the national parliament Tuesday that if necessary, France would take the issue to the World Trade Organisation (WTO).

"We will act in the coming days with Russian authorities, on the bilateral and European level, to defend our producers' interests and above all the interests of our geographical indications," Le Drian said.

"If there are more blatant violations of the World Trade Organisation rules, then we will move ahead, as we have already considered doing with Russia.

"I hope that dialogue will allow us to resolve this problem," he concluded.

Though Russia may not be the world's biggest champagne market—it ranks 15th in terms of the number of champagne bottles it imports —it's an important one because Russians tend to buy expensive bottles.

The committee, which groups grape growers and producers in France's Champagne region, also called on diplomats to push for a change of the "unacceptable law", and urged members to halt all shipments to Russia until further notice.

Moet Hennessy, owned by the luxury conglomerate LVMH, already said Sunday that it would comply with the law and would resume exports of its brands, including Dom Perignon, Moet & Chandon and Veuve Clicquot, "as soon as possible".

Cigarettes, perfume and sorbet
The Champagne Committee said the new law "calls into question more than 20 years of bilateral talks between the European Union and Russia on the protection of AOCs".

It railed against Russia for not informing producers in advance of the change and said it is "determined to pursue discussions with the Russian authorities to obtain the exclusive right to the champagne name".

Launched in 1937 under Joseph Stalin, the "Sovetskoye Shampanskoye" brand aimed to make the elite bourgeois drink acceptable for the proletariat.

It was produced en masse and sold at affordable prices, but was recognised as being pale imitation of the French product.

After the collapse of the Soviet Union, the "shampanskoye" label persisted, which began to pose problems for Russia, especially after it joined the WTO in 2012.

According to the association of Russian makers of sparkling wines, total output can reach 220 million bottles per year, the bulk of which use a very different production method from the one used in France.

As suggested by the term AOC, the right to label a product is restricted to those made in the region. Champagne makers also have to follow strict production methods.

It's a name that champagne makers have been battling to protect since 1843.

And the fight has not just been about using the name on sparkling wine.

They've worked to block a whole range of unrelated products from trying to profit from champagne's reputation, from cigarettes to an Yves Saint Laurent perfume.

Most recently they won a case against German supermarket chain Aldi over a champagne-flavoured sorbet, because it was judged to not taste of champagne.

It's a battle many in France will continue fighting "without fail", Trade Minister Franck Riester said on Twitter.