Called Xupermask and made of silicone with athletic mesh fabric on the sides, it comes with three dual-speed fans, a filtration system, as well as noise-cancelling headphones, LED lights for nighttime, a rechargeable battery and bluetooth capability 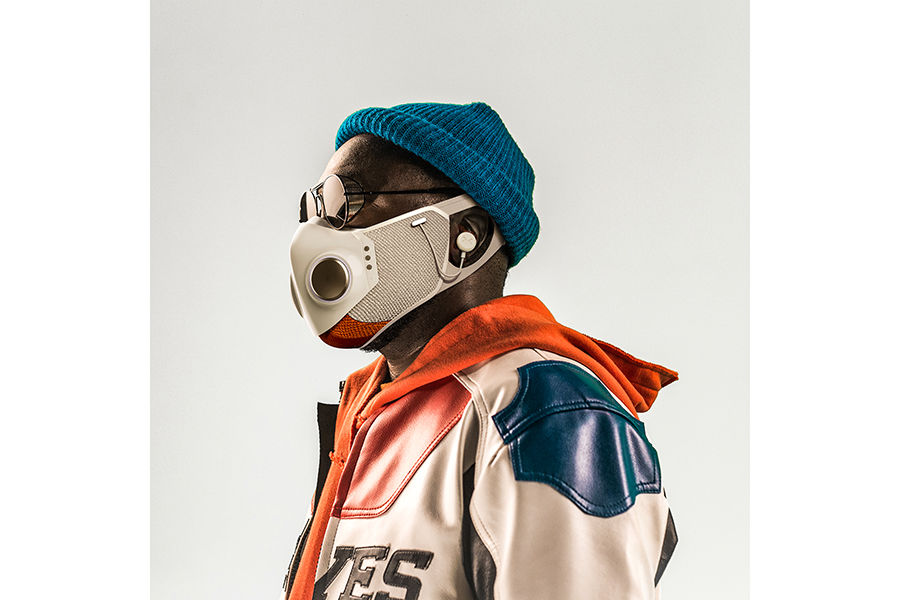 An undated handout photo, artist Will.i.am in the Xupermask, made by Honeywell. After the surgical mask and the do-it-yourself mask and the fashion mask: the smart mask.
Image: via The New York Times

To be specific, he was watching Will.i.am, the rapper, entrepreneur and founding member of the Black Eyed Peas, cavorting around wearing what appeared to be a cross between a gas mask and an alien space helmet. So he called Will.i.am, whose full name is William Adams and who has been a regular at Salesforce’s Dreamforce tech conference since 2010, and asked what in the world he had on his face. Will.i.am said it was an idea he had been noodling. So Benioff told Will.i.am that he really ought to talk to Darius Adamczyk, CEO of Honeywell, the multinational conglomerate that happened to be responsible for making millions of N95 face masks over the last year. Benioff made the introduction, and Thursday the results of that conversation reached the market. After the surgical mask and the do-it-yourself mask and the fashion mask: the smart mask.
“It’s a new category,” said Will Lange, Honeywell’s chief commercial officer for personal protective equipment. Called Xupermask and made of silicone with athletic mesh fabric on the sides, it is a joint venture between Will.i.am and Honeywell. It fits snugly around the bottom half of the face and comes with three dual-speed fans, a Honeywell HEPA filtration system (which the company is careful to say is not medical-quality), as well as noise-canceling headphones, LED lights for nighttime, a rechargeable battery and Bluetooth capability. It allows you to play music and take calls, has a seal over the nose to keep glasses from fogging and makes the wearer look sort of like a sci-fi rhino warrior. It’s not exactly subtle. The mask costs $299, which is very expensive for a simple face mask but the average top-end price for noise-canceling headphones (less than Sony and Bose, more than Apple). It was designed by Jose Fernandez, the Hollywood costume designer who created the SpaceX suits for Elon Musk and worked on “Black Panther,” “The Avengers” and “X-Men 2.” And it is sold in direct-to-consumer, Supreme-style drops. It’s a bet, in other words, that hypebeast culture will embrace the mask. Coming just as vaccines are being more widely distributed and just as states like Texas, Indiana and Mississippi are relaxing mask mandates, the debut represents either the future of face masks or yet another fashion-tech misfire. “We are living in sci-fi times,” Will.i.am said. The pandemic, he said, “is straight out of a friggin’ movie. But we are wearing masks from yesterday’s movie. So I wanted to make a mask to fit the era that we’re in.” That means, in part, learning the lesson of the sneaker. (Well, and the smartphone. The sneaker and the smartphone combined!) After all, what are shoes, Will.i.am said, but protective equipment for the feet? We’ve just forgotten that was their original purpose because shoes have become a form of self-expression. You could not, he pointed out, “walk into a mall or a restaurant or an airplane without shoes on,” just as you aren’t supposed to walk into any of those places without a mask. “But you don’t have to tell anyone to wear shoes,” he said. Therefore, if you can make a mask serve the same purpose (or multipurpose), you win. Will.i.am was speaking via Zoom from his HQ in Los Angeles, a space that contains a sound stage, a recording studio, his “fab lab” (where he makes prototypes) and now his Xupermask team. Will.i.am got the idea for Xupermask last March, just before his 45th birthday, when he was in Britain filming “The Voice” (he has been a judge on the program for 10 years) and Europe was beginning to go into lockdown. “I was worried about not being able to come in to America, and even if I was able to get in, about being on an airplane,” he said. So he called his hardware team and told them to get working. He has been dipping in and out of technology since helping to found Beats Electronics in 2006. In 2014, he developed a fashion smartwatch called Puls and in 2016 came out with fashion earbuds you could wear around your neck like jewelry — Naomi Campbell and Kendall Jenner were ambassadors — but neither product really took off (arguably the whole wearables market is not exactly a rocket ship). He doesn’t care. He loves research and development. “I think L stands for learn, not loss,” he said. Now, however, he has the might of Honeywell behind him and plans for Xupermask-related collaborations with artists and other brands. (He won’t name names, though he did talk about how much he loved the North Face-Gucci collaboration.) And he really, really doesn’t think masks are going away anytime soon — not if recent history is any indication. “SARS happened in Japan and Southeast Asia, and they got over it, and they still wear masks,” he said, suggesting the same would be true in the West, especially since masks seemed to have helped limit flu cases, too. In any case, whatever happens on the ground, he expects masks on airplanes to be the new norm. “That’s what I’m hearing,” he said. He’s gotta feeling.

Tweets by @forbes_india
Biden backs Taiwan, but some call for a clearer warning to China
Covid-19 second wave: Why are hospitals falling short of ventilators, again?