How PayPal aims to grow market share in India 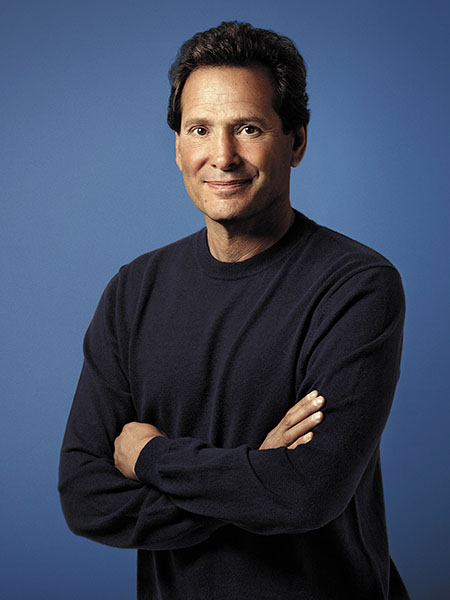 Dan Schulman believes that the digital payments space will see more changes in the next five years, compared to the past three decades put together. The president and CEO of PayPal is addressing a gathering of media professionals from across Asia and Europe at the company’s sprawling headquarters in San Jose, California, in mid-September.

Dressed in a black T-shirt, jeans and flip-flops, and seated next to Franz Paasche, PayPal’s head of corporate affairs, Schulman speaks about a variety of things, ranging from how his mother drove him to a Martin Luther King Jr rally in a baby carriage during his early childhood to the need to lend working capital to small businesses.

He also refers to how Krav Maga, the Israeli martial arts form that he practices, has taught him more than just sporting skills. “The best way to win a fight is to not get into a fight. This is what we think about in business too; finding collaborations and de-escalating tensions,” he says.

Schulman has put this learning into practice too, having moved into strategic partnerships with Visa, MasterCard and banks such as JP Morgan and Citi. This has not only benefited PayPal customers by giving them more seamless payment experiences and incentives that they want, but has also ensured that the company does not spend time slugging it out with rivals.

Sharing the spoils
PayPal’s strategy of forging partnerships has been more apparent of late, with at least 40 in recent years. “Competition is like gravity. The huge untapped opportunity ensures that everyone can get a share of the pie. While the barriers to entry are low, the barriers to scale still remain high. Partnerships are at the core of our strategy,” Schulman tells Forbes India in an email response after the interaction.

As with other digital payment firms, PayPal in India has been wooing customers with cashbacks and discounts. In May 2019, it launched the ‘OneTouch’ feature using Google Smart Lock in India, which helps users register their device with PayPal and stay securely logged into the platform for all subsequent PayPal purchases on that device. OneTouch has been the company’s most rapidly adopted product globally with over 123 million consumer accounts and more than 11 million merchant accounts as of Q4 2018.

PayPal has over 286 million customers and 23 million merchants across 200 markets. The company does not disclose country-specific numbers, but currently commands a small market share in India. Data from the ministry of corporate affairs and data intelligence firm Veratech indicate that it reported revenues of ₹258 crore from its Indian payments arm in 2018, a 12x jump over ₹21 crore in calendar year 2017. The firm, which is in “investment mode”, reported a loss of ₹2.28 crore in FY18. 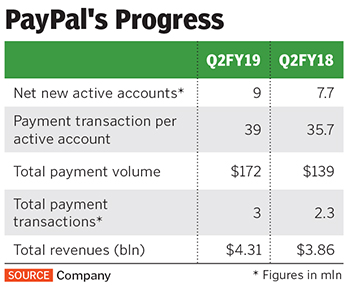 Evolving Market
PayPal in India is in a crowded space, where rival Paytm—backed by SoftBank and Alibaba—is a market leader with its mobile wallet being part of the payments bank. Other competitors in the digital payments space include Walmart-backed ecommerce and digital wallet PhonePe, Amazon Pay and Google Pay, apart from a range of fintech firms and payment banks.

Anupam Pahuja, managing director of PayPal India, says companies in the digital payments space have just covered the “first hundred metres of the marathon”. He explains that in the Indian market, where close to 90 percent payments are still made with cash, one must have a long-term view of offering a seamless and secure payment experience to “win the market”.

Given the growth opportunity, PayPal—which launched its peer-to-peer payments solutions in India in August 2016—is investing in manpower and technology at its innovation laboratories in Chennai and Bengaluru, which are the largest in the world after its San Jose headquarters.

“We are trying to explore other levels of authentication which can guarantee frictionless checkout of transactions. We are also looking at improving tokenisation,” says PayPal’s general manager (technology) Guru Bhat, who oversees the technology centre operations.

Future Innovations
At a time when Prime Minister Narendra Modi has been marketing the launch of the domestic card payment scheme RuPay in the UAE, PayPal plans to push for digital payments focussed toward the Indian diaspora internationally. It cannot ignore Unified Payments Interface (UPI), the real-time payment system developed by the National Payments Corporation of India (NPCI), which registered a transaction volume of 918 million as of August 2019, and has about 141 active banks.

“We plan to take UPI—and RuPay—worldwide. Customers of PayPal will be able to transact through NPCI using these products, in the form of international transactions in overseas markets,” says a person with knowledge of the matter, on condition of anonymity.

Another new innovation will be a frictionless transaction for Google-backed Dunzo through the PayPal system, which will be launched in Q4FY20. Using its strength in cross-border transactions and payments for freelancers, the company will continue to specialise and aim to monetise operations.
The next big move from PayPal will be if it decides to take its rapidly growing money transfer app Venmo beyond the United States. That may appear far-stretched as of now, but who knows.