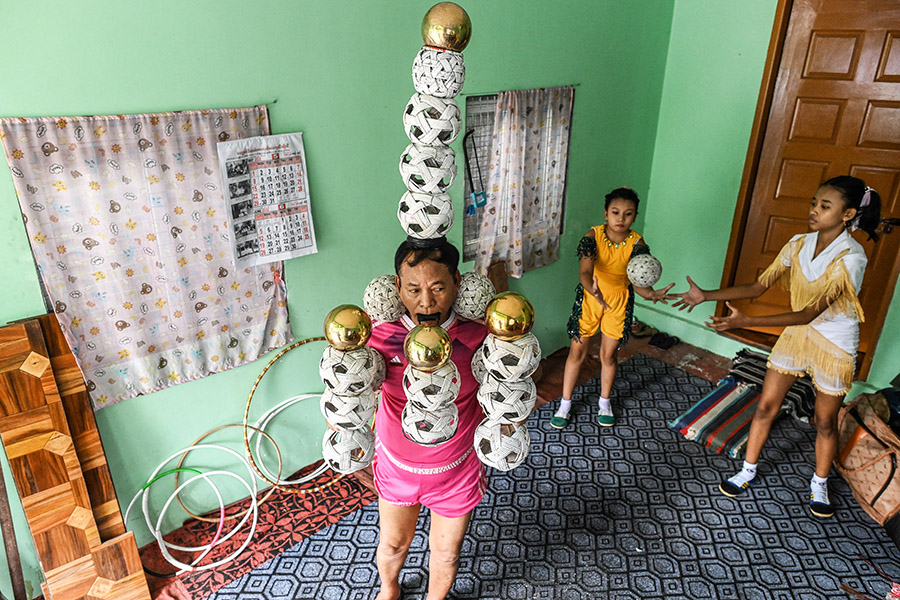 Ohn Myint started practising with Ywal in his 40s, immersing himself in the intense meditation it requires, as a way to restore movement to his limbs after he suffered a stroke. Image: STR / AFP

Han Myint Mo kicks up a gold-coloured metal ball, pirouettes and catches it on the blade of a knife held in her teeth -- keeping up a Myanmar juggling tradition on the edge of extinction.

Her grandfather and trainer Ohn Myint watches on in their living room in the commercial hub of Yangon, throwing words of encouragement at her and, later in the routine, juggling bats.

At the dizzying peak of the performance, Han Myint Mo juggles as she balances on a mini see-saw, while a hula-hoop spins around her waist and the golden ball stays perched atop her head.

"It makes me happy and strong," the 12-year-old says after the routine, for which she trains three hours a day.

The art form is thought to have begun in the early 19th century when performers at the royal court began juggling balls made of blown, coloured glass -- known as "Ywal".

But unlike conventional juggling, performers move the grapefruit-sized globes around their bodies using only their feet, knees, shoulders and elbows.

Ohn Myint started practising with Ywal in his 40s, immersing himself in the intense meditation it requires, as a way to restore movement to his limbs after he suffered a stroke.

"We can't play when we are afraid, nervous or angry," says the spry 71-year-old after giving his own demonstration.

"Our mind has to be clear like glass."Also read: Elderly Indonesian culinary legend's sweet treats stand the test of time

The discipline required to master tricks puts many off studying the art, including his three children, he says.

He despaired of passing on his knowledge until his granddaughter Han Myint Mo asked him to teach her after she watched him practise.

For previous generations, skill with the Ywal could be a ticket to travel and fame, with jugglers wowing crowds in Europe and North America.

"He starts to juggle two glass balls, such as we would hang on a Christmas tree in a way that would put to shame the most expert juggler," one San Francisco newspaper reported of a show in 1899.Also read: Curators are saving Ukraine's heritage at all costs

"But all his work in throwing, catching and tossing is done with those eloquent feet."

For their shows in malls and schools around Yangon, Ohn Myint and Han Myint Mo add more conventional juggling tricks involving bats and hula hoops to draw in small crowds.

Their performances reach a far bigger audience online: one video of the duo training has been viewed more than 3 million times.

"Sometimes when I'm practising some difficult tricks I fail many times. Then I feel depressed and have arguments with grandpa," he says.

"But he reassures me, we try again together and we manage."Also read: Echoes of 'kabbadi, kabbadi' in Hong Kong build bridges across cultures

Ohn Myint is also training a friend's granddaughter, who was inspired after watching him practise.

"I'm very glad to see my next generation playing Ywal," he says as the two girls practise in the living room.

Han Myint Mo says she is happy to carry his hopes.

"I want to be an outstanding Ywal master like my grandpa in the future," she says.

"I want to try to be better than him."