Out of Nile, into tile: Young Egyptians battle plastic plague

Entrepreneurial young Egyptians are helping combat their country's huge plastic waste problem by recycling junk-food wrappers, water bottles and similar garbage that usually ends up in landfills or the Nile 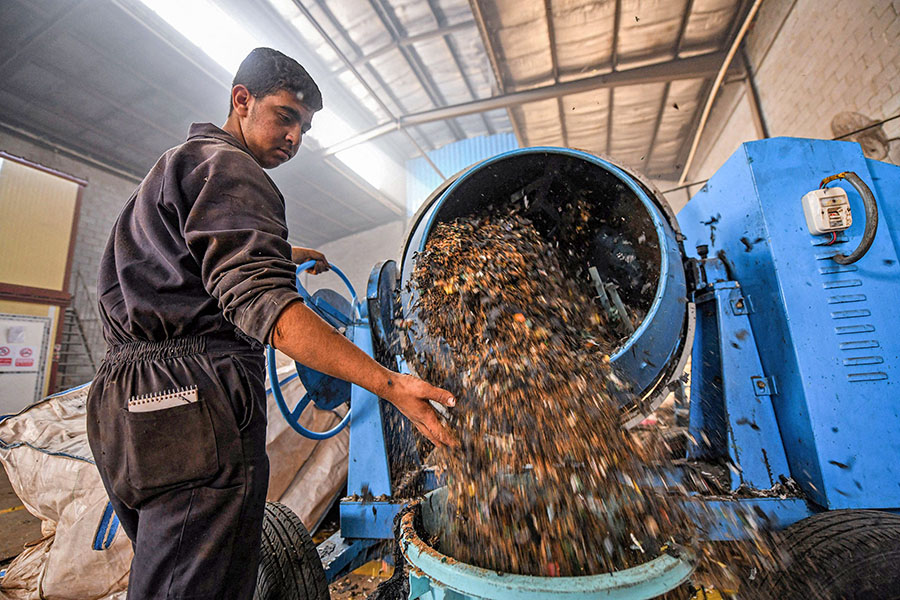 A worker dumps plastic waste out of a mixer before it is to be recycled into eco-friendly interlocking tiles used in outdoor walkways at a workshop of the startup company "TileGreen." Image: Ahmed Hasan / AFP

Entrepreneurial young Egyptians are helping combat their country's huge plastic waste problem by recycling junk-food wrappers, water bottles and similar garbage that usually ends up in landfills or the Nile.

At a factory on the outskirts of Cairo, run by their startup TileGreen, noisy machines gobble up huge amounts of plastic scraps of all colours, shred them and turn them into a thick liquid.

The sludge—made from all kinds of plastic, even single-use shopping bags—is then moulded into dark, compact bricks that are used as outdoor pavers for walkways and garages.

"They're twice as strong as concrete," boasts co-founder Khaled Raafat, 24, slamming one onto the floor for emphasis.

Each tile takes about "125 plastic bags out of the environment", says his business partner Amr Shalan, 26, raising his voice above the din of the machines.

Raafat said the company uses even low-grade plastics and products "made of many different layers of plastic and aluminium that are nearly impossible to separate and recycle sustainably".

Egypt, the Arab world's most populous country, is also the biggest plastic polluter in the Middle East and Africa, according to a multinational study reported by Science magazine.

The country generates more than three million tonnes of plastic waste per year, much of which piles up in streets and illegal landfills or finds its way into the Nile and the Mediterranean Sea.

Microplastics in the water concentrate in marine life, threatening the health of people who consume seafood and fish caught in Africa's mighty waterway—mirroring what has become a worldwide environmental scourge.

The start-up last year started selling its outdoor tiles, of which it has produced some 40,000 so far, and plans to expand into other products usually made from cement.

Egypt, a country of 104 million, has pledged to more than halve its annual consumption of single-use plastics by 2030 and to build multiple new waste management plants.

For now, however, more than two thirds of of Egypt's waste is "inadequately managed", according to the World Bank—driving an ecological hazard environmental groups have been trying to tackle.

On the shores of the Nile island of Qursaya, some fishermen now collect and sort plastic trash they net from the river as part of an initiative by the group VeryNile.

As the Nile has become more polluted, the fishermen "could see their catches decreasing", said project manager Hany Fawzy, 47. "They knew this was their future and their children's future disappearing."

Over three-quarters of Cairo fish were found to contain microplastics in a 2020 study by a group of Danish and UK-based scientists published in the journal Toxics.

Off the port city of Alexandria, further north, microplastics were detected in 92 percent of fish caught, said a study last year by researchers at Egypt's National Institute of Oceanography and Fisheries.

VeryNile, started five years ago with a series of volunteer clean-up events, buys "between 10 and 12 tonnes of plastic a month" from 65 fishermen, paying them 14 Egyptian pounds (about 50 US cents) per kilogram, Fawzy said.

Also read: In the ocean, it's now snowing microplastics

VeryNile then compresses high-value plastic like water bottles and sends it to a recycling plant to be made into pellets.

Low-quality plastics such as food wrappers are incinerated to power a cement factory which, Fawzy said, keeps "the environment clean with air filters and a sensitive monitoring system."

"We can't clean up the environment in one spot just to pollute elsewhere," he said.

The Egyptian programmes are part of a battle against a global scourge.

Less than 10 percent of the world's plastic is recycled, according to the Organisation for Economic Cooperation and Development.

The OECD said last year that annual production of fossil-fuel-based plastics is set to top 1.2 billion tonnes by 2060, with waste exceeding one billion tonnes.

In Egypt, activists have hailed what they see as a youth-led push for sustainability that has created demand for environmentally-minded solutions and products.

But while the change is welcome, they say it remains insufficient.

"What these initiatives have done is find a way to create a value chain, and there's clearly demand," said Mohamed Kamal, co-director of environmental group Greenish.

"Anything that captures value from waste in Egypt is a good step forward. But it's not solving the problem. It can only scratch the surface."

Tweets by @forbesindia
City of Busan to launch decentralised digital commodities exchange
Satvik Jagannath at Vitra.ai on building one-click translation on the fly for 75 languages