At US eateries, love for Ukraine, and wrath by proxy for Russia

With the war an ocean away, restaurants have become something of a culinary frontline for Americans to channel support for Kyiv by queuing for a seat and a pastry — while hoping to inflict a bit of pain on Moscow, if only by proxy 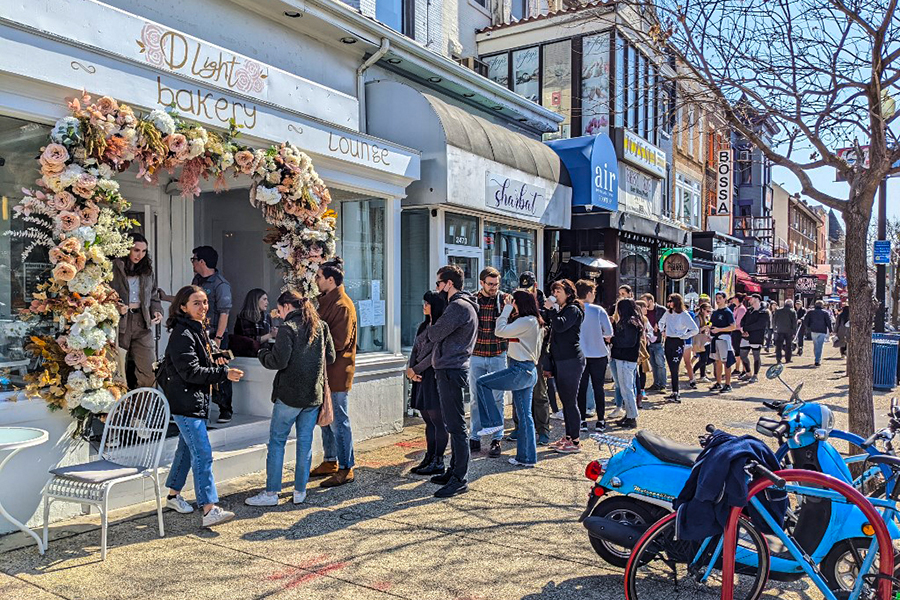 People line up outside Ukrainian-owned D Light Cafe and Bakery in Washington, DC, on March 5, 2022. - Since the Russian invasion began, lines have stretched down the street outside a Ukrainian-owned cafe in a trendy part of Washington. (Credit: Becca MILFELD / AFP)

Washington, United States: Since the Russian invasion began, lines have stretched down the street outside a Ukrainian-owned cafe in a trendy part of Washington. Blocks away, at the city's long-popular Russia House restaurant, five windows have been smashed in and owners are thinking they may not reopen.
With the war an ocean away, restaurants have become something of a culinary frontline for Americans to channel support for Kyiv by queuing for a seat and a pastry — while hoping to inflict a bit of pain on Moscow, if only by proxy.
Sisters Anastasiia and Vira Derun, who own D Light Cafe and Bakery in the Adams Morgan neighborhood, are from Bila Tserkva, a city south of Kyiv that has found itself on the direct path of cruise missiles launched at the capital from the Black Sea.
The pair are wracked with fear for their family. And now, they are grappling with non-stop throngs of customers at their door.

"We don't really sleep at night because we always keep checking (the news) but then we have to be here early morning," Anastasiia Derun told AFP.
During the weekend, dozens of people wait outside the cafe. On weekdays, the pastry case is quickly emptied by a constant stream of customers.
Overwhelmed, Derun stopped giving free Ukrainian flag cookies to people who came in to make donations in hopes it would keep the crowds down — and at one point contemplated halting fundraising for Ukraine altogether.
But after raising $7,500, she couldn't put away the donation box. Instead, she now has three volunteers helping manage the masses and run water to tables.
Abby Wright, a 23-year-old seated outside D Light Cafe over the weekend said she had come with her friends "understanding fully that there's more tangible ways to support Ukraine than just buying coffee."
But the experience, she said, allowed her to have "a little contact with that culture."

A dozen blocks away, at Russia House, a Washington staple for more than two decades, the picture could not be more different.
Owners had been on the verge of reopening after a two-year Covid hiatus when President Vladimir Putin launched his invasion of Ukraine.
The restaurant has since been vandalized twice, in what police characterized as a hate crime, and its owners are contemplating whether to reopen at all given the public's new distaste for all things Russia.
"We were an easy target," said co-owner Aaron McGovern, estimating up to $20,000 in damage.
The destruction included smashed windows, an uprooted stair railing, and signs left behind with messages like "Don't eat at the Putin House."
As he swept up the glass, McGovern says, a passerby shot him the middle finger.
Since the invasion, Ike Gazaryan, owner of Pushkin Russian Restaurant in San Diego, has likewise received multiple threats, including a call from a screaming man "promising to blow something up."
The irony, he said, is that most Russian business owners in the United States are extremely sympathetic to Ukraine, having themselves fled the former Soviet Union or Putin's Russia.
Ethnically Armenian, his family fled Azerbaijan, Uzbekistan and Russia before landing in the United States.
His restaurant serves up food from a variety of former Soviet republics against a backdrop of damask wallpaper and chandeliers. But it has Russia in its name, he said, because "everybody knows where Russia is — so you do this for marketing purposes."
He estimates the now toxic Russian branding is driving clientele down 30 to 40 percent.

At the distinctly Ukrainian restaurant Veselka in Manhattan's East Village, the opposite holds true.
Lines of up to 100 people have wrapped around the eatery and owner Jason Birchard, whose Ukrainian immigrant grandfather was the founder, said business is now "probably double to what I normally do."
In Austin, Texas, restaurateur Varda Monamour, who was born in Crimea before moving to Moscow, simply yanked the word "Russian" off the exterior of her restaurant, formerly known as Russian House.
Where the letters once stood are now ghost markings. Her restaurant will henceforth be called The House.
Its former name "just brings pain to people of Ukraine and others, even Russians," Monamour said.
By Becca MILFELD
© Agence France-Presse

Tweets by @forbesindia
What if markets maximised both efficiency and fairness?
Facebook eases rules to allow violent speech against 'Russian invaders'