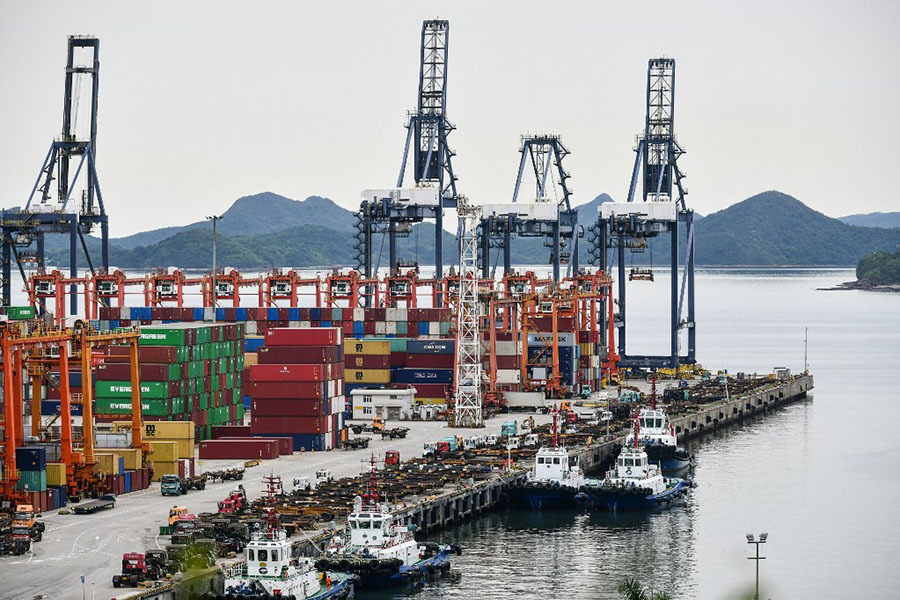 This aerial photo shows a view of Yantian port in Shenzhen in China's southern Guangdong province. Image: AFP / China OUT

China's exports shrank in October, the first such decline since mid-2020, customs authorities said Monday, as a domestic slowdown and the threat of global recession hit international trade.
Exports fell 0.3 percent year-on-year in October, according to the General Administration of Customs, a steep drop from September's 5.7 percent increase and well below analysts' expectations.
Year-on-year imports were down 0.7 percent in October, negative for the first time since March this year and down from September's 0.3 percent growth.
The slowdown in trade comes as global demand for Chinese products weakens with energy prices soaring and the United States facing the threat of recession.

Sporadic Covid-19 lockdowns have also hurt consumer enthusiasm and business confidence in the world's second-largest economy.
Analysts surveyed by Bloomberg forecast export growth of 4.3 percent in October, but expected only 0.1 percent growth in imports amid weakening demand at home.
"The recent decline in export volumes appears to reflect a reversal in the pandemic-era surge in global demand for Chinese goods," Capital Economics analyst Zichun Huang said in a note on Monday.
Import volumes are "likely to continue weakening given the challenging domestic outlook", Huang said.

China's factory activity shrank in October, official data showed last week, which the National Bureau of Statistics blamed on virus outbreaks last month.
Factory activity has been in contraction territory for six months of the year so far, as sweeping Covid restrictions paralysed major industrial cities such as Shanghai, Shenzhen and Chengdu.
Apple on Monday warned of delayed shipments after Covid restrictions "temporarily impacted" production at its massive factory in Zhengzhou, central China.
Chinese leaders have set out an annual economic growth target of about 5.5 percent, but many observers think the country will struggle to hit the target, despite announcing a better-than-expected 3.9 percent expansion in the third quarter.
Also read: China export growth slows sharply in August: official data
It is the last major economy wedded to a strategy of extinguishing Covid outbreaks as they emerge, imposing snap lockdowns, mass testing and lengthy quarantines despite the widespread disruption to businesses and international supply chains.
And authorities poured cold water on speculation that the policy could be relaxed Saturday, with National Health Commission (NHC) spokesperson Mi Feng saying that Beijing would "stick unswervingly to... the overall policy of dynamic zero-Covid".
Authorities had imposed enhanced virus curbs on a total area accounting for more than 10 percent of China's overall gross domestic product as of Thursday, according to Nomura analysts.
By Jing Xuan TENG
© Agence France-Presse​