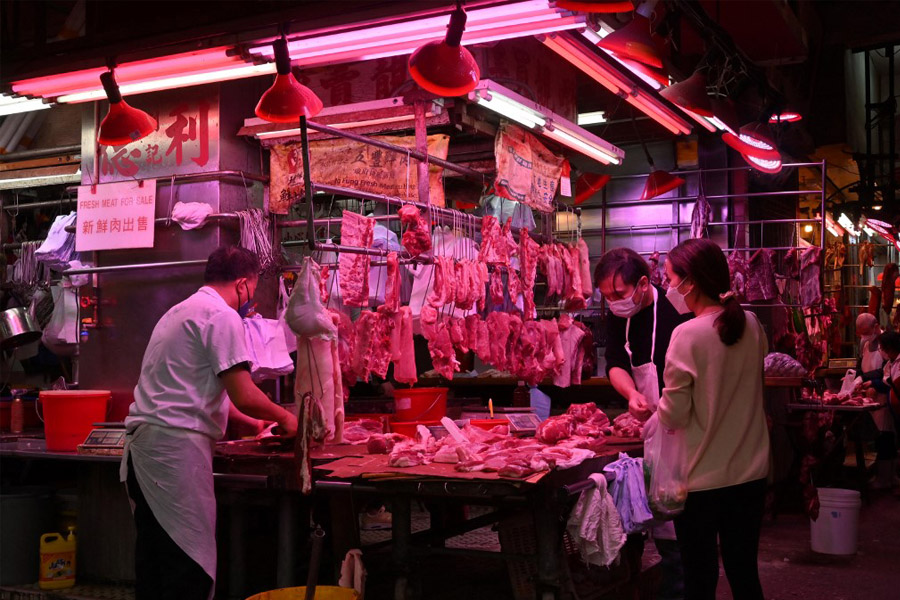 Pork prices in the country have continued to rise since mid-March, despite government intervention, hitting 31.17 yuan ($4.40) a kilo last week. Image: Peter Parks/AFP

China released more pork reserves Friday, state media said, after prices of the staple meat soared by almost a third, triggering inflation concerns.
Beijing's top economic planner has already dipped into the state reserves three times this month and has ordered suppliers to slaughter more pigs in a bid to rein in costs.

But prices have continued to rise and a possible spike in demand over the week-long national day holiday in early October, has forced officials to respond.
"China will release more pork from government reserves to the market on Friday to maintain supply and price stability," official People's Daily reported.
Pork is the most commonly consumed meat in China, with the average person in the country eating more than 25 kilogrammes per year, according to OECD data.
"From September 19-23, the weekly average retail price of lean meat in 36 large and medium-sized cities increased by 30 percent compared with the same period last year," the National Development and Reform Commission said in a statement Tuesday.
Pork prices in the country have continued to rise since mid-March, despite government intervention, hitting 31.17 yuan ($4.40) a kilo last week.
China's consumer inflation reached a two-year high of 2.7 percent in July — largely because of surging pork costs — before cooling slightly to 2.5 percent in August as Covid-related restrictions dampened overall demand, official data showed.
The Chinese government keeps massive stores of frozen pork in warehouses, occasionally releasing reserves to stabilise prices, especially during periods of peak demand including Lunar New Year.
Also read: World economy is slowing more than expected
Beijing's central economic planner pledged more investment in the central pork reserves and to "further increase the distribution if necessary".
"The domestic production capacity of live pigs is generally reasonable and sufficient, and the number of breeding sows, newborn piglets, and fattening pigs are all on the rise," it added.
The world's second-largest economy has mostly been spared the impact of a global surge in food prices caused by Russia's war in Ukraine.
But pork prices were hit hard after the country's herds were devastated by African swine fever in recent years, causing consumer inflation to spike.
In 2019, authorities said they would free up land to restore production to pre-swine fever levels, and officials have since released supplies from stockpiles to rein in costs.