In that case, poorer families will almost certainly bear the brunt again, because low-wage workers are often the first to lose hours and jobs

By Jeanna Smialek and Ben Casselman 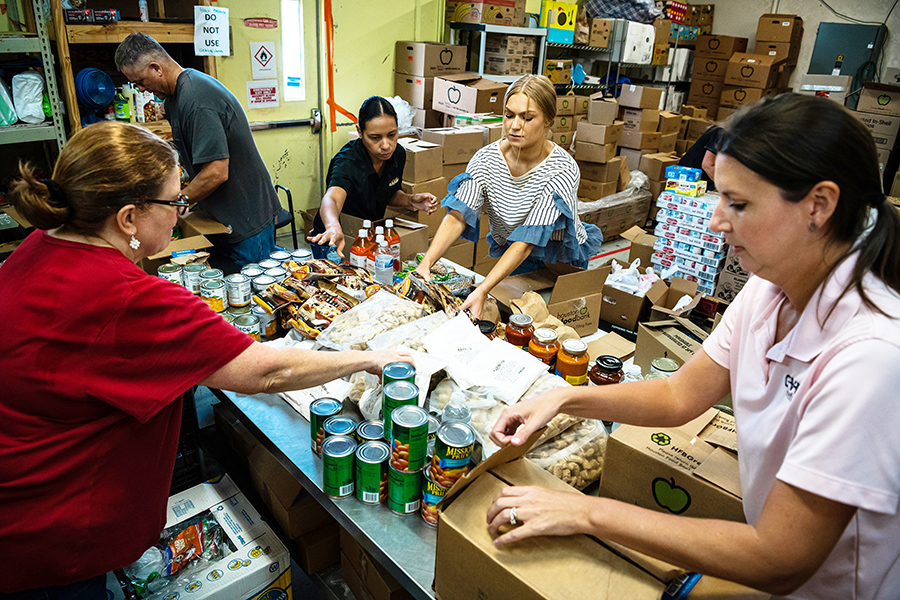 Volunteers organize food donations at a food pantry run by West Houston Assistance Ministries in Houston, Aug. 5, 2022. Many higher income households have been able to keep spending even as costs climb, but data and anecdotes suggest that lower-income households, despite the resilient job market, are struggling more profoundly with inflation. (Meridith Kohut/The New York Times)

For Theresa Clarke, a retiree in New Canaan, Connecticut, the rising cost of living means not buying Goldfish crackers for her disabled daughter because a carton costs $11.99 at her local Stop & Shop. It means showering at the YMCA to save on her hot water bill. And it means watching her bank account dwindle to $50 because, as someone on a fixed income who never made much money to start with, there aren’t many other places she can trim her spending as prices rise.

“There is nothing to cut back on,” she said.

Jordan Trevino, 28, who recently took a better-paying job in advertising in Los Angeles with a $100,000 salary, is economizing in little ways — ordering a cheaper entree when out to dinner, for example. But he is still planning a wedding next year and a honeymoon in Italy.

And David Schoenfeld, who made about $250,000 in retirement income and consulting fees in 2021 and has about $5 million in savings, hasn’t pared back his spending. He just returned from a vacation in Greece, with his daughter and two grandchildren.

“People in our group are not seeing this as a period of sacrifice,” said Schoenfeld, who lives in Sharon, Massachusetts, and is a member of a group called Responsible Wealth, a network of rich people focused on inequality that pushes for higher taxes, among other stances. “We notice it’s expensive, but it’s kind of like: I don’t really care.”

Higher-income households built up savings and wealth during the early stages of the pandemic as they stayed at home and their stocks, houses and other assets rose in value. Between those stockpiles and solid wage growth, many have been able to keep spending even as costs climb. But data and anecdotes suggest that lower-income households, despite the resilient job market, are struggling more profoundly with inflation.

That divergence poses a challenge for the Federal Reserve, which is hoping that higher interest rates will slow consumer spending and ease pressure on prices across the economy. Already, there are signs that poorer families are cutting back. If richer families don’t pull back as much — if they keep going on vacations, dining out and buying new cars and second homes — many prices could keep rising. The Fed might need to raise interest rates even more to bring inflation under control, and that could cause a sharper slowdown.

In that case, poorer families will almost certainly bear the brunt again, because low-wage workers are often the first to lose hours and jobs. The bifurcated economy, and the policy decisions that stem from it, could become a double whammy for them, inflicting higher costs today and unemployment tomorrow.

Also read: America's inflation is at a four-decade high. Here's what you need to know

“That’s the perfect storm, if unemployment increases,” said Mark Brown, CEO of West Houston Assistance Ministries, which provides food, rental assistance and other forms of aid to people in need. “So many folks are so very close to the edge.” 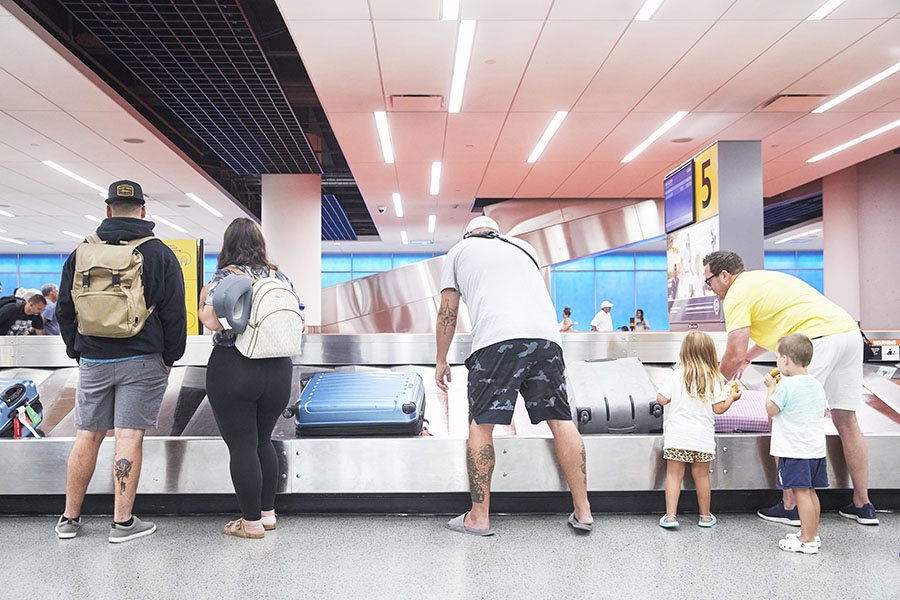 Flyers reclaim their baggage at John F. Kennedy International airport in New York, July 29, 2022. Many higher income households have been able to keep spending even as costs climb, but data and anecdotes suggest that lower-income households, despite the resilient job market, are struggling more profoundly with inflation. (Gus Powell/The New York Times)

America’s poor have spent part of the savings they amassed during coronavirus lockdowns, and their wages are increasingly struggling to keep up with — or falling behind — price increases. Because such a big chunk of their budgets is devoted to food and housing, lower-income families have less room to cut back before they have to stop buying necessities. Some are taking on credit card debt, cutting back on shopping and restaurant meals, putting off replacing their cars or even buying fewer groceries.

But while lower-income families spend more of each dollar they earn, the rich and middle classes have so much more money that they account for a much bigger share of spending in the overall economy: The top two-fifths of the income distribution account for about 60% of spending in the economy, the bottom two-fifths about 22%. That means the rich can continue to fuel the economy even as the poor pull back, a potential difficulty for policymakers.

The Federal Reserve has been lifting interest rates rapidly since March to try to slow consumer spending and raise the cost of borrowing for companies, which will in turn lead to fewer business expansions, less hiring and slower wage growth. The goal is to slow the economy enough to lower inflation but not so much that it causes a painful recession.

But job growth accelerated unexpectedly in July, with wages climbing rapidly. Consumer spending, adjusted for inflation, has cooled, but Americans continue to open their wallets for vacations, restaurant meals and other services. If solid demand and tight labor market conditions continue, they could help to keep inflation rapid and make it more difficult for the Fed to cool the economy without continuing its string of quick rate increases. That could make widespread layoffs more likely.

“The one, singular worry is the jobs market — if demand is constrained to the point that companies have to start laying off workers, that’s what hits Main Street,” said Nela Richardson, chief economist at the job market data provider ADP. “That’s what hits low-income workers.”

Lower-income people are already hurting. Brown’s organization has seen more requests for help in recent months, he said, as local families fall behind on their bills. The size of the typical request has gone up, too, from a few hundred dollars to a few thousand. And he has noticed financial pain creeping up the income spectrum. 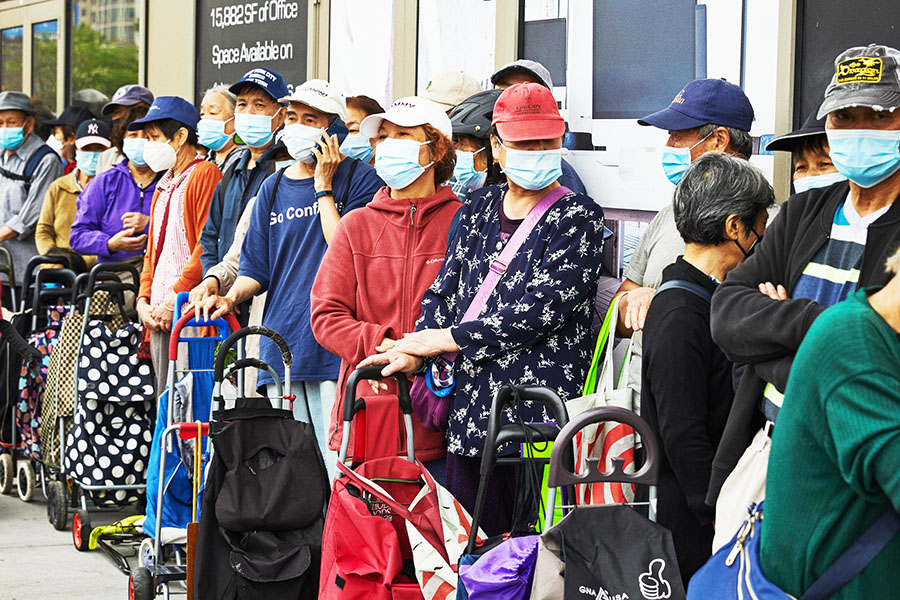 The morning line for a food bank run by the Philadelphia Chinatown Development Corporation, in Philadelphia, May 27, 2022. Many higher income households have been able to keep spending even as costs climb, but data and anecdotes suggest that lower-income households, despite the resilient job market, are struggling more profoundly with inflation. (Aaron Richter/The New York Times)

Brown’s observations are backed up by government data: About 12% of households reported they were struggling to get enough to eat in early July, up from about 10% at the beginning of the year, according to the Census Bureau.

The gaping divide between the rich and poor in this inflationary moment is clear in corporate earnings calls. At Boot Barn, a Western wear retailer, sales of men’s Western boots were down in the first quarter, but sales of higher-priced exotic skin boots picked up. At LVMH, which owns luxury brands like Louis Vuitton and Tiffany, U.S. revenues have been growing strongly, while at Walmart, customers are pulling back as they struggle to afford basic necessities, particularly food, which has run up sharply in price.

“This is affecting customers’ ability to spend on general merchandise categories and requiring more markdowns to move through the inventory, particularly apparel,” Walmart said in its July 25 guidance.

It’s not just apparel: Consumers across the economy are buying less milk and fewer eggs, as prices for those products rise significantly, according to an analysis of government figures by Michelle Meyer, chief U.S. economist for Mastercard. Yet they are also going out to eat at restaurants more often.

Economists have speculated that richer consumers’ resilience could fade as autumn approaches and they take stock of their finances amid a slowing economy. But for now, the reality that America’s wealthier consumers have yet to sharply pull back in the face of rising prices may be setting up a tough road ahead for the nation’s poorer ones.

“We really, in a way, haven’t noticed the inflation very much,” Schoenfeld said. “This economy is very unfair.”

Tweets by @forbesindia
Crypto fundraising hits $30.3 bn in H1, outpacing all of 2021: Report
Nitesh Nandy, co-founder and CTO, on why email still rocks, and plans ahead at Hiver