In a "new-normal" move, India's central bank raises benchmark rate to its highest level since August 2019 while retaining its growth and inflation forecasts for FY23 with a continued focus on calibrated withdrawal of accommodation 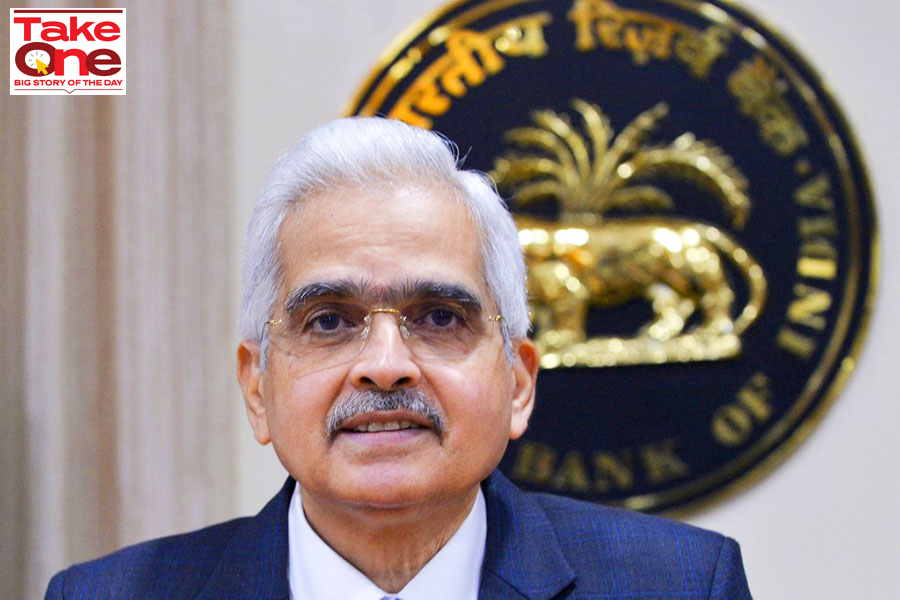 The Reserve Bank of India (RBI) governor Shaktikanta Das answers a question during a press conference at the RBI headquarters in Mumbai on August 5, 2022. - India's central bank on August 5 hiked interest rates for the third time in four months, as Asia's third-largest economy contends with a widening trade deficit and weakening currency. Image: Indranil Mukherjee / AFP

The Reserve Bank’s rate-setting panel unanimously voted to hike the repo rate by 50 basis points to 5.4 percent. After staying at a historic low of 4 percent for over one year, the benchmark rate is now back to pre-pandemic levels, and the highest since August 2019. Five of the six members voted to continue to focus on withdrawal of accommodation to rein in inflation while supporting growth. The central bank retained its GDP and inflation forecast of 7.2 percent and 6.7 percent respectively for the current fiscal year.

“Successive shocks to the global economy are taking their toll in terms of globalised inflationary surges, tightening of financial conditions, sharp appreciation of the US dollar and lower growth across geographies,” RBI Governor Shaktikanta Das explained even as he remained elusive on the neutral interest rate.

On the face of it, inflation has moderated with a downtrend in retail and wholesale price inflation over the past two months. Yet, core inflation (excludes food and fuel) remains sticky at over 6 percent, suggesting that it may be challenging to rein in headline inflation below 6 percent given the volatility in food and fuel supply. Extreme weather conditions and the change in sowing and seasonal patterns due to climate change are making it more difficult to predict food and energy prices and hence accurate inflation forecasts are tough.

Das cautioned that inflationary pressures are likely to remain broad-based and elevated. “Consumer price inflation has eased from its surge in April but remains uncomfortably high and above the upper threshold of the target. The volatility in global financial markets is impinging upon domestic financial markets, including the currency market, thereby leading to imported inflation,” he added.

Economists agree: Inflation in India tends to be sticky and since the pandemic large firms have gained pricing power and may begin to pass on higher input costs to consumers. HSBC India’s chief economist Pranjul Bhandari says the RBI must anchor inflation expectations. “For instance, it may have to experiment with new techniques like raising rates earlier rather than later in the cycle, as a way of keeping inflation expectations anchored without too much cumulative tightening,” she notes.

Besides, multi-decade high inflation levels in developed economies coupled with steep rate hikes by central banks are stoking fears of a global recession. This has contributed to the fall in commodity prices which has eased the import bill for India, but also heightens the likelihood of a fall in demand from other countries for India’s exports.

Economists expect India’s balance of payments to slip into deficit this year. This will weaken the Indian rupee further, which recently hit a fresh low of beyond 80 against the greenback. RBI intervention has cushioned the impact, but the central bank’s forex reserves have plummeted to a 20-month low of over $572 billion.

In a situation wherein the balance of payments is in deficit and the US dollar continues to climb against the Indian rupee, the RBI estimates that CPI inflation could potentially rise by 20 basis points for every 5 percent INR depreciation.

The RBI MPC’s strict mandate is to control inflation within 2 to 6 percent. However, for the past many months inflation has been outside this band. Until April, RBI Governor Shaktikanta Das had been clear on the central bank’s motive to support durable recovery in the economy. Over the past couple of months, growth has admittedly taken a backseat as the MPC scurries to douse the flames of raging inflation. In its previous meeting in June, the RBI had cut its GDP estimate and raised its inflation projection for FY23, but it has retained these growth and inflation forecasts in the August policy (see side table).

But Sampath Reddy, CIO, Bajaj Allianz Life Insurance, sees downward risks to growth. “The RBI mentioned that the domestic economic activity is showing signs of broadening with improving credit growth, pick-up in investment activity and rising capacity utilisation. However, risks like geo-political concerns and global financial market volatility and tightening financial conditions will weigh heavily on the outlook,” he says.

Likewise, in its July bulletin, the Reserve Bank of India suggested that inflation may be peaking, and will align with the tolerance band of 2 to 6 percent by the fourth quarter of the current fiscal year. That’s the central bank’s baseline scenario. On a more optimistic note, the RBI doesn’t rule out the possibility that the “easing of inflation could be even sooner and faster”. The key is the direction of change in inflation—not its level—in these extraordinary times, it said. 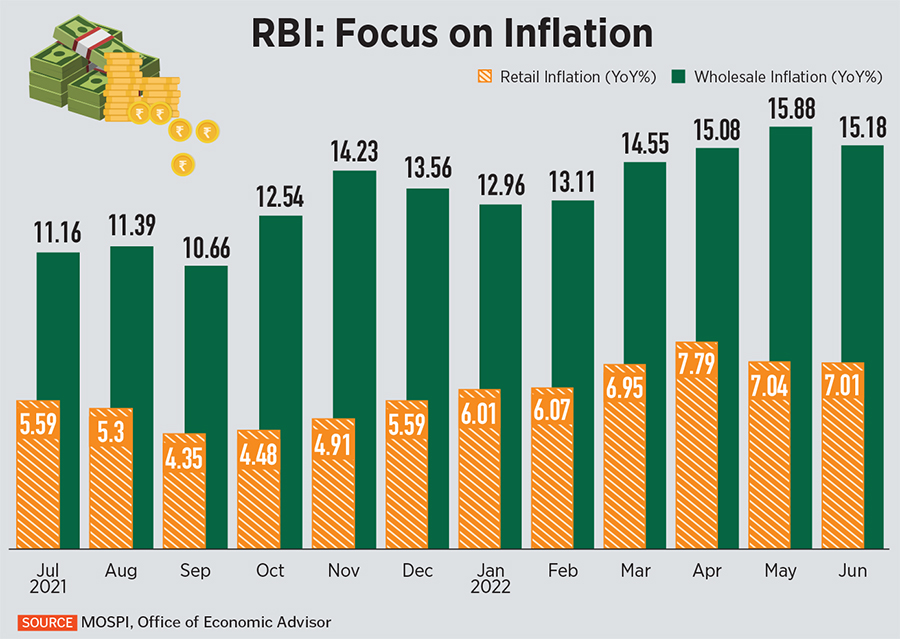 Yet economists believe that inflationary risks cannot be downplayed at this juncture. Clearly, the central bank is focusing on steps to rein in inflation, despite the month-on-month decline in CPI and WPI inflation prints (see above table) and a 20-40 percent decrease in global commodity prices. In fact, the recent cool-off in input prices can help the RBI pull inflation down to 6 percent levels by March next year, if it continues to tighten rates. 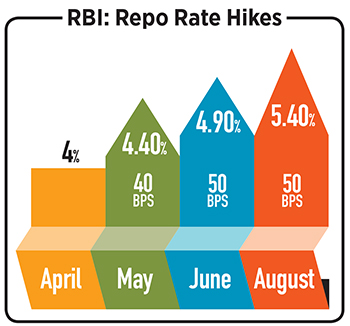 After watching inflation surge from the sidelines—much like most global central banks—RBI has sprung into action to increase rates and tame rampant inflation. Over two tightening moves in May and June, the Reserve Bank of India had raised the benchmark rate by a cumulative 90 basis points to 4.9 percent.

Madhavi Arora, lead economist at Emkay Global, says, “We think we are near-peak RBI-hawkishness, led by falling risk premia of the entire commodity price complex and incremental rate hikes will be lower.”