Indian exports: Brace for a slowdown 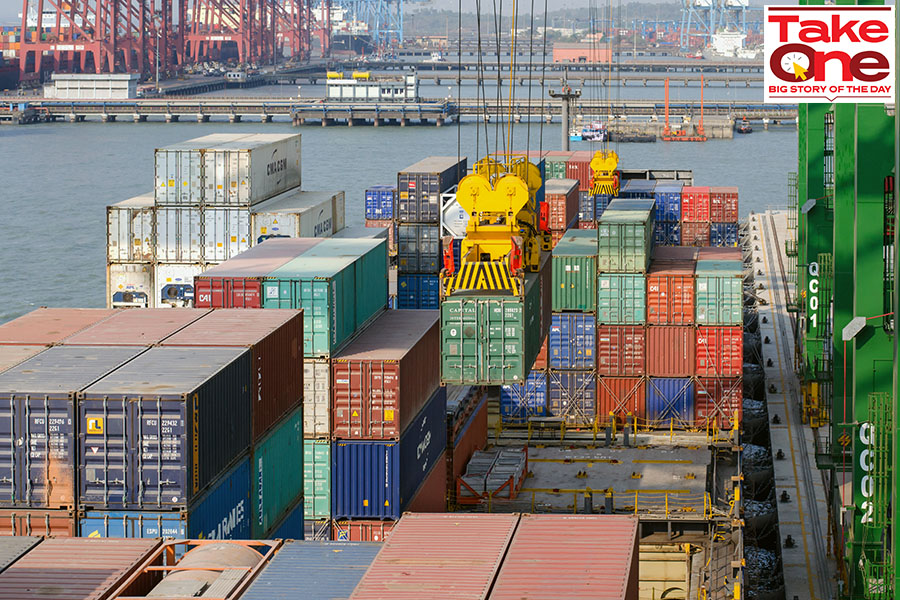 Starting in March, month-on-month numbers started slowing from their peak of $42.2 billion. It is now clear that exporters are facing hurdles on account of the slowdown in the developed world Image: SHutterstock

As India’s trading partners opened up for business, the country’s merchandise exports recovered rapidly in 2021. But as tightening monetary policies aim to slow Western economies, India’s exports have begun to feel the heat.

In the year ended March 2021, India saw a total of $291 billion of merchandise exports. This increased to $419 billion in March 2022, with engineering goods and petroleum products accounting for much of the gains. Gems and jewellery, chemical products and textiles are other significant contributors. (More recently electronic goods have also picked up but from a low base.)

But starting in March, month-on-month numbers started slowing from their peak of $42.2 billion. It is now clear that exporters are facing hurdles on account of the slowdown in the developed world. Adapting to changing demand as well as coping with a depreciating currency will be their key challenges. In some areas in India, most notably specialty chemicals, there has been a push from manufacturers to replace capacity in China. In others, like electronics manufacturing and textiles, government, production-linked policies aim to boost export numbers. 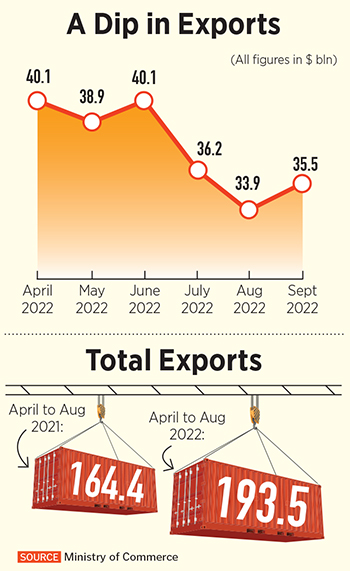 The most prominent slowdown has come from engineering goods that include products such as auto components, cars, machinery and steel. This has seen the biggest slowdown in August 2022, declining from $9.6 billion to $8.2 billion. Engineering goods fell from 28.8 percent of total exports in August 2021 to 24 percent in August 2022. Part of the fall could be on account of falling raw material prices for metals that are immediately passed on to buyers. But sales of finished goods like two-wheelers are also down. Bajaj Auto saw a 33 percent export decline in the month of September.

“With the high probability of recession in the West, the market for legacy products for auto component companies could be under threat,” says Harshbeena Zaveri, vice chairman and managing director of NRB Bearings. She points out that those that adapt to newer technologies in the hybrid and e-mobility space should fare well as accelerating demand quickens new platform launches. 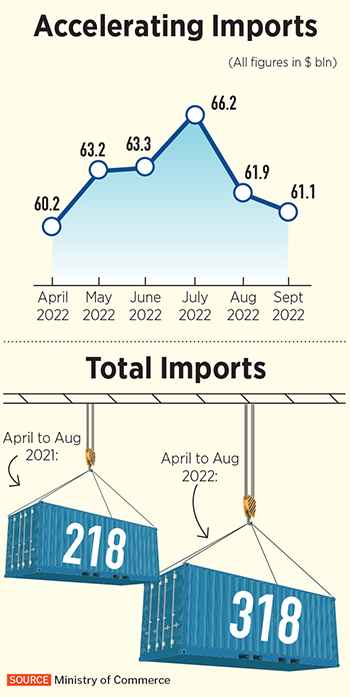 At the same time, an uptick in oil prices has put pressure on India’s current account. So far this fiscal year at $318 billion imports are up 45 percent from the same period last year. As oil prices hover at $90 a barrel, India’s oil import bill stood at $92.6 a barrel in October, according to the Petroleum Planning and Analysis Cell. Petroleum products made up 28 percent of imports in August 2022, up from 20.8 percent in August 2021. A depreciating rupee also pushed up the cost of petroleum products for Indian consumers.

Going forward, Indian exporters will have to brace themselves for soft demand for their products. Orders usually come in with a two-quarter lag and the true picture will only be known once the festive season is over in the West. Suvodeep Rakshit, senior economist at Kotak Institutional Equities, points out instances in the past when slowing economies saw an instantaneous policy reaction from central banks in the form of lower rates; that is unlikely to happen this time. Falling commodity prices on account of a recession is probably the only boon that India can count on.