Inflation has been relentlessly rapid for a year and a half now. The longer that remains the case, the greater the risk that it is going to become a permanent feature of the economy. But the aggressiveness of the monetary policy action now underway also pushes central banks into new and risky territory 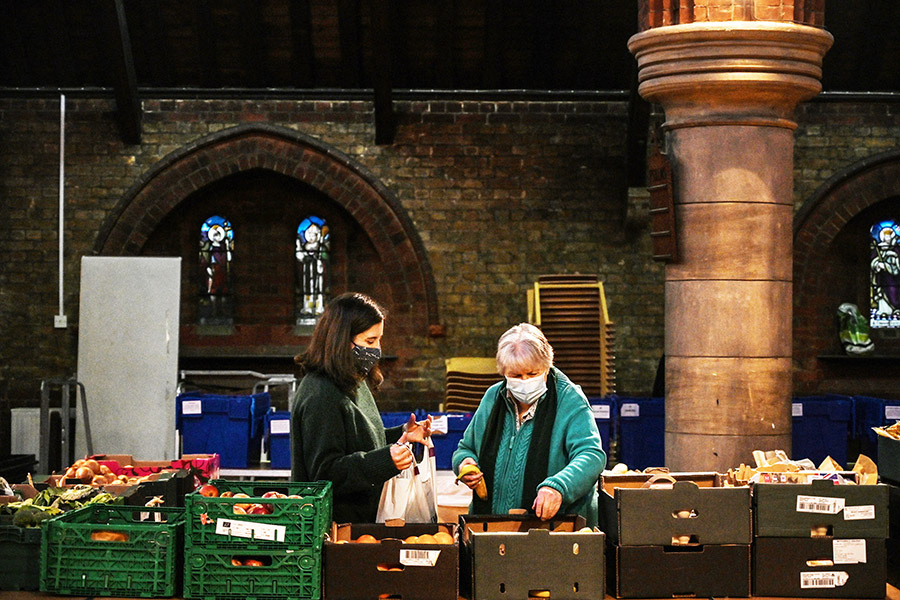 Volunteers at a food bank in London, Jan. 27, 2022. The Bank of England on Thursday, Sept. 21, 2022, raised interest rates by half a point to 2.25 percent, even as it said that the United Kingdom might already be in a recession. (Mary Turner/The New York Times)

A day after the Federal Reserve lifted interest rates sharply and signaled more to come, central banks across Asia and Europe followed suit on Thursday, waging their own campaigns to crush an outbreak of inflation that is bedeviling consumers and worrying policymakers around the globe.

Central bankers typically move slowly. That’s because their policy tools are blunt and work with a lag. The interest rate increases taking place from Washington to Jakarta, Indonesia, will need months to filter out across the global economy and take full effect. Jerome Powell, the Fed chair, once likened policymaking to walking through a furnished room with the lights off: You go slowly to avoid a painful outcome.

Yet officials, learning from a history that has illustrated the perils of taking too long to stamp out price increases, have decided that they no longer have the luxury of patience.

Inflation has been relentlessly rapid for a year and a half now. The longer that remains the case, the greater the risk that it is going to become a permanent feature of the economy. Employment contracts might begin to factor in cost-of-living increases, companies might begin to routinely raise prices and inflation might become part of the fabric of society. Many economists think that happened in the 1970s, when the Fed tolerated out-of-control price increases for years — allowing an “inflationary psychology” to take hold that later proved excruciating to crush.

But the aggressiveness of the monetary policy action now underway also pushes central banks into new and risky territory. Some economists warn that by tightening quickly and simultaneously when growth in China and Europe is already slowing and supply chain pressures are easing, global central banks risk overdoing it. They may plunge economies into recessions that are deeper than necessary to curb inflation, sending unemployment significantly higher.

“The margin of error now is very thin,” said Robin Brooks, chief economist at the Institute of International Finance. “A lot of this comes down to judgment, and how much emphasis to put on the 1970s scenario.”

In the 1970s, Fed policymakers did lift interest rates in a bid to control inflation, but they backed off when the economy began to slow. That allowed inflation to remain elevated for years, and when oil prices spiked in 1979, it reached untenable levels. The Fed, under Paul Volcker, ultimately raised rates to nearly 20% — and sent unemployment soaring to more than 10% — in an effort to wrestle the price increases down.

“We think that a failure to restore price stability would mean far greater pain later on,” Powell said at his news conference Wednesday, after the Fed raised rates by three-quarters of a percentage point for a third straight time. The Fed expects to raise borrowing costs to 4.4% next year in the fastest tightening campaign since the 1980s.

The Bank of England raised interest rates half a point to 2.25% on Thursday, even as it said the United Kingdom might already be in a recession. The European Central Bank is similarly expected to continue raising rates at its meeting in October to combat high inflation, even as Russia’s war in Ukraine throws Europe’s economy into turmoil.

Also read: Is the stage set for a 50 bps rate hike next week?

As the major monetary authorities lift borrowing costs, their trading partners are following suit, in some cases to avoid big moves in their currencies that could push up local import prices or cause financial instability. On Thursday, Indonesia, Taiwan, the Philippines, South Africa and Norway lifted rates, and a large move by Switzerland’s central bank ended the era of below-zero interest rates in Europe. Japan has comparatively low inflation and is keeping rates low, but it intervened in currency markets for the first time in 24 years on Thursday to prop up the yen in light of all of the action by its counterparts.

The wave of central bank action is expected to have consequences, working by design to sharply slow both interconnected commerce and national economies. The Fed, for instance, sees its moves pushing U.S. unemployment to 4.4% in 2023, up from the current 3.7%.

Already, the moves are beginning to have an impact. Climbing interest rates are making it more expensive to borrow money to buy a car or a house in many nations. Mortgage rates in the United States are back above 6% for the first time since 2008, and the housing market is cooling down. Markets have swooned this year in response to the tough talk coming from central banks, reducing the amount of capital available to big companies and cutting into household wealth.

Yet the full effect could take months or even years to be felt.

Rates are rising from low levels, and the latest moves have not yet had time to fully play out. In continental Europe and Britain, the war in Ukraine rather than monetary tightening is pushing economies toward recession. And in the United States, where the fallout from the war is far less severe, hiring and the job market remain strong, at least for now. Consumer spending, while slowing, is not plummeting.

That is why the Fed believes it has more work to do to slow the economy — even if that increases the risk of a downturn.

“We have always understood that restoring price stability while achieving a relatively modest increase in unemployment, and a soft landing, would be very challenging,” Powell said Wednesday. “No one knows whether this process will lead to a recession, or if so, how significant that recession would be.”

Maurice Obstfeld, an economist at the Peterson Institute for International Economics and a former chief economist of the International Monetary Fund, wrote in a recent analysis that there is a risk that global central banks are not paying enough attention to one another.

“Central banks clearly are scrambling to raise interest rates as inflation runs at levels not seen for nearly two generations,” he wrote. “But there can be too much of a good thing. Now is the time for monetary policymakers to put their heads up and look around.”

Still, at many central banks around the world — and clearly at Powell’s Fed — policymakers are treating it as their duty to remain resolute in the fight against price increases. And that is translating into forceful action now, regardless of the imminent and uncertain costs.

Powell may have once warned that moving quickly in a dark room could end painfully. But now, it’s as if the room is on fire: The threat of a stubbed toe still exists, but moving slowly and cautiously risks even greater peril.

Tweets by @forbesindia
Société Générale join hands with Arquant Capital to offer custodial services
Startup Fridays S3 Ep7: 'If you are among the top growth drivers in any company, why not build your own' — Ajeet Singh