Is the stage set for a 50 bps rate hike next week?

The Monetary Policy Committee is likely to hike the benchmark rate by 35-50 basis points as it fights multiple challenges of escalating geopolitical tension in Ukraine, a hawkish US Fed, plunging rupee, mixed growth signals, and rising food inflation 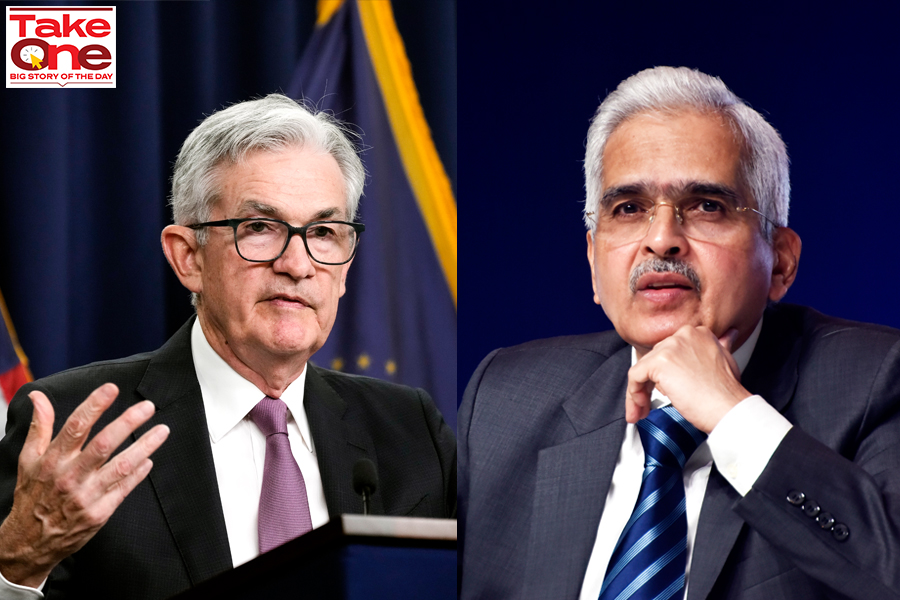 The Reserve Bank of India’s (RBI) six-member rate setting panel will meet next week to frame the bi-monthly monetary policy. In its meeting in August, inflation seemed to be on a downward trajectory and growth prospects appeared rosy. This time around, higher food prices pose a big concern, and several ratings agencies have slashed India’s growth outlook for the current fiscal.

On the global front, the situation in Ukraine may worsen with Russia announcing partial military mobilisation for its citizens, stoking growth challenges and uncertainty. Most importantly, a relentless US Federal Reserve—that is determined to stamp out historically high inflation with a series of steep rate hikes—may roil market sentiments.

On Wednesday, the US Federal Reserve announced a third consecutive rate hike of 75 basis points and projected interest rates to rise to 4.6 percent in 2023. “We want to act aggressively now, and get this job done, and keep at it until it’s done,” Fed Reserve Chairman Jerome Powell said. “We have to get inflation behind us. I wish there was a painless way to do that (but) there isn’t.”

This, of course, has worldwide ripple effects for markets and economies. This will weigh on the Monetary Policy Committee (MPC) members’ agenda when it meets on September 28. “With this level of hawkishness from the US Fed, it would be extremely difficult for the RBI to soften its tone on the domestic monetary policy anytime soon. India doesn't have that much of an inflation problem, but our external balances are not in the best shape. RBI's foreign exchange reserves are also dwindling at a very fast pace,” says Pankaj Pathak, fund manager-fixed income, Quantum AMC.

Mint Street traders felt the pinch hours after markets opened and the rupee sunk to a lifetime low of 80.61 against the greenback, marking the likelihood of the rupee plunging towards 81 in the coming days. Much like the Asian peers, India’s equity markets felt the jitters too. At 12:25 pm, the S&P BSE Sensex was trading in the red, down by about 540 points at 58,928. 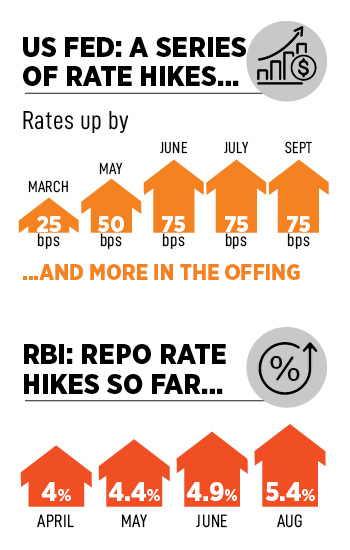 “The US central bank struck a more hawkish tone than expected at its latest meeting, indicating that it will aggressively front load rate hikes to rein in runaway inflation, even at the risk of hurting growth. Slowing portfolio flows in the domestic markets have further accentuated the decline witnessed in the rupee-dollar exchange rate, even as weakening crude oil prices are still capping losses in the domestic currency,” says Sugandha Sachdeva, vice president- commodity and currency research at Religare Broking.

Dalal Street is rife with expectations of a rate hike of 35 to 50 basis points on September 30 as the central bank has clearly communicated its intent to rein in inflation within its target range of 2 to 6 percent. “We expect a 35 basis points hike in September and 25 basis points in December for a 6 percent terminal rate,” says Nomura’s chief India economist Sonal Varma.

Suvodeep Rakshit, senior economist at Kotak Institutional Equities, expects the MPC to continue with calibrated repo rate hikes, with a 35 basis points hike in the September policy along with a shift in the operating target from Standing Deposit Facility to repo rate by end-FY23.

The steep pace of rate hikes by global central banks is the new normal. Since May, the RBI has hiked rates by 1.4 percent to 5.4 percent. In its August policy, the MPC had unanimously voted to hike rates by 50 basis points, focus on withdrawal of accommodation to curb inflation, and retain its GDP and inflation forecast of 7.2 percent and 6.7 percent respectively for FY23.

Also read: Asia: Looking the US recession in the eye?

After a marginal month-on-month decline in June and July, retail inflation rose to 7 percent in August from 6.7 percent in the previous month. The uneven distribution of rainfall has led to higher food prices. Economists expect the price of rice to further increase in the coming months, though the restriction on rice exports coupled with buffer stocks may cushion the impact to some extent. 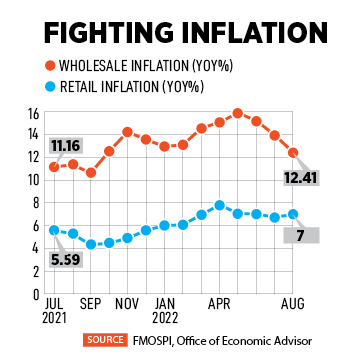 “We expect the next inflation print for September to remain elevated around the current levels before moderating meaningfully from October onwards. Grain supply is a new concern for food inflation, and we are monitoring the domestic food grain situation closely,” says Tanvee Gupta Jain, India Economist, UBS.

Also read: RBI turns hawkish to sail ahead of the 'storm'

While inflation is worrisome, the growth outlook isn’t robust yet. Growth headwinds include spillover effects from a global slowdown, fading pent-up demand, and financial tightening. On a year-over-year (y-o-y) basis, IIP growth declined to 2.4 percent in July from 12.7 percent in June. The domestic economy grew by 13.5 percent y-o-y in the April-June quarter versus the RBI’s forecast of 16.2 percent.

“Sticky inflation and weakening growth increase the policy dilemma, but we expect inflation to remain a top priority for now, given policy rates are still below neutral,” adds Varma.

Brokerage firm Nomura expects GDP growth to slide to 4.7 percent next year from 7.2 percent in the current calendar year. In fact, economists do not rule out a downward revision in RBI’s FY23 GDP growth estimate to 7 percent from 7.2 percent earlier in the September policy.

India recorded a GDP growth of 13.5 percent in the second quarter versus 4.1 percent in the previous quarter. This is the fastest pace of growth over the past four quarters and was largely driven by pent-up demand in the services sector following the reopening of the economy. But economists caution of a slowdown in the coming months because while economic activity picked up in Q2, the growth momentum cooled in July and may not be sustainable given the global macroeconomic challenges and Russia’s increasingly aggressive military stance in Ukraine.

“We conclude that it points to a K-shaped recovery, with the vulnerable and unorganised labour-intensive sectors primarily lagging, reflecting deeper, scarring effects and lower post-pandemic trend growth,” notes Varma.