Plans by Liz Truss, Britain's new prime minister, to cut taxes and freeze energy bills landed like a bomb in a niche corner of financial markets, hitting U.K government bond prices so hard that the Bank of England was compelled to intervene 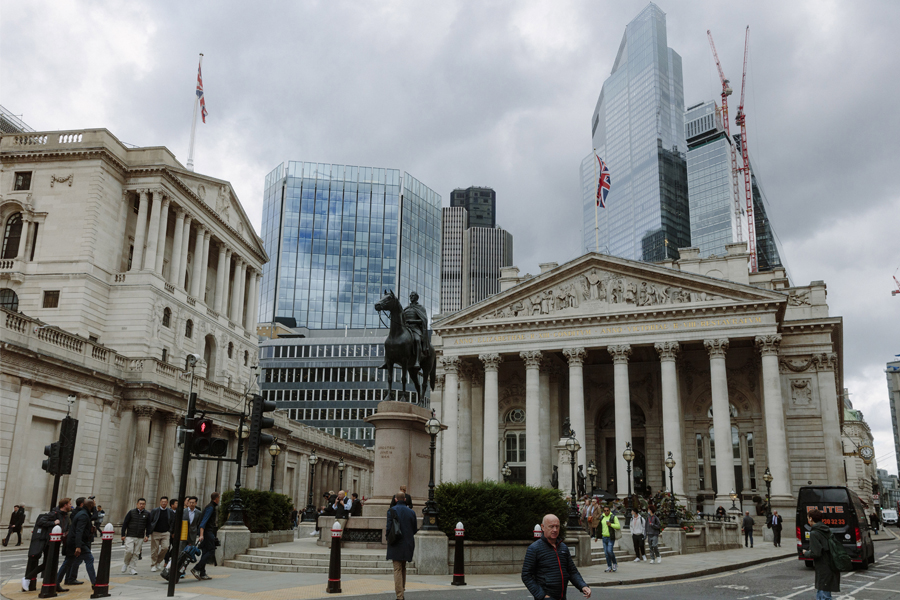 The Royal Exchange, a center of commerce, in London, Sept. 28, 2022. Plans by Britain’s Prime Minister Liz Truss to cut taxes and freeze energy bills caused upheavals among complex financial instruments that pension funds use to minimize the impact of interest rate changes, leading to a bond market rout that prompted the Bank of England to intervene. (Alex Ingram/The New York Times)

Plans by Liz Truss, Britain’s new prime minister, to cut taxes and freeze energy bills landed like a bomb in a niche corner of financial markets, hitting U.K government bond prices so hard that the Bank of England was compelled to intervene, and highlighting how obscure derivatives can still shake up the global financial system more than a decade after the 2008 financial crisis.

On Wednesday alone, 30-year British government bonds swung more in a day than they had in a full year for the past five years: the biggest one-day move on record. In currency markets, the pound slumped to its lowest level on record against the U.S. dollar, coming close to parity, with moves of a magnitude comparable to the onset of the coronavirus pandemic.

“It is the most extreme market event that I have been involved in,” said Simon Bentley, head of U.K. client portfolio management at asset manager Columbia Threadneedle, who started working in finance just before the dot-com bubble burst in 2000.

It all started last Friday, when Kwasi Kwarteng, the chancellor of the Exchequer, announced Britain’s biggest tax cuts since the 1970s, predominantly for high earners. The package also included a new cap on energy prices to help households facing a winter fuel crisis. Investors had been bracing for the moves, but the announcement was unexpectedly thin on details about how the government would finance its plan. Fears that the government would have to increase its borrowing pushed down the price on its existing debt, and sank the value of the pound.

Prices move inversely to bond yields. Within 30 minutes of the British government’s announcement, the yield on 30-year government bonds, also known as gilts, soared, moving more than it typically does in a full day. The market reaction ricocheted around the world. U.S. government bond yields also rose and stocks fell.

As turmoil increased, it exposed vulnerabilities in the financial system. Although investors initially sold off bonds because of the uncertainty, those moves caused upheavals among pension plans, amplifying the sell-off like a pileup.

The pension fund business is seen as a stolid part of the financial world. But because these funds manage so much money, their distress can affect wider markets. In particular, it was the $1.5 trillion defined-benefit pension plan industry that came into focus this week. These pensions, popular in the United Kingdom, pay a fixed sum, linked to inflation, to retirees in the future.

Over the long term, interest rate swings can change the picture for pension funds. When interest rates rise, bond prices fall and pensions’ liabilities — essentially the money they owe retirees in the future — decrease in value. But when rates drop, the opposite happens, so the funds have to generate more cash going forward to cover their liabilities.

To guard against that risk, pension funds have increasingly turned to what’s called a liability-driven investment strategy, a way of using derivatives and other products linked to gilts that hedge against a drop in interest rates.

Derivatives work by tying their value to that of an underlying asset, in this case gilts. And they are cheaper to purchase than the underlying bonds, so pensions can own more of them. That’s what the U.K. pension funds did, building large positions that also made them more sensitive to changes in bond yields.

Last Friday, after the U.K. government announced its plan to cut taxes, yields on gilts shot up as prices fell. The asset managers that oversee the holdings of pension funds began asking them for more cash to cover the change in value. By the end of Monday, the yield on 30-year gilts had risen another 0.5 percentage points — a huge move for an asset that usually moves in the low hundredths of a percentage point. Asset managers began to press pension funds to post collateral so that they could cover the losses on the derivative contracts.

The moves were so sharp that Bentley of Columbia Threadneedle, one of the largest asset managers that facilitates these trades for pension funds, said he alerted the Bank of England.

“We wanted to make sure it was crystal clear what we were seeing in markets,” he said.

But pension funds, especially smaller ones, don’t always move quickly. It can take them a couple of weeks to sell assets — including stocks, corporate and government bonds — to raise the money for collateral.

“Managers were asking for more collateral but they couldn’t wait two weeks,” said Dan Mikulskis, a partner at LCP, which advises pension funds. “They wanted it in two days, or even sooner. That puts a lot of strain on the system.”

Then on Tuesday, asset managers still waiting for collateral and running out of time began to close out their trades, putting further pressure on the market because exiting such trades replicates the effect of selling more gilts, amplifying the sell-off.

Columbia Threadneedle said it had to unwind a “small amount” of trades when clients were unable to come up with the cash needed to cover losses. BlackRock, another large asset manager for these pension funds, sent a memo to its clients Wednesday morning, saying that for funds close to seeing their assets exhausted, they would close out the trades.

Mercer, another asset manager, said it had locked three funds, preventing pension investors from adding to or withdrawing their investments. Mercer cited “the sudden deterioration of market conditions” and the ensuing volatility in the gilt market for its move.

“That is what led to concern from folks like ourselves,” said David Fogarty, a director at Dalriada Trustees, which operates pension funds on behalf of its members. “If a position is closed out, we no longer have the protection” from a fall in bond yields.

Asset managers pleaded with the Bank of England to intervene. By 11 a.m. Wednesday, they got their wish.

The central bank pledged to buy government bonds at a rate of up to $5 billion a day for the next 13 weekdays, in an attempt to restore proper market functioning. The decision scuttled plans to sell bonds that the bank had previously purchased as part of pandemic-era support for financial markets. It didn’t take long for the markets to return to normal. The yield on the 30-year gilt fell more than a percentage point on Wednesday.

As markets calmed, pension funds began to assess the damage.

While the scale of the fallout is still being calculated, the dramatic rise in yields initially benefited pensions because it reduced the value of their future liabilities. But the moves were so sharp and fast that pension funds didn’t have time to adjust and post more collateral on their derivatives positions, according to industry players.

“Until the dust settles and the LDI managers start to disclose all the activities taken on behalf of their clients, it will not be quite clear what the impacts have been at a plan level,” Fogarty said.

Tweets by @forbesindia
Photo of the day: Offer prayers, seek selfies
Cred, upGrad, Groww are the top three startups in India in 2022: LinkedIn