The drills — China's largest-ever around Taiwan — are a major show of strength after US House Speaker Nancy Pelosi infuriated Beijing by visiting the island, and are likely to disrupt one of the world's busiest shipping zones 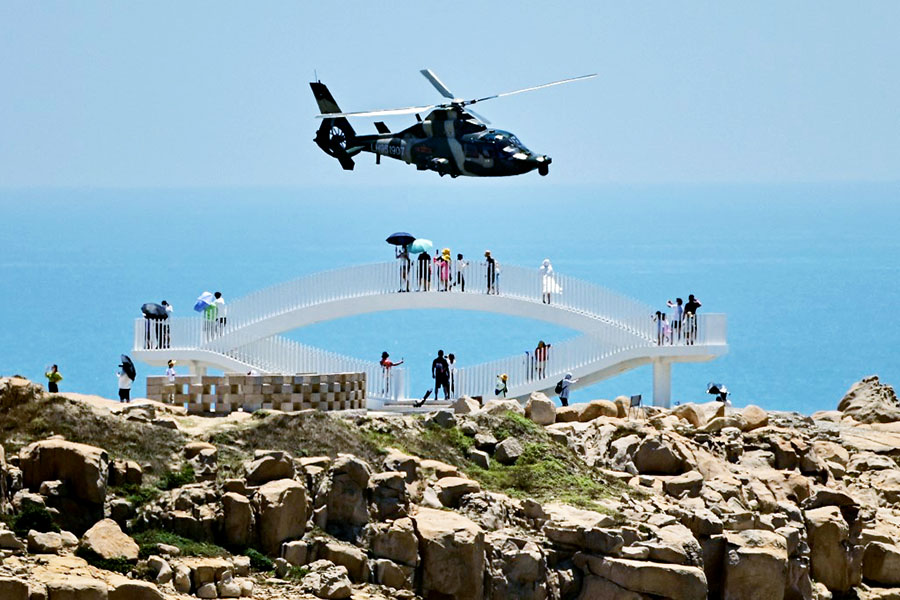 The drills — China's largest-ever around Taiwan — are a major show of strength after US House Speaker Nancy Pelosi infuriated Beijing by visiting the island.
The manoeuvres kicked off Thursday and will take place along some of the busiest shipping routes on the planet, used to supply vital semiconductors and electronic equipment produced in East Asian factory hubs to global markets.
The routes are also a key artery for natural gas.
Read more: Liquefied natural gas comes to Europe's rescue. But for how long?
Nearly half the world's container ships passed through the narrow Taiwan Strait — which separates the island from the Chinese mainland — in the first seven months of this year, according to data compiled by Bloomberg.
"Given that much of the world's container fleet passes through that waterway, there will inevitably be disruptions to global supply chains due to the rerouting," said James Char, an associate research fellow at Singapore's S. Rajaratnam School of International Studies.

Even a small disruption in global supply chains, already battered by the Covid-19 pandemic and Russia's invasion of Ukraine, could prove costly.
"China's planned live-fire exercises are occurring in an incredibly busy waterway," Nick Marro, the Economist Intelligence Unit's lead analyst for global trade, wrote in a note. "The shutting down of these transport routes — even temporarily — has consequences not only for Taiwan, but also trade flows tied to Japan and South Korea."
Read more: Europe waits to see if Russia restarts gas shipments through key pipeline
The uncertainty dragged the Taiwan Taiex Shipping and Transportation Index, which tracks major shipping and airline stocks, down 1.05 percent on Thursday.
The index was down 4.6 percent since the beginning of the week.
Taiwan's Maritime and Port Bureau has warned ships in northern, eastern and southern areas to avoid the areas being used for the drills.
But several shipping companies contacted by AFP said they were waiting to see the impact of the drills before rerouting.
The ongoing typhoon season made it riskier to divert ships around the eastern coast of Taiwan through the Philippine Sea, some added.
Others said they would stick to their schedules.
"We don't see any impact during (this) period and we don't have any plan on re-routing our vessels," said Bonnie Huang, a spokesman for Maersk China.
The drills have also hit air routes.
Over the last two days, more than 400 flights were cancelled at major airports in Fujian, the Chinese province closest to Taiwan, signalling that the airspace could be used by the military.
Taiwan's cabinet meanwhile, has said the exercises would disrupt 18 international routes passing through its flight information region (FIR).

During the previous Taiwan Strait Crisis in the 1990s, China conducted military exercises for months, including lobbing missiles into waters off Taiwan and rehearsing amphibious assaults on the island.
"The Chinese undoubtedly wanted to demonstrate resolve in ways that went beyond what they did in 1996," said Bonnie Glaser, director of the Asia programme at the US-based German Marshall Fund think tank.
China's Global Times newspaper said Wednesday the drills were aimed at showing that China's military is "capable of blockading the entire island".
But China's ongoing economic woes mean it is unlikely to risk a major disruption and would limit itself to aggressive posturing, analysts said.
"Closing off traffic through the Strait for any extended period of time will also hurt the Chinese economy," Char said.
"It's not in Beijing's interest to interrupt civilian travel and trade in the region," said Natasha Kassam of the Lowy Institute, an Australian think tank.
The extent to which China will escalate its response to the Pelosi visit — flexing its military muscle, cyber attacks and economic sanctions — remains to be seen.
Given its military advances, "China very likely has the ability to enforce an air and maritime blockade against Taiwan," said Thomas Shugart, an expert at US think tank the Center for a New American Security.
"Whether China will choose to attempt such a blockade... is largely a matter of how much political and economic risk the Chinese Communist Party's leaders are willing to incur."