The suspense is another reminder of the reliance of Germany, and much of Europe, on Russian energy, a relationship that has come to haunt officials who say Moscow is leveraging its oil and gas to influence decision-making 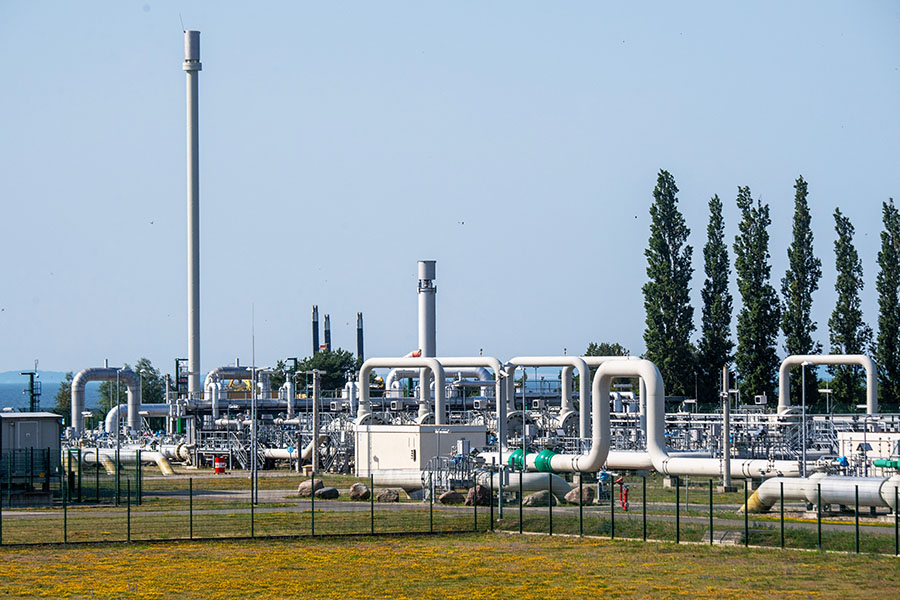 Pipe systems and shut-off devices at the gas receiving station of the Nord Stream 1 Baltic Sea pipeline and the transfer station of the OPAL (Ostsee-Pipeline-Anbindungsleitung - Baltic Sea Pipeline Link) in Mecklenburg-Western Pomerania, Lubmin. At the scheduled end of maintenance work on the Nord Stream 1 gas pipeline, there are indications that gas will start flowing from Russia again on this thursday Image: Stefan Sauer/picture alliance via Getty Images

Europeans awaited news early Thursday about whether Russia’s energy giant, Gazprom, had resumed flows of natural gas through a key pipeline that normally provides more than a third of Germany’s needs as well as essential gas supplies to several of its European partners.

The pipeline, Nord Stream 1, has been offline since July 11 for its previously scheduled annual maintenance. It was to resume operations Thursday, but after weeks of back-and-forth between Russia and Europe, fears among European Union officials were running high that the pipeline would remain out of commission for longer, as punishment for opposition to Moscow’s invasion of Ukraine.

The suspense is another reminder of the reliance of Germany, and much of Europe, on Russian energy, a relationship that has come to haunt officials who say Moscow is leveraging its oil and gas to influence decision-making.

Gazprom reduced flows through the pipeline by 60% starting in mid-June, leading Berlin to declare a “gas crisis” and take steps to encourage conservation of the fuel. The Russians blamed the dialed-down output on the absence of a turbine from one of six compressors that maintain the pressure needed to send the gas along the pipeline’s 1,222 kilometers or 760 miles.

The turbine had been sent for refurbishment to Canada, where it was made by a company now owned by the German firm Siemens Energy. But Canadian sanctions aimed at punishing Russia for its invasion of Ukraine prevented its return.

This month, after lobbying by the German government, Canadian officials agreed to grant a “time-limited and revocable permit” for Siemens Energy to allow the turbine’s return to Germany; from there, officials in Berlin said it would be sent along to Russia.

European Union leaders have said they predict Russia will not restart gas flows. “We have to prepare for a potential full disruption of Russian gas, and this is a likely scenario,” Ursula von der Leyen, the European Commission president, said Wednesday.

But this week Russia gave the strongest signal yet that it would resume gas flows after the maintenance period, albeit in limited quantities. Speaking to reporters late Tuesday in Tehran after meeting with the leaders of Iran and Turkey, President Vladimir Putin of Russia warned that there were more turbines in need of repair, and that with others being taken offline, Gazprom would send only “half of the volume intended” through the Nord Stream pipeline.

German and European officials have dismissed Gazprom’s argument that the crimped flows are linked to the turbine, charging the Russian side with seeking to harm Western economies by cutting access to natural gas. The price of natural gas in Europe has more than quadrupled compared with the same time last year.

Europe must drastically cut its use of natural gas immediately — by a total of 15% between now and the springtime — to prevent a major crisis as Russia slashes gas exports, the European Union’s executive branch said Wednesday, calling for hard sacrifices by the people of the world’s richest group of nations.

“Russia is blackmailing us,” von der Leyen said as she introduced the EU plan to reduce gas consumption. “Russia is using energy as a weapon.”

Maintaining a reduced flow of natural gas could be advantageous to the Russian leader, analysts said, allowing him to keep Europeans in a protracted state of uncertainty and near panic. Russia has already ceased gas deliveries through other major pipelines to Europe that cross Poland and Ukraine.

But other analysts read the tug of war over the turbines as an attempt on Russia’s part to ensure the maintenance of the pipeline, despite the sanctions.

“I think all this turbines saga means that Russia is actually trying to safeguard its flows to Europe, not to undermine them, as it is trying to establish a sanctions-proof repair and maintenance routine,” said Katja Yafimava, a senior research fellow with the Oxford Institute for Energy Studies.