The city government ordered one of its districts to test all 3.5 million of its residents for coronavirus in the coming days, a move that may be a prelude to a larger lockdown in China's capital city 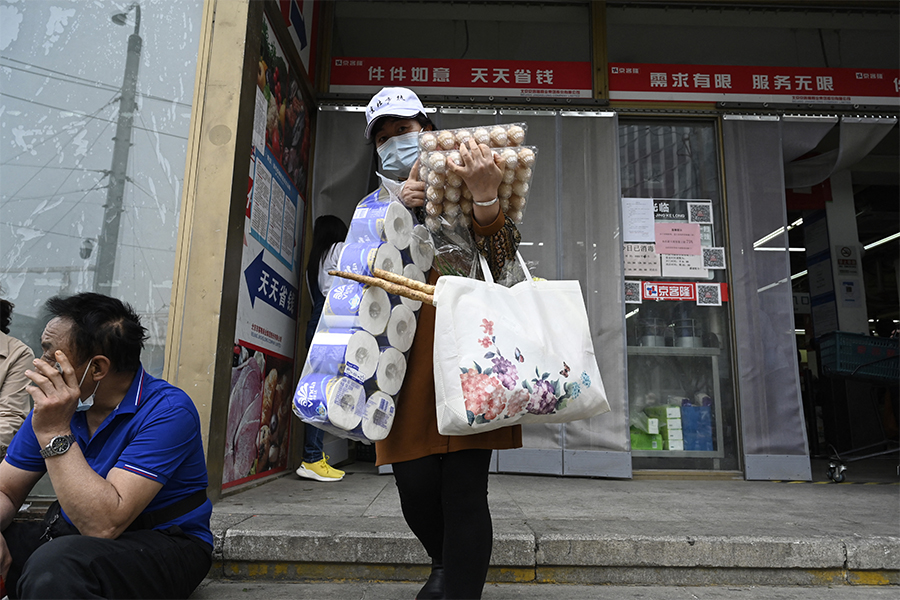 The prospect of further lockdowns in China prompted a fresh wave of economic anxiety Monday as investors and companies whose supply chains run through China contemplated the effect of 70 new virus cases that the Beijing government said it had detected over the weekend.
The city government ordered one of its districts to test all 3.5 million of its residents for coronavirus in the coming days, a move that may be a prelude to a larger lockdown in China’s capital city. Shanghai, a major port and business center, has been locked down for roughly a month, part of China’s “zero COVID” strategy. Other Chinese cities both large and small have announced their own restrictions on the movement of residents in a bid to keep the virus from spreading.
The lockdowns present yet another challenge for global supply chains that have been stressed by pandemic shutdowns and the war in Ukraine, leading to greater competition for goods and higher prices that are fueling inflation worldwide.
While Chinese authorities have sought to keep factories and especially ports operating by keeping workers on the premises in so-called closed loop systems, the lockdowns have interrupted shipments and lengthened delivery times for many of the global companies that depend on Chinese factories.
Phil Levy, chief economist at Flexport, a freight forwarder, said in an email that although Beijing is an important city, “it is not at the heart of factory production or supply chain operations.” He said lockdowns there would have a more limited effect than previous restrictions in Shanghai and Guangdong, where ports continued to mostly operate.
But the effects would depend on where outbreaks occurred — for example, whether they shut down a port — and how long lockdowns persisted, Levy said. “This is a relatively slow part of the year, but there is plenty of catch-up to be done, and things will soon be due to build. The costs will mount the longer this lasts.”
The disruptions that are still unfolding in Shanghai and other Chinese cities are likely to reverberate along global supply chains in the coming months.
Andrea Huang, a senior director at Overhaul, which monitors company supply chains, said with lockdowns not expected to ease until early or mid-May, the ripple effects for industries such as auto and consumer electronics would extend into June or July.
In Shanghai, local authorities Friday selected some companies in the automotive, semiconductor and other key industries to restart production, but the vast majority of enterprises remain shuttered.
Activity at the port has also slowed.
According to data from Project44, a logistics platform, the number of vessels that were berthing at the Shanghai port last week had dropped by about half since the lockdown began, while the number of vessels seeking to call at the nearby port of Ningbo jumped as shipping companies tried to get around restrictions. The time that imported containers were spending in the port had also risen sharply, from 4.6 days on March 28 to 14 days on April 23, the company said, as coronavirus testing requirements for truck drivers limited the ability to get containers in and out of the port.
Fears of broader lockdowns weighed on global stocks Monday, whil

Tweets by @forbesindia
Nearly 15,000 Russian troops have died since the start of the war
Twitter future direction 'uncertain' Parag Agrawal says as employees look for answers