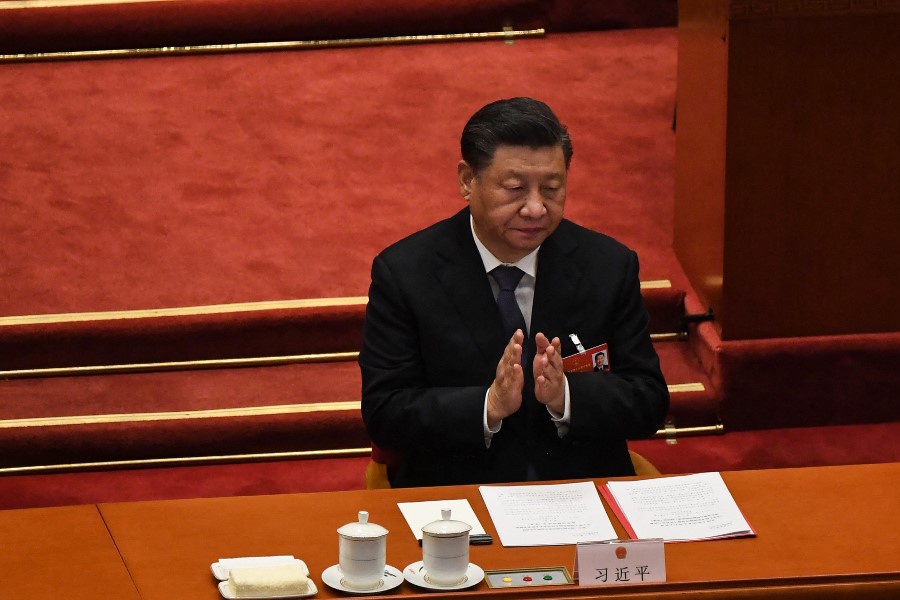 China's President Xi Jinping applauds during the closing session of the National Peopleís Congress (NPC) at the Great Hall of the People in Beijing on March 11, 2022. Image: Leo RAMIREZ / AFP

The government action has pummelled some of China's biggest tech firms, wiping out hundreds of billions of dollars in market value since last year.

But with the Chinese economy hammered by Covid lockdowns, the government has rolled out a series of support measures, including a call for "predictable" tech regulation.

"Regarding large payment and fintech platform enterprises, Xi called for efforts to improve regulations, strengthen institutional weak links, ensure the security of payment and financial infrastructure, and guard against and defuse potential systemic financial risks," according to a readout of the Wednesday meeting by the official Xinhua news agency.

The officials at the meeting discussed promoting the "healthy development" of fintech companies, it added, and said "China will tighten oversight" of financial holding firms and internet financial services.

Investors have been heartened in recent weeks by similar statements by the Chinese government, with some perceiving them as signals that the tech crackdown is finally easing.

Hopes also soared this month when dozens of new video games were approved, and tech stocks rose on reports that authorities were wrapping up a cybersecurity probe into ride-hailing giant Didi.

But regulators this month denied reports that they were discussing the potential revival of Ant Group's scuppered IPO, which would have been the world's largest public offering at the time.

Ant Group -- the payments affiliate of e-commerce giant Alibaba -- had its share offering cancelled at the last minute in 2020.

Alibaba was later hit with a $2.75 billion fine over alleged unfair practices.

Ant Group is set to apply for a financial licence as soon as this month, Bloomberg News reported Wednesday, citing unnamed people familiar with the matter.

Tweets by @forbesindia
At least 1,000 dead in Afghanistan earthquake, with fear toll will rise
Google agrees to pay for beefed-up Wikipedia service