The moves in diverse industries follow earlier announcements by Disney, Ford, Mastercard and others, and highlight the rising economic toll on Russia after its assault on Ukraine unleashed massive sanctions across Western governments 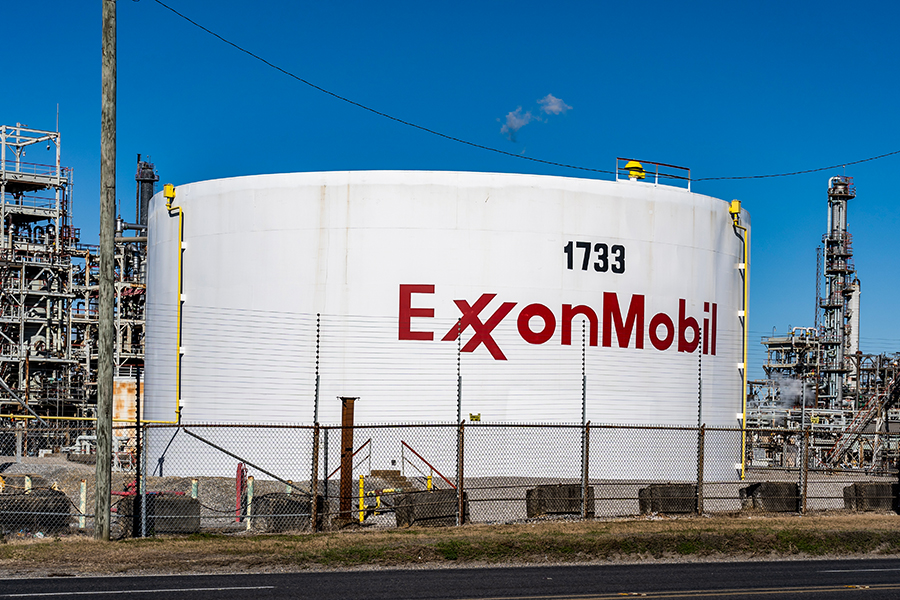 ExxonMobil Baton Rouge Refinery facility in Baton Rouge, Louisiana, USA. ExxonMobil will begin a phased withdrawal from the giant Sakhalin offshore oilfield that it has operated since 1995, saying "we deplore Russia's military action that violates the territorial integrity of Ukraine and endangers its people." (Photo by: JHVEPhoto/Shutterstock)

New York, United States: Apple, ExxonMobil and Boeing announced Tuesday in rapid succession steps to withdraw or freeze business in Russia as more US corporate giants take action after the Ukraine invasion.
The moves — in diverse industries and following earlier announcements by Disney, Ford, Mastercard and others — highlight the rising economic toll on Russia after its assault on Ukraine unleashed massive sanctions across Western governments.
US credit card giants Visa, Mastercard and American Express said they were blocking Russian banks from their payment networks following international sanctions in response to Moscow's invasion of Ukraine.
ExxonMobil will begin a phased withdrawal from the giant Sakhalin offshore oilfield that it has operated since 1995, saying "we deplore Russia's military action that violates the territorial integrity of Ukraine and endangers its people."

The US company operates in Russia on behalf of a consortium including Russian, Indian and Japanese companies, its only major project in Russia, after it pulled out of two joint ventures during the previous round of sanctions against Russia following its annexation of Crimea in 2014.
ExxonMobil's move follows earlier decisions by British energy group BP and Shell to pull out of joint projects in Russia. France's TotalEnergies said it would stay in Russia, but refrain from investing more money there.
ExxonMobil stressed that "the process to discontinue operations will need to be carefully managed and closely coordinated with the co-venturers in order to ensure it is executed safely."

Focus on security of staff

Earlier, Apple said it would halt all product sales in Russia and limit the use of Apple Pay and other services in the country.
"We are deeply concerned about the Russian invasion of Ukraine and stand with all of the people who are suffering as a result of the violence," Apple said.
Ukraine's defiant government, which has urged its people to battle Russian forces, has asked for help from all quarters, including Apple's CEO Tim Cook.
"I appeal to you... to stop supplying Apple services and products to the Russian Federation, including blocking access to the Apple Store!" Ukraine's digital minister Mykhailo Fedorov wrote in a letter he posted to Twitter Friday.
Boeing for its part said it was suspending its support for Russian airlines and its operations in Moscow, saying it was "focused on ensuring the safety of our teammates in the region."
The action could weigh heavily on flag carrier Aeroflot, which flies the Boeing 737 and 777, and last week announced it was suspending flights to Europe in response to the flight ban.
The United States and European allies have put tough sanctions on Moscow in recent days, including by cutting selected Russian banks from the SWIFT messaging system, while Washington has announced measures specifically targeting the country's central bank.
There has also been a stampede of large US companies in recent days away from Russia affecting nearly every sector.
Disney and WarnerMedia were among the entertainment giants to suspend new film releases in Russia, while tech heavyweights such as Facebook, TikTok and Microsoft moved to curb the reach of Russian state-linked news outlets, which stand accused of pushing misinformation about Moscow's invasion of Ukraine.
General Motors suspended vehicle exports to Russia, while Detroit rival Ford aid it was suspending its remaining operations in Russia, including commercial van manufacturing.
Credit card companies including Visa, Mastercard and American Express announced they were blocking Russian banks from their payment networks following international sanctions.
On Tuesday, Moscow announced plans for presidential decree aimed at preventing foreign investment exiting the country.
"In the current sanctions situation, foreign investors will be guided not by economic factors, but by political pressure," Prime Minister Mikhail Mishustin said.
"To enable businesses to make informed decisions, a draft presidential decree has been prepared to introduce temporary restrictions on exiting Russian assets."
He added: "We still consider foreign business as potential partners."
© Agence France-Presse