Putin ordered Sunday Russia's nuclear forces onto high alert in response to what he called "unfriendly" steps by the West. Russia has the world's largest arsenal of nuclear weapons and a huge cache of ballistic missiles 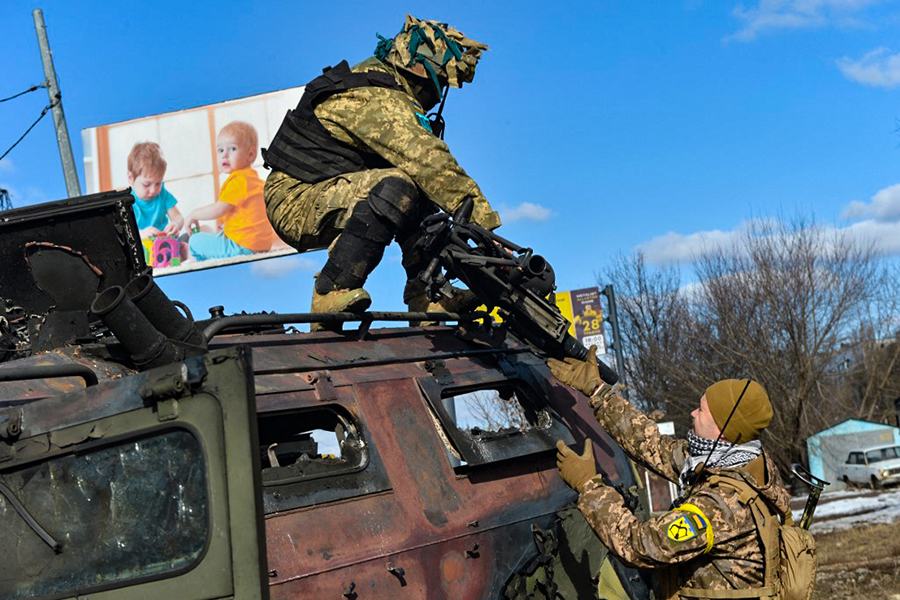 Russian President Vladimir Putin's announcement that his nuclear forces were on alert sparked outcry in the West as the invading troops faced stiff resistance on Monday.
The UN General Assembly will hold a rare emergency session Monday to discuss the conflict, which has claimed dozens of lives and raised fears that it will displace millions of people.
Ukraine has also said it had agreed to send a delegation to meet Russian representatives on the border with Belarus, which would be the two sides' first public contact since war erupted.
Russia invaded on Thursday and quickly announced it had neutralised key Ukrainian military facilities, but fierce fighting has since raged.

Ukraine forces, backed by Western arms, are stymieing the advance of Russian troops, according to the United States, which has led Western condemnation and a campaign of sanctions.
Putin ordered Sunday Russia's nuclear forces onto high alert in response to what he called "unfriendly" steps by the West. Russia has the world's largest arsenal of nuclear weapons and a huge cache of ballistic missiles.
The United States, the world's second largest nuclear power, slammed Putin's order as "totally unacceptable".
Germany said Putin's nuclear order was because his offensive had "halted" and was not going to plan.
Ahead of the planned talks with Russia and as Ukrainian forces defended key cities, Foreign Minister Dmytro Kuleba voiced defiance.
"We will not capitulate, we will not give up a single inch of our territory," Kuleba said.
Ukrainian President Volodymyr Zelensky said he was sceptical about the talks.
"As always: I do not really believe in the outcome of this meeting, but let them try," he said.

On day four of an invasion that stunned the world, Ukrainian forces said Sunday they had defeated a Russian incursion into Ukraine's second city Kharkiv, 500 kilometres (310 miles) east of Kyiv.
A regional official, Oleg Sinegubov, said Kharkiv had been brought under Ukrainian control and the army was expelling Russian forces.
Moscow has made better progress in the south, however, and said it was besieging the cities of Kherson and Berdyansk.
Both are located close to the Crimean peninsula, which Russia annexed from Ukraine in 2014, and from which it launched one of several invasion forces.
Ukrainian officials said they were fighting off Russian forces in several other areas, and claimed that 4,300 Russian troops had been killed.
The Ukrainian army said Monday morning that Russian forces had "several times" attempted to storm the outskirts of Kiev overnight, but all attacks were repelled.
"The situation in the capital of our homeland is under control," said the army on Facebook.
Local media reported strong explosion heard throughout Sunday night in both Kyiv and Kharkiv.
Presidential advisor Oleksiy Arestovich said on Telegram early Monday the capital had been targeted overnight by three Russian missile strikes, one of which was intercepted.
The southern city of Berdiansk is now occupied by Russian soldiers, he added.
Western sources said the intensity of the resistance had apparently caught Moscow by surprise.
Ukraine has reported 352 civilian deaths, including 14 children, since the invasion began.
Russia has acknowledged that a number of its forces had been killed or injured.
The United Nations has put the civilian toll at 64 while the EU said more than seven million people could be displaced by the conflict.
"We are witnessing what could become the largest humanitarian crisis on our European continent in many, many years," the EU commissioner for crisis management Janez Lenarcic said.
Ukraine has called on its own civilians to fight Russia, with a brewery in Lviv in the country's west switching its production line from beers to bombs, making Molotov cocktails for the volunteer fighters.
At the Medyka border crossing with Poland, volunteer Jasinska said the long line of arrivals, mostly women and children, need warm clothes.
Crossing Medyka with his family, Ajmal Rahmani, an Afghan who fled Afghanistan for Ukraine four months before the US withdrawal, told AFP: "I run from one war, come to another country and another war starts. Very bad luck".

The United States and its allies continued to try and build economic and military pressure.
The White House said it would hold a secure call with allies and partners Monday to discuss "developments" in Russia's attack on Ukraine and "coordinate our united response".
The United States and Europe "need to really stand together... to both the aggressive actions of Russia against Ukraine but also the threatening rhetoric coming from Moscow," said NATO chief Jens Stoltenberg.
NATO will deploy its rapid response force for the first time to bolster its eastern flank.
EU member states also closed their airspace to Russian planes and many pledged arms for Ukraine — but stressed they would not themselves intervene militarily.
Brussels announced it would provide 450 million euros ($500 million) for Ukraine to buy weapons and ban Russian central bank transactions, as well as restricting two Moscow-run media outlets.
The West said it would remove some Russian banks from the SWIFT bank messaging system, and freeze central bank assets.
The Kremlin has brushed off sanctions, including those targeting Putin personally, as a sign of Western impotence.
However the European Central Bank warned Monday that the European subsidiary of the Russian state-owned Sberbank was facing bankruptcy.
The Russian ruble fell almost 30 percent on Monday morning.
British energy giant BP announced Sunday it was pulling its 19.75-percent stake in Rosneft, a blow to Russia's key oil and gas sector, which is partly reliant on Western technology.
Also in response to hostilities, FIFA ordered Russia to play its home international fixtures in neutral venues and warned it was considering banning it from the 2022 World Cup.
Oil prices have surged in response to the crisis, with West Texas Intermediate crude up more than six percent and Brent up by more than five in trade Monday.
Putin has said Russia's actions are justified because it is defending Moscow-backed separatists in eastern Ukraine.
The rebels have been fighting Ukrainian government forces for eight years in a conflict that has killed more than 14,000 people.
© Agence France-Presse