Markets around the world have been hammered since the Kremlin recognised two breakaway regions in eastern Ukraine, and the washout is likely to continue as Russia attacks the country 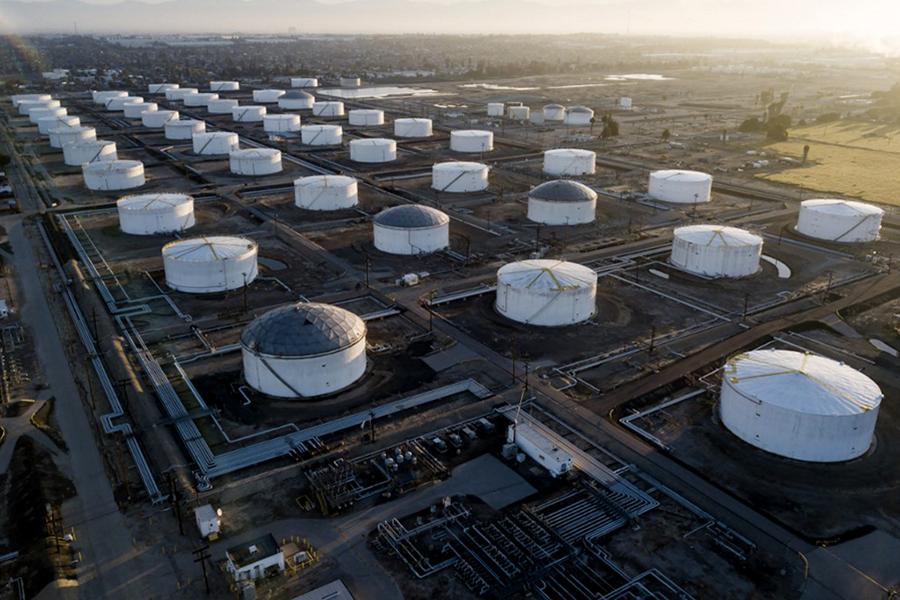 Oil-storage tanks are seen from above in Carson, California. (Photo by Robyn Beck / AFP)​

Hong Kong, China: Oil prices broke past $100 and safe havens surged while equities tumbled Thursday after Russian President Vladimir Putin announced a "military operation" in Ukraine.
Markets have been hammered this week after the Kremlin recognised two breakaway regions in eastern Ukraine and said it would provide "peacekeepers" to the regions, leading to warnings of a conflagration.
The Russian president said in a surprise statement on television: "I have made the decision of a military operation."
He also vowed retaliation against anyone who interfered and called on the Ukraine military to lay down its arms.
There were later reports of explosions in Kyiv as well as the eastern Ukrainian front.
Russia is said to have up to 200,000 soldiers massed on the border with Ukraine, and Washington has warned for weeks that Putin was planning an incursion.

Oil prices rocketed with Brent moving within spitting distance of the $100 not seen since September 2014, while gold and the Japanese yen — safe havens in times of crisis and turmoil — also jumped.
The dollar was up more than six percent against the ruble, which has been battered in recent weeks on worries about the impact of sanctions on the Russian economy.
On equity markets, Hong Kong, Sydney, Mumbai and Seoul all fell more than three percent while Tokyo, Singapore, Taipei and Wellington dropped more than two percent. There were also big losses in Shanghai, Manila, Jakarta and Bangkok.
World leaders had been trying to work for a de-escalation but failed, while Ukrainian President Volodymyr Zelensky said he had tried to call Putin but there was "no answer, only silence".
He added that Russia could start "a major war in Europe" in the coming days.
US President Joe Biden deplored the Russian operation as an "unprovoked and unjustified" attack, adding that it would cause "catastrophic loss of life and human suffering".
Earlier, the United Nations was told a full-scale Russian invasion would have a devastating global impact that would likely spark a new "refugee crisis".
The threat of a conflagration has sent markets spiralling, with traders fretting over supplies of key commodities including wheat and metals.
"Russia/Ukraine tensions bring both a possible demand shock (for Europe), and more importantly a much larger supply shock for the rest of the world given the importance of Russia and Ukraine to energy, hard commodities and soft commodities," said National Australia Bank's Tapas Strickland.
The crisis comes as governments struggle to contain runaway inflation fuelled by demand as life returns after recent Covid-19 lockdowns, with many fearing the fragile global economic recovery from the pandemic could be knocked off course.
After staging a slight bounce Wednesday in reaction to what were considered light sanctions against Moscow, Asian markets were back in the red after a hefty drop on Wall Street.

The stand-off in Europe has provided central banks with a further headache as they move to lift pandemic-era financial support and tighten monetary policy.
Attention is on every utterance from Federal Reserve officials as they prepare to hike interest rates next month, with speculation over how fast and hard it will move.
Commentators said bets are on six increases this year, down from previous forecasts for up to seven, and they said the stakes are rising further.
"Policy mistakes at this point in time are almost guaranteed," Shana Sissel of Banrion Capital Management told Bloomberg Television.
"The question isn't, 'Is there going to be a policy mistake?', but, 'How bad will it be? Will the Fed hike too much too fast, will they front-load everything?'"
And with uncertainty reigning supreme, warnings abound of worse to come, with BNY Mellon Investment Management's Lale Akoner saying: "Expect volatility to really persist in the next few months."
Geopolitical risks were flaring at a "very inopportune time", she added, as traders try to navigate central bank tightening.

Tweets by @forbesindia
Arpit Chug, and the quest to remain razor sharp
'Like a Trump rally': Inside Donald Trump's Truth Social app