Green future is cause for worry in South Africa's coal belt

Coal is a bedrock of South Africa's economy, employing almost 100,000 people and accounting for 80 percent of electricity production. But the sector's future is uncertain, as Africa's most industrialised economy looks to wean itself off the carbon-emitting fuel in line with global efforts to tackle climate change 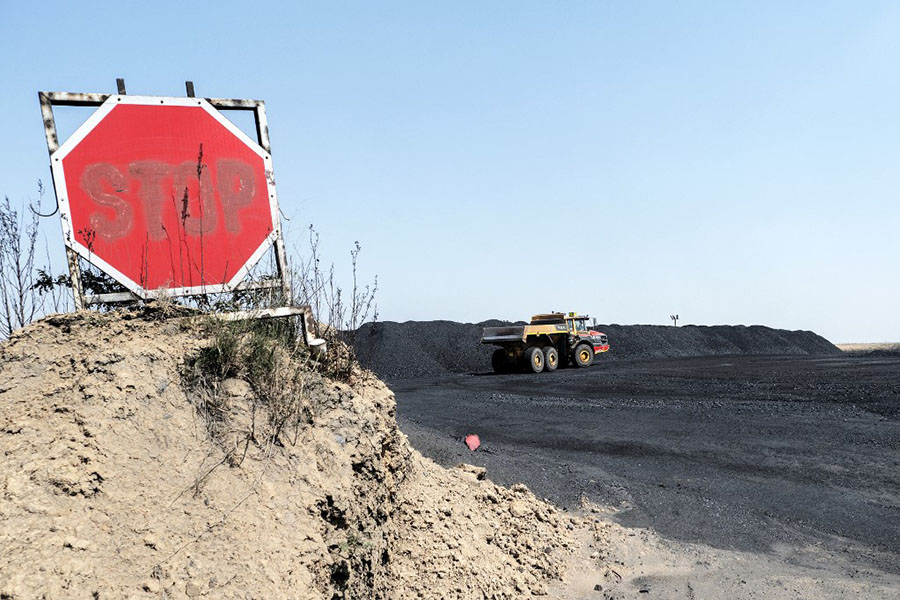 A truck is seen in the Grinding Station of Khutala Colliery in Mpumalanga, on September 29, 2022. An hour's drive from Johannesburg, Khutala Colliery is among more than 100 coal mines and a dozen coal-fired plants that dot the industrial landscape of the northeastern province of Mpumalanga, an area known as South Africa's coal belt. Photo: LUCA SOLA / AFP

Kendal, South Africa: Miner Thokozani Mtshweni, 37, looks spent as he readies for a 12-hour shift huddled under a carport shelter to avoid the scorching sun. He fixes his belt weighed down by an oxygen tank and gas detecting tools.
An hour's drive from Johannesburg, Khutala Colliery is among more than 100 coal mines and a dozen coal-fired plants that dot the industrial landscape of the northeastern province of Mpumalanga, an area known as South Africa's coal belt.
Workers kitted in soiled yellow overalls breathe in the hazy air as they wait to board trucks that will drive them to an underground shaft.
"Closing these mines would affect our lives a lot," Mtshweni tells AFP. "It would be chaos".

Coal is a bedrock of South Africa's economy, employing almost 100,000 people and accounting for 80 percent of electricity production.
But the sector's future is uncertain, as Africa's most industrialised economy looks to wean itself off the carbon-emitting fuel in line with global efforts to tackle climate change.
Last year, the government secured $8.5 billion in loans and grants from a group of rich nations to finance the transition to greener alternatives.
Fraught negotiations around how the money should be spent are expected to end before the COP27 climate summit in Egypt in November.
Supporters hope the money could act as a catalyst to transform the energy landscape in what is one of the world's top 12 largest polluters.
But questions remain over the country's ability to make swift inroads towards its goal of reaching net-zero carbon emissions by 2050.

"Significantly more funding" will be needed, said Daniel Mminele, who heads the finance task team of a climate commission set up by President Cyril Ramaphosa.
A study by South Africa's Stellenbosch University put the figure at $250 billion over the next 30 years.
Recent studies suggest more jobs will be created than lost by going green, but analysts say the swap will not be painless.
The coal industry is concentrated in Mpumalanga, which accounts for about 80 percent of all coal production.
"We need coal," says Isaac Mahumapelo, a Khutala Colliery section manager, as piles of the black stuff are crushed behind him.
"The cities, the towns in and around Mpumalanga have been established through the coal mines."
Trade unions worry job losses will not be reabsorbed by the renewable sector.
Unemployment is above 30 percent nationwide.
"Wind and solar is not engineered in South Africa, it is fabricated elsewhere," says energy analyst Tshepo Kgadima.
Also read: Our climate future is in the hands of a few world leaders
After a decade spent in the pits, Mtshweni, the miner, is among those fearing for their future.
"Everyone is dependent on this coal to provide for their loved ones," he says.
International pressure on South Africa to clean up its act is seen with antipathy by some.
Europe's renewed appetite for coal in the wake of the gas crisis sparked by Russia's invasion of Ukraine is often cited as evidence of double standards.
"Coal will still be around for some time and whilst we wish to collaborate ... Let's have our own agenda that realistically recognises the socio-economic imperatives of South Africa," says Mike Teke, CEO of Khutala Colliery's operator, Seriti.

Yet, things are starting to move.
Khutala Colliery lies near Kendal, an industrial town surrounded by coal silos and plumes of thick smoke.
The mine feeds a nearby power station—one of the world's largest—operated by state energy firm Eskom.
The plant and neighbouring mines are surrounded by maize and livestock farms.
Cattle graze under the grey polluted skies. Lumps of coal sit on the side of the road as trucks come and go.
Still, Seriti recently set up a green energy branch to invest in wind and solar.
"We need to diversify in line with what might be coming," says Teke.
Climate activists have tried to force the government to push the throttle forward by taking it to court.
Also read: The big challenges as nations try to craft a new global climate deal
In a first victory this year, judges ordered authorities to reduce pollution in Mpumalanga—which Greenpeace says has some of the dirtiest air in the world.
As Eskom's ageing plants struggle to produce enough energy to keep the lights on, the government has laid out plans to ramp up renewables.
Acting is a must, says Gaylor Montmasson-Clair, an economist at the Trade & Industrial Policy Strategies, a think tank, warning the cost of sticking to coal will be much higher in the long term.
The European Union is set to introduce a carbon tax on imports—a move that could be followed by other countries, and hit economies like South Africa hard, he warns.
"If we do not decarbonise, job losses will be significant. We'll lose our access to markets and finance," he says.
"Not transitioning is not an option. The consequences will be dire".
By Zama LUTHULI
© Agence France-Presse