More than a third of the global economy is headed for contraction this year or next, and the three biggest economies—the United States, European Union and China—will continue to stall, International Monetary Fund economic counsellor Pierre-Olivier Gourinchas warned in a blog post accompanying the fund's latest World Economic Outlook 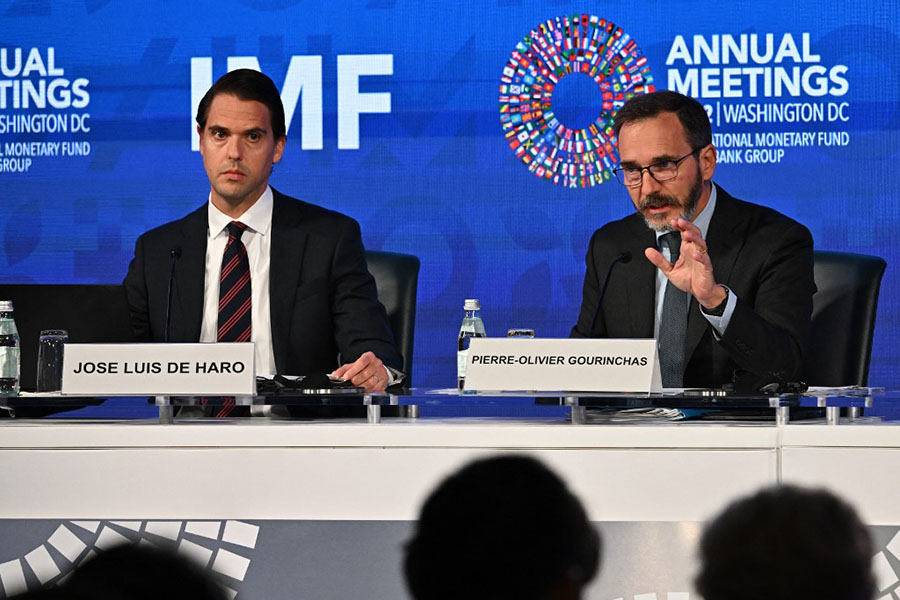 Global growth is expected to slow further next year, the IMF said Tuesday, downgrading its forecasts as countries grapple with the fallout from Russia's invasion of Ukraine, spiraling cost-of-living and economic downturns.
The world economy has been dealt multiple blows, with the war in Ukraine driving up food and energy prices following the coronavirus outbreak, while soaring costs and rising interest rates threaten to reverberate around the globe.
"This year's shocks will re-open economic wounds that were only partially healed post-pandemic," said International Monetary Fund economic counsellor Pierre-Olivier Gourinchas in a blog post accompanying the fund's latest World Economic Outlook.

More than a third of the global economy is headed for contraction this year or next, and the three biggest economies—the United States, European Union and China—will continue to stall, he warned.
"The worst is yet to come and, for many people, 2023 will feel like a recession," said Gourinchas.
In its report, the IMF trimmed its 2023 global GDP growth forecast to 2.7 percent, 0.2 point down from July expectations.
Its world growth forecast for this year remains unchanged at 3.2 percent.
The global growth profile is its weakest since 2001, apart from during the global financial crisis and the worst of the pandemic, the IMF said.
This reflects slowdowns for the biggest economies, including a US GDP contraction in the first half of 2022 and continued lockdowns in China as it faces a property crisis.
The world economy is expected to avert recession, but there is about a one-in-four chance that growth could slow to 2 percent or below, Gourinchas warned Tuesday.
"We've only had that five times since 1970...this is the oil price shock of 1973, the disinflation of 1981, the 2008 financial crisis...these are all big things that have impacted the global economy," he told AFP.

A key factor behind the slowdown is a policy shift as central banks try to bring down soaring inflation, with higher interest rates starting to take the heat out of domestic demand.
Growing price pressures are the most immediate threat to prosperity, said the IMF's report, adding that central banks are now "laser-focused on restoring price stability".
Global inflation is expected to peak at 9.5 percent this year before dropping to 4.1 percent by 2024.
Also read: World economy is slowing more than expected
Misjudging the persistence of inflation could prove detrimental to future macroeconomic stability, Gourinchas warned, "by gravely undermining the hard-won credibility of central banks."
Asked about the Federal Reserve's rate hikes, he told a press briefing on Tuesday that the IMF is not calling for an acceleration, but this "doesn't mean that they should pause on (their) path" either.
This is because banks were starting from a point of historically-low rates as countries emerged from the pandemic.
Current challenges do not mean a large downturn is inevitable, but the fund warned many low-income countries are either in or close to debt distress.
While the G20 has agreed on a "common framework" for debt restructuring for the poorest countries, only three have qualified and "more progress is needed," Gourinchas told reporters.
"Time may soon be running out," he said.

The IMF has also cut forecasts for the world's two biggest economies, the United States and China.
US economic growth for this year is now pegged at 1.6 percent, 0.7 point below the fund's July forecast, due to an "unexpected real GDP contraction in the second quarter," the IMF said.
"Declining real disposable income continues to eat into consumer demand, and higher interest rates are taking an important toll on spending," the report added.
The Fed has been raising interest rates aggressively to tamp down surging inflation, which is slowing economic activity. And the central bank has said more increases are likely to come.
President Joe Biden conceded that a "slight" recession was a possibility.
"I don't think there will be a recession," he told CNN. "If it is, it'll be a very slight recession. That is, we’ll move down slightly."
China's economy is expected to grow at 3.2 percent this year—its lowest rate in decades, apart from the initial coronavirus outbreak.
Also read: World Bank warns recession risk rising amid higher interest rates
The fund cautioned that a worsening of China's property sector slump could spill over to the domestic banking sector and weigh on growth.
A slowdown in the Euro area is also expected to deepen next year, the IMF projected, with the German and Italian economies tumbling into recession due to their exposure to Russian gas cuts.
The energy crisis provoked by Russia's invasion "is not a transitory shock," the IMF said, describing the global shift in energy trade as "broad and permanent."
With the large shock, "there is no recovery in sight in the Russian economy" either, Gourinchas told AFP.
By Beiyi SEOW
© Agence France-Presse​