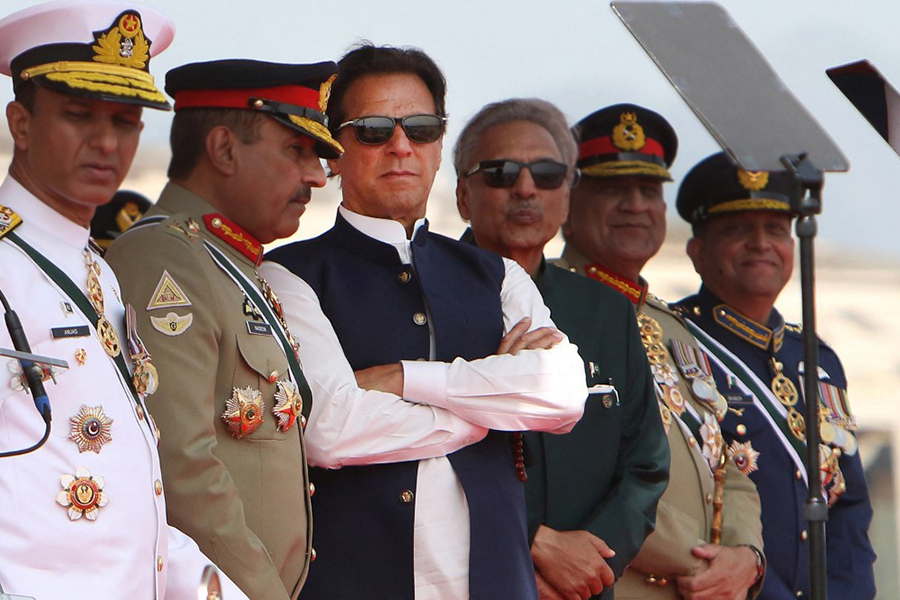 Pakistan Prime Minister Imran Khan faces being booted from office at the weekend after the Supreme Court ruled Thursday that parliament had been illegally dissolved. (Credit: Ghulam Rasool / AFP)

Islamabad, Pakistan: Pakistan Prime Minister Imran Khan faces being booted from office at the weekend after the Supreme Court ruled Thursday that parliament had been illegally dissolved and a no-confidence vote on his government must go ahead.
Khan's coalition lost its majority in the national assembly last week, but he avoided being dismissed when the deputy speaker blocked a no-confidence motion against him and the president dissolved parliament and ordered fresh elections.
"All actions taken are of no legal effect and quashed," the Supreme Court said after hearing four days of argument on the matter.
"The national assembly continues to remain in session," it added, with officials saying it would sit again Saturday.

The court's judgement was broader than expected after the chief justice said earlier this week they would only rule on the legality of the no-confidence motion being blocked.
The decision — which the court said was unanimous — was met with jubilation by opposition supporters in the capital, with packed cars racing through the streets, sounding their horns.
Khan, one of the world's top cricketers before he turned to politics, said he would call a cabinet meeting Friday and address the nation in the evening.
"I have always & will continue to fight for Pak till the last ball," he tweeted.
Shehbaz Sharif, head of the Pakistan Muslim League-N (PML-N) and likely to be the next prime minister, said the court's decision "has saved Pakistan and the constitution of Pakistan".
Pakistan People's Party (PPP) leader Bilawal Zardari Bhutto, who had joined forces with Sharif to oust Khan, tweeted: "Democracy is the best revenge".
Khan claimed the opposition had colluded with the United States for "regime change" when the deputy speaker — a loyalist — refused to allow the no-confidence motion.
Simultaneously, Khan asked the presidency — a largely ceremonial office also held by a loyalist — to dissolve the assembly.

President Arif Alvi has already told the feuding factions to nominate candidates for interim prime minister and asked the country's election commission to fix a date for a new national ballot.
The opposition had refused to cooperate.
There had been high hopes for Khan when he was elected in 2018 on a promise of sweeping away decades of entrenched corruption and cronyism, but he struggled to maintain support with soaring inflation, a feeble rupee and crippling debt.
On Thursday the rupee was trading at a historic low of 190 to the dollar, and the central bank raised the key interest rate by 250 basis points to 12.25 percent — the biggest hike in over a quarter of a century.
Pakistan has been wracked by political crises for much of its 75-year existence, and no prime minister has ever seen out a full term.
Khan has blown anti-US sentiment into the political atmosphere by saying the opposition had colluded with Washington.
The 67-year-old says Western powers wanted him removed because he will not stand with them against Russia and China.
The Supreme Court is ostensibly independent, but rights activists say previous benches have been used by civilian and military administrations to do their bidding throughout Pakistan's history.
Publicly the military appears to be keeping out of the current fray, but there have been four coups since independence in 1947 and the country has spent more than three decades under army rule.
By Nasir JAFFRY
© Agence France-Presse