Palace of Versailles reopens room where French democracy was founded

The room was made in 1686 for Louis XIV to play Jeu de Paume—also known as "real tennis", an early version of the modern game. But more than a century later, it became the unlikely venue for a key moment of the French Revolution 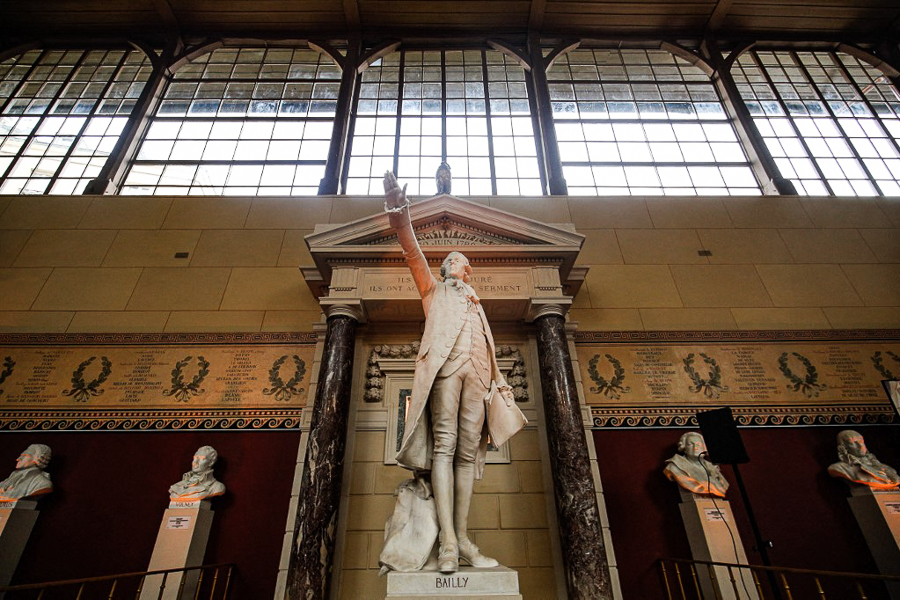 A photograph taken on March 2, 2022 shows the statue ofFrench astronomer, mathematician, freemason, and political leader Jean Sylvain Bailly at the Jeu de Paume hall in Versailles, near Paris. After 8 months of restoration work, the Jeu de Paume room in Versailles, emblematic place of the Revolution in France and symbol of the birth of democracy, is about to reopen its doors to public on April 1, 2022. (Credit: Sameer Al-DOUMY / AFP)

Versailles, France: The Palace of Versailles is reopening the site of on an often-overlooked part of its history on Friday with a fully restored Jeu de Paume Room that hosted the founding of French democracy.The room was made in 1686 for Louis XIV to play Jeu de Paume — also known as "real tennis", an early version of the modern game.
But more than a century later, it became the unlikely venue for a key moment of the French Revolution.
On June 20, 1789, a group of people's representatives, who were demanding reforms from the monarchy, found their entry blocked to the hall of deputies in the palace and looked around for an alternative meeting place.
They ended up signing the "Oath of the Real Tennis Room", vowing to establish a written democratic constitution.

It led to the formation of the National Constituent Assembly, which soon after abolished feudalism and approved the Declaration of the Rights of Man.
The room is reopening on Friday after eight months of work, giving the public "a forgotten part of our history," Catherine Pegard, president of the palace's public administration, told AFP.
It is dominated by a monumental canvas, also restored, which was based on the famous unfinished work by Jacques-Louis David depicting the signing of the oath.
The hall became a storeroom and painters' studio after the revolution, before being restored to its status as a royal playground in the 1840s.
Following yet more political upheaval, it hosted the Museum of the French Revolution from the 1880s before falling back into disrepair for many decades.
The Palace is also reopening rooms used by the royal heirs in the 1700s, fully restored to the original design.
By Sandra BIFFOT-LACUT
© Agence France-Presse