Tiny Bronte book, unseen for a century, goes on sale in New York

Smaller than a playing card, the 15-page manuscript dated 1829 is a collection of ten unpublished poems written by a 13-year-old Charlotte Bronte and was last seen in public in November 1916 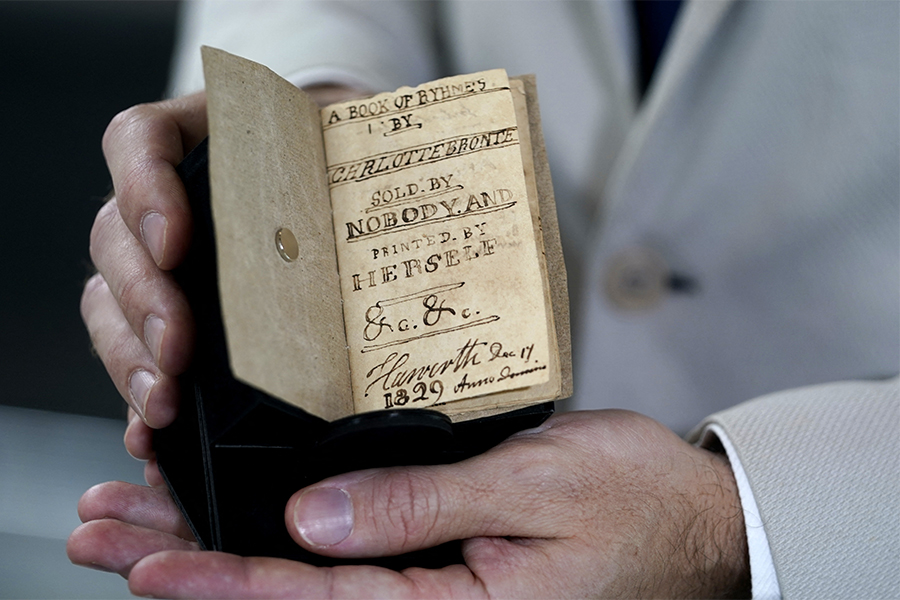 Titled "A Book of Ryhmes (sic) by Charlotte Bronte, Sold by Nobody, and Printed by Herself," the volume is hand-stitched in its original brown paper covers. (Credit: TIMOTHY A. CLARY/ AFP)

New York, United States: A miniature book of poems written by a 13-year-old Charlotte Bronte was unveiled in New York on Thursday after more than a century hidden away. Smaller than a playing card, the 15-page manuscript dated 1829 is a collection of ten unpublished poems.
Titled "A Book of Ryhmes (sic) by Charlotte Bronte, Sold by Nobody, and Printed by Herself," the volume is hand-stitched in its original brown paper covers.
It is the last of more than two dozen miniature works created by the "Jane Eyre" novelist known to remain in private hands.
The book hasn't been seen in public since November 1916, when it sold at auction in New York City for $520.

Now it is us up for sale at the New York International Antiquarian Book Fair, with an asking price of $1.25 million. The fair opened Thursday and runs until Sunday.
The existence of the handwritten "A Book of Ryhmes" has long been known to scholars, having been mentioned in Elizabeth Gaskell's 1857 biography of Bronte.
But the poems themselves, whose titles include "The Beauty of Nature," "Songs of an Exile" and "On Seeing the Ruins of the Tower of Babel" have never published.
Raised in relative isolation in the moorland village of Haworth in Yorkshire, England, Bronte and her younger sisters Emily and Anne entertained themselves by weaving intricate stories set in a sophisticated imaginary world.
Their imaginations spawned novels hailed as classics of English literature, including Charlotte's "Jane Eyre," Emily's "Wuthering Heights" and Anne's "The Tenant of Wildfell Hall."
Like many female writers of the time, they originally published their works under male pseudonyms.
At the start of "A Book of Rhymes," or "Ryhmes" as Bronte spelled it, she writes: "The following are attempts at rhyming of an inferior nature it must be acknowledged but they are nevertheless my best."

She also refers to the imaginary world that the Bronte sisters created along with their brother Branwell.
"This book is written by myself but I pretend that the Marquis of Duro & Lord Charles Wellesley in the Young Men's World have written one like it," she wrote.
The miniature volumes remained in the family until the 1890s, when they began to be sold to collectors in Britain and America.
More than 100 years later they continue to garner great interest.
In November 2019, a Charlotte Bronte miniature manuscript, an issue of her "Young Men's Magazine," sold for 780,000 euros ($850,000).
In December last year, a group of British libraries and museums purchased a collection of books and manuscripts, including seven of Charlotte's miniatures for £15 million ($19.5 million).
New York-based James Cummins Bookseller is selling "A Book of Ryhmes" in partnership with London rare books firm Maggs Bros.
They are doing so on behalf of an anonymous seller "who wishes to make certain of the work's future preservation," they said in a press release.
Henry Wessells of James Cummins told AFP the private owner had found the manuscript " in an envelope tucked into a book."
"It's smaller than a business card, extremely fragile," he said.
"It's wonderful to look at it inside and soon the world will be able to see it," Wessells added.
© Agence France-Presse

Tweets by @forbesindia
Return to Office: Will women continue to pay a price for flexibility?
Ridley Scott to Make a Movie on Ethereum