A law signed by Gov. Kevin Stitt of Oklahoma Tuesday makes it a felony, punishable by up to 10 years in prison, to perform an abortion in the state. It is the latest in a cascade of restrictive abortion legislation proposed in Republican-led states across the country 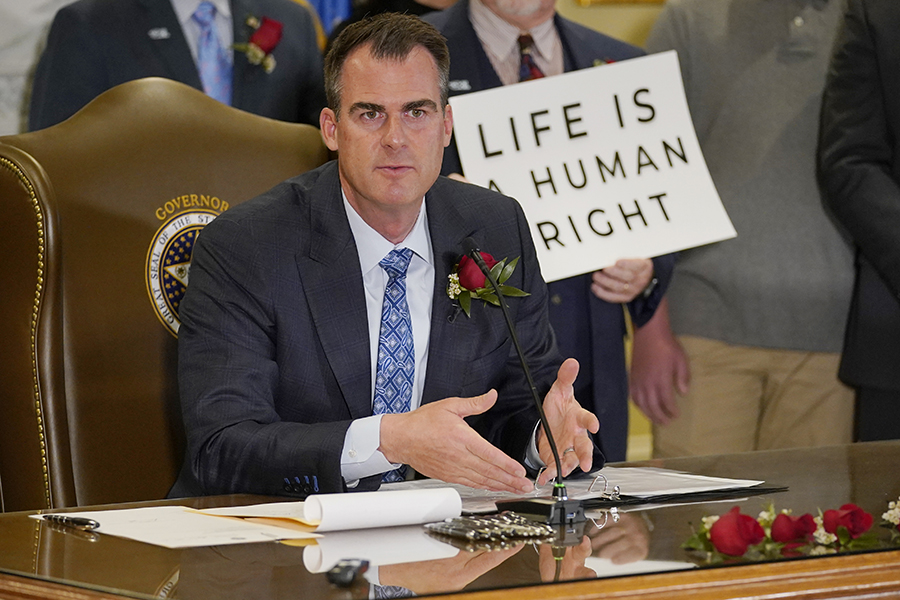 Oklahoma Gov. Kevin Stitt speaks after signing into law a bill making it a felony to perform an abortion, punishable by up to 10 years in prison, Tuesday, April 12, 2022, in Oklahoma City. Image: AP Photo/Sue OgrockiA law signed by Gov. Kevin Stitt of Oklahoma Tuesday makes it a felony, punishable by up to 10 years in prison, to perform an abortion in the state. It is the latest in a cascade of restrictive abortion legislation proposed in Republican-led states across the country.
The measure, Senate Bill 612, which takes effect in August, allows for an exception only “to save the life of a pregnant woman in a medical emergency.”
The bill’s enactment comes after Oklahoma became a haven for Texans seeking abortions after Texas enacted a ban on most procedures last fall, the most far-reaching abortion restrictions to go into effect since the Supreme Court’s 1973 ruling in Roe v. Wade. It also comes as the Supreme Court prepares to rule this year on a case that could overturn Roe v. Wade.
Here are answers to some common questions about the legislation nationwide:
Which states have introduced legislation banning abortion?
Near-total abortion bans have been introduced in 30 states this year, according to the Guttmacher Institute, a research group that supports abortion rights. Bans have passed at least one legislative chamber in seven states: Arizona, Idaho, Wyoming, Florida, Kentucky, Oklahoma and West Virginia. They have been enacted in four of those states: Oklahoma, Arizona, Idaho, and Wyoming.
“What we’re seeing right now is the buildup of decades where state legislatures have been adopting restriction after restriction, and now they’re moving to adopt ban after ban,” said Elizabeth Nash, state policy analyst for the Guttmacher Institute. She said the legislation reflects the efforts of increasingly conservative state legislatures moving to take advantage of rightward shifts in the courts.
Several states already have so-called trigger bans, which will make abortion illegal if Roe is overturned or scaled back. All of the legislation proposed so far is likely to be enacted, Nash said. But some efforts may face court challenges: In Idaho, for example, an abortion ban modeled on that of Texas was set to take effect April 22, but was temporarily blocked by the Idaho Supreme Court Friday. Planned Parenthood said Tuesday that it would “challenge any abortion ban enacted in Oklahoma.”
Even as they pass more far-reaching bans, states have not let up passing other restrictions, including waiting periods and parental consent laws. On Tuesday, a judge in Florida allowed a 24-hour waiting period that abortion rights groups had spent seven years attempting to block.
Which states have reinforced their support for abortion?
With Roe v. Wade’s future unclear, many states are pushing legislation that protects the right to an abortion. Some 30 states and the District of Columbia are considering measures that protect and expand access to abortion, according to Nash. Laws that protect the right to an abortion already exist in at least 16 states and the District of Columbia.
Some states have gone further: Lawmakers in Vermont voted in February to move forward on an amendment to the state constitution that would guarantee the right to an abortion.
A sweeping package of bills in California seeks to make the state a “refuge” for women seeking abortions. The bills would make it easier for clients to access abortion services and for providers to be paid.
A proposal released late last year with the backing of Gov. Gavin Newsom and the leaders of California’s two legislative chambers calls for increasing funding for abortion providers, reducing administrative barriers to accessing abortions and strengthening legal protections for abortion patients. In March, Newsom, a Democrat, signed legislation to eliminate out-of-pocket costs for abortion services.
What is a ‘near-total’ ban? What does it mean in practice?
A “near-total” ban typically refers to a law that restricts abortions except in cases when a patient’s life is in danger, Nash said. Lawmakers are considering two major types of near-total bans. One is a ban modeled on that of Texas, which deputizes private citizens to bring a lawsuit against anyone who performs an abortion or “aids and abets” a procedure. The Texas law bars abortions once cardiac activity is detected in the embryo; such activity typically occurs around the sixth week of pregnancy, before many are even aware they are pregnant.
A bill heading to the floor of the Senate in Oklahoma would go further, enabling citizens to attempt to enforce a ban on any abortion occurring after fertilization. That law would take effect immediately.
Other states are considering 15-week bans. These do not constitute “near-total” bans but are still a significant rollback of Roe, which protects the right to an abortion until a fetus is viable outside the womb, usually considered around 23 weeks.
In which states do the most abortions occur?
According to a 2017 census of abortion providers conducted by the Guttmacher Institute, the state with the largest share of abortions in the United States was California, with 15.4%; New York was second, with 12.2%; and Florida was third, with 8.2%.
Those are three of the four most-populated states, along with Texas.
What ratio of abortions are performed surgically, as compared with those done medically with a combination of pills?
Abortion bans apply to both surgical abortions and medical abortions, which are done using a two-drug combination of mifepristone and misoprostol. Medical abortions accounted for over half of all abortions in the United States in 2020, according to the Guttmacher Institute.
Additional bans on the use of medical abortion pills have been proposed in at least eight states this year and have passed at least one chamber in both South Dakota and Wyoming.
Bans on the delivery of medical abortion pills have been proposed in at least seven states this year and passed in at least one chamber in both Georgia and Kentucky.