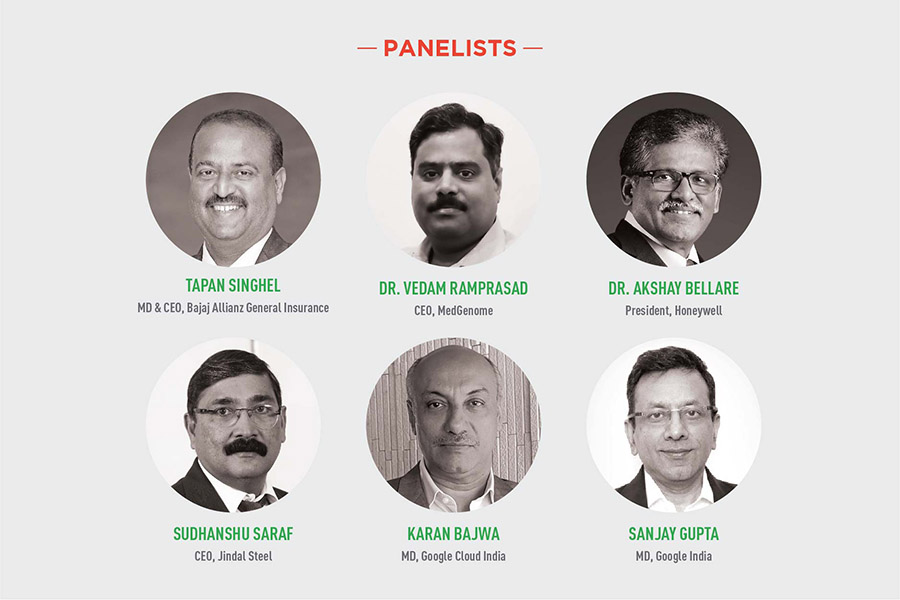 The Covid-19 crisis has become the biggest disruptor in a world where disruption was already a fast-growing trend. The pandemic has altered customer preferences and changed the way organisations work. It has also triggered an economic crisis that has no parallel in the recent past, leaving businesses with the daunting task of reinventing themselves while they strive to survive and revive growth.

In order to decode this predicament, uncover learnings and discuss the way forward for the industry, society and economy, Forbes India has been bringing together the best and brightest minds of our time in a series of virtual discussions. At these events, which are part of the One CEO Club initiative, some fascinating insights have emerged on how health care will be of paramount importance, technology will take centre stage, cash will be king, the potential of the huge untapped section of the society and symbiotic partnerships that will hold more relevance now than ever before.

Being at the steering wheel of an insurance company, Singhel acknowledged that the insurance sector was lagging in terms of digitisation. Although preparatory efforts were on, it was essentially during the time of Covid-19 that the digital shift actually took place at a phenomenal speed. “We were ready, and the adoption happened instantaneously. During the lockdown, we issued 20 lakh policies and settled 12 lakh claims digitally. And I hope that this continues because unlike other financial services, insurance is a conversational sale and clients expect physical documents. So, taking it to digital was a huge challenge.” He also pointed out that interpersonal conversations and being in physical spaces like offices still carries a lot of importance in the insurance sector.

Dr Bellare qualified the unique nature of the crisis, saying, “Typically, while dealing with global recessions, the focus is on shareholders, customers and employees, in terms of the impact on their earning. For the first time, we are also concerned about the health and well-being of employees. That itself is a big shift in our mindset.”  From a business standpoint, he clarified that while his organisation has been transforming into a digital company, the pace of transformation was not as significant as it is in service-oriented sectors, such as IT. Nevertheless, he expected the transformation to get accelerated significantly because of the pandemic. “During the lockdown, we have actually remotely upgraded distributed control systems, which we provide to oil and gas, pharmaceutical and other companies. In the past, when we had to execute an upgrade, we had to go to our clients’ site and actually work on their storage systems. Now we have the capability to do it remotely. This would probably not have accelerated so far, so fast, without this pandemic. We had to adopt this approach and customers were also willing to embrace this change.”

Taking these themes further, Gupta said, “Every business will get disrupted in this new normal. The question we have to ask ourselves as businesses is, are we ready to embrace the disruption?” He called this one of the most radical experiments the world is experiencing, where everybody around the world is going through the same challenge at the same time and a level-playing field is created.

He also observed that many things we believed to be true are being completely dismantled, “We did not believe that it was possible to connect to policy makers without visiting the corridors of power; now we can speak with them on Google Meet. Similarly, we could not imagine conducting business without getting on a flight; we’re getting all that work done, quite efficiently, while staying home. Even children can access education online. Roles are being challenged in society and in business.”

He also shared that enterprises, including his own, are realising the value of cash, as revenues have been hit badly. This, according to him, has highlighted the need to cut peripherals and focus on the core. All businesses, large and small, have also woken up to the reality that they must reinvent themselves by innovating, embracing disruption and seeking solutions.

Despite coming for a legacy company in the core sector, Saraf was able to offer a sanguine review of his company’s performance during the crisis. “We had a great quarter, in terms of growth,” he said. “Since China was infected first and had to slow down its steel production, our exports increased dramatically. We exported more in one month than we used to in a whole year. So, although domestic consumption was sluggish, we had a good quarter.” One of his key takeaways from the crisis and its fallouts so far have been the importance of labour in the demand equation for steel. “Ultimately the worker on the ground is crucial. We have thousands of tons of material fully paid for by our customers, just lying at our plants because even if we are able to send it to our customers, they don't have people to receive it and put it to use. That underlines the extreme importance of labour and the need to care for their physical, emotional and the financial health.” His other major realisation has been the appallingly backward state of infrastructure. “When we started exporting substantially, we realised that if our ports were able to load X metric tonnes per day, those of any developed country were able to load 10x to 20x in one day. Our infrastructure to handle material on the ports is severely lacking,” he said.

Bajwa shared a few lessons he has learned and a few convictions that he will be going forward with. Like most other participants, he agreed that the crisis has demolished significant assumptions with respect to collaborations, travel, how we engage with customers, and various other domains. However, the conviction for him, going forward, is that this is an opportunity to reinvent businesses.

“When things come back to normal, if companies go back to their old ways, they will have lost a great opportunity to reinvent their business,” he said, advising CXOs to consider discounting past knowledge, and introspect on how they would completely rebuild their company from the ground up if they had a clean slate. He said, “Opportunity might be capitalist by nature, but disaster is a democratiser.”

Bajwa also believed that “most companies had reconciled to the fact that technology is an enabler of business, we now know that technology should be at the forefront of business.” He also advocated innovation at scale and at the core of a business as opposed to undertaking pilot innovation, which is not likely to make any impact. He also believed that in order to scale up, businesses would have to partner differently, with different sets of people.

Dr. Ramprasad, who leads a cutting-edge company in the genomics space, recounted his experience of facing three major challenges. “The first was that OPDs and hospitals being shut temporarily was the biggest bottleneck for our business. The second was logistics, which became an issue as we typically get samples daily, within 24 hours of their collection, irrespective of which corner of the country they come from. Lastly, even after we were able to reopen our business, the patients’ psyche had changed. They had lost confidence in the system and were not willing to go to hospitals, [even] for much-needed preventive or diagnostic checks out of fear that they might catch the Covid-19 infection. This could take some time to get back to normal.”

He also revealed that his company saw a 70 percent dip in revenue in March, followed by a V-shaped comeback because crucial diagnostics could not be postponed indefinitely. The spike in revenue was also because the company was prepared to offer Covid-19 testing.

The participants went on to discuss how they envisaged their respective industries panning out in the near and distant future, specifically as a result of adopting technology in the present. Various other themes were discussed, including risk and mitigation, genome technology and the possibility of its use in insurance, automation of physical production processes, cyber security, the importance of building brands that inspire trust, the return of fundamental domestic demand, greater inclusion through digital initiatives, the potential for cloud to transform the bedrock of many organisations—both government and private—in the country, more efficient use of financial capital to access technology, synergistic partnerships that unlock unprecedented value and more.

In their concluding remarks, participants seemed optimistic as they offered their thoughts on the way forward. Tapan Singhel was excited to implement digital tools to enhance customer experiences; Dr Vedam Ramprasad was focused on the need to diversify his portfolio of offerings to de-risk business; Dr Akshay Bellare was confident that smart cities would continue to grow and offer his company immense opportunities;  Sudhanshu Saraf envisaged partnering with technology for maximum paybacks on investments; Sanjay Gupta expected short term pain for India but a big leap in the future, and shared that Google India was looking for ways to make the internet more helpful for the next billion people by solving more local issues, and Karan Bajwa was excited about what Google could provide to enterprises and consumers alike, now more than ever.