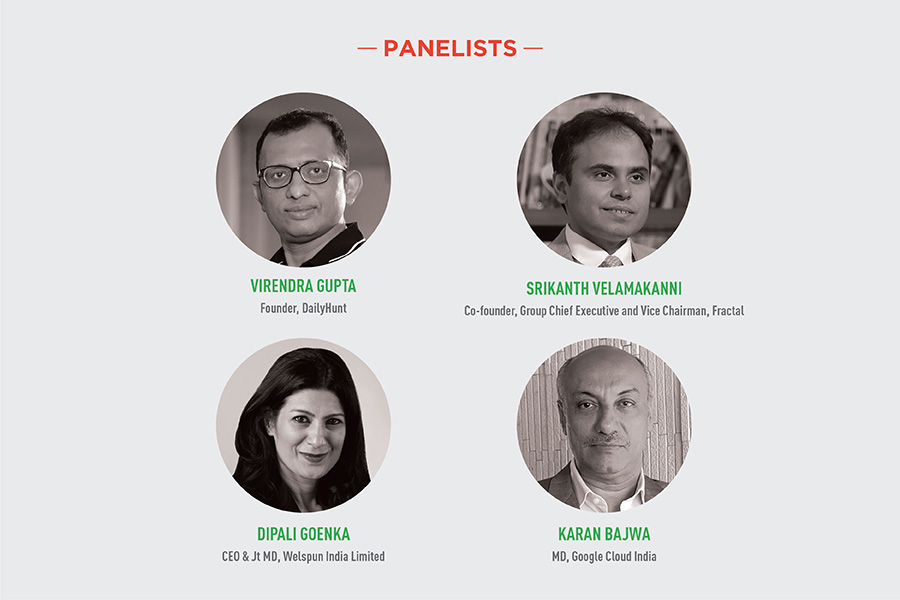 Many things have changed for enterprises in the new normal. Customer preferences, employee engagement, management styles and various other facets of the entire business ecosystem have undergone a transformation.

One of the most notable shifts has been the approach to digital technology. From being considered as just an enabler, it has become the mainstay around which businesses, the world over, have survived over the last few months. Having the right technology in place has enabled business continuity, improved supply chains and mitigated risks. With all these dramatic realizations, organizations have begun to rethink the strategies on which they anchor future progress.

To discuss how enterprise leaders can build agile organizations that can withstand the current and future crises and emerge stronger from the learnings of the present, the Forbes One CEO Club Digital Leadership series hosted a virtual conference between Virendra Gupta, Founder, DailyHunt; Srikanth Velamakanni, Co-founder, Group Chief Executive and Vice Chairman, Fractal; Dipali Goenka, CEO & Jt MD, Welspun India Limited and Karan Bajwa, MD, Google Cloud India. Moderated by Manu Balachandran, Special Correspondent, Forbes India, the participants commenced the deliberations by recounting their experiences of getting back to business, since Unlock 1.0., and introspected on what had really changed for them and their organizations.

Dipali Goenka started by narrating how her company bounced back by April itself. While the manufacturing operations recommenced with safety protocols, supported by doctors, AI, apps, etc., the team at the head office began working virtually. “We even had a virtual audit by Walmart and other customers, for whom we organized virtual factory and showroom walkthroughs to showcase how we were implementing our protocols. Alongside, we repurposed our businesses to manufacture masks and coveralls.” Through these and other products, her company was able to leverage its innovation in terms of the anti-microbial attributes of products that it manufactured for its customers. “The rapid reinventions that have emerged during the Covid-19 lockdowns will kick-off Industry 4.0; it will be led by analytics and digitization and will require us to upskill our shop-floor and white-collar employees. This will lead to an entire cultural change,” she said.

Sharing his experiences of the early lockdowns, Srikanth Velamakanni said, “Our shift to complete work from home was relatively smooth. We had some small hiccups initially, due to data privacy issues but people just rose to the occasion and we began using technology to stay connected and keep working, without disruptions.” On the upside, he revealed, “The nature of our work has changed a lot; review cycles have shrunk from months to weeks.”

Being an asset-light business, working on the cloud, with flexi-work schedules, Virendra Gupta’s company was able to adapt quickly. More importantly, it experienced two significant tailwinds during the lockdowns - one was a direct result of the Covid-19 pandemic and the other was on account of Atmanirbhar Bharat. “As people were unable to go out during the pandemic, they have been turning to their mobiles for news and entertainment. This was a huge upswing for our business. Secondly, the Atmanirbhar Bharat mission and the ban on certain apps facilitated us with a great opportunity. We launched a new app called Josh, with the best AI and ML; the Atmanirbhar Bharat call made sense for us, as DailyHunt has been a pioneer in servicing Bharat.”

Reflecting on the last six months, since the pandemic struck the economy, Karan Bajwa expressed how assumptions that seemed to dictate how work progressed in the past have been demolished completely. “It took me a while to adjust and understand that these assumptions were not relevant. I used to travel 4 days a week; now I have not seen the inside of an airport for the past six months and work is progressing well. We thought teams could not collaborate without physical offices but people have found ways to collaborate. Even our consumption models have changed; I used to love reading the newspaper but now I consume content digitally. Tech barriers have melted away and everyone in an organization gets access to the same technology, as opposed to the past where access was linked to hierarchy.”

He pointed out that beyond the fundamental change in the way businesses run, post-Covid-19, there has been a change in perceptions and mindsets with respect to technology. It has moved from being an enabler to being at the fore of businesses. Going a step forward, he observed that digital has become the core of enterprise strategy and not just a part of the strategy.

Moving on, the participants shared their learnings from the crisis and how they envisage the future.

Dipali Goenka saw two clear trends emerging on the back of current concerns. “By 2030, India has to create 90 million non-farming jobs and accommodate 60 million new workers; creating a manufacturing and IT hub can be the way ahead for India,” she said. And secondly, she emphasized the criticality of health, especially mental health, wellness and care, robust supply chains and upskilling of employees in the future.

From Srikanth Velamakanni’s point of view, every crisis is a test of leadership. “This crisis forced companies to look at every employee as a whole person and not just someone who works for them for 8 hours a day,” he explained. He envisaged that those who lead with empathy will emerge as real winners on the other side of the crisis. With respect to his company’s vision for the near future, he stated, “Our strategy of being enablers for top companies has worked well for us and we'll continue to service them that way.”

Virendra Gupta’s perception of the future, from his company and industry’s perspective was that there is a huge opportunity for short video content. “People want to create and consume hyperlocal, cultural content and we're seeing a lot of traction in tier 2, 3, 4 cities,” he said. “We want to serve Bharat and we are going to double down on our goodwill.” He shared another interesting perspective, saying, “Covid-19 brought about a problem-solving culture in organisations. We want to sustain this momentum and scale it.”

Coming from the tech space, Karan Bajwa envisaged that technology would gain immense relevance for businesses, especially in the Medium and Small Business segment. It would be the tool that enables them to leapfrog their enterprises onto higher growth trajectories. He expected overall spends on technology to go up over the years through a consumption model rather than a capital investment model. “This will create a win-win situation for all stakeholders,” he said. Further, this adoption of technology would not only accelerate progress but ensure business continuity for its users in the face of future adversities. “The response to the next disruption shouldn't come during the next crisis; we should be ready before it hits,” he concluded.