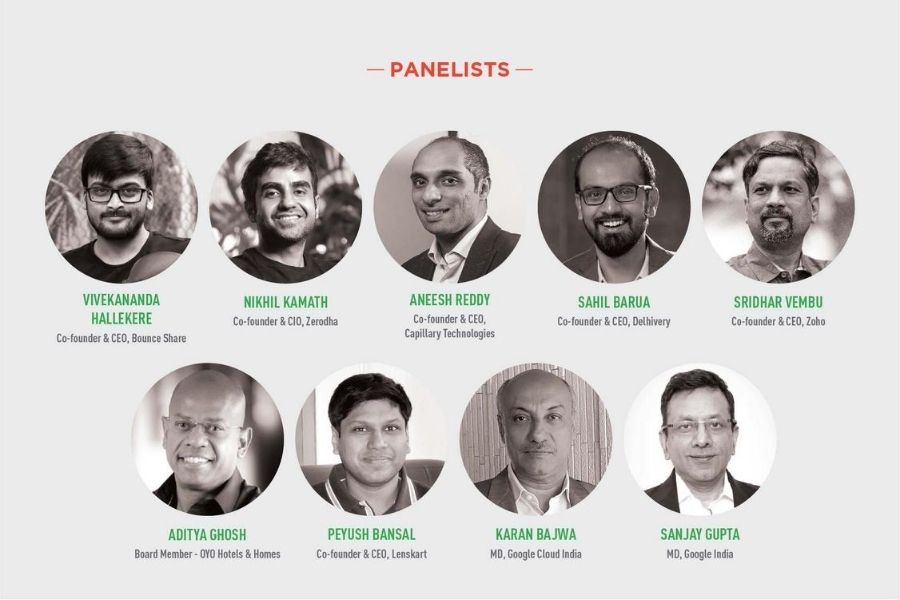 The rapid spread of COVID-19, which is reaching near-peak levels in India, has triggered disruptions at many  in the business ecosystem. At one level, work-from-home has become a necessity; some visionary business leaders envision that work-from-home will persist even once the pandemic is under control, due to all the advantages that come with it. At another level, while there is no doubt that it has throttled many industries, it has also thrown up huge opportunities for a few, enabling them to provide new consumer experiences and revamp processes, improving customer loyalty. At the same time, it has given rise to challenges in terms of squeezing out efficiencies from supply chains, improving cash flow, driving sales, etc.

Aditya Ghosh began by expressing a sentiment that all the panellists shared, saying, “This is an unprecedented scenario and nobody has all the answers.” He went on to share his insights on how the current crisis was extremely different from those that have struck in the past; amongst many other aspects, it is characterised by restrictions being imposed, which are suppressing growth, in contrast to other crises where growth declined as a natural outcome of events. He believed that once the revival begins, the affordable segment of markets for most products and services will definitely lead the recovery. Companies and organizations will still need to meet the fundamental needs of the consumer but they will have to do it at a much more affordable price point. Commenting on the macro socio-economic picture, he said, “The social fabric is going to be really tested. Going back to the way things were would be a disaster for humankind, nations and businesses.”

Extending that thought, Sridhar Vembu explained that the pandemic actually exposed the fragility that already existed in the system, which lacked resilience. “Having anticipated an impact on the non-resilient structures in the global economy, I moved to my village six months ago, not because of the pandemic, but because I wanted to build a more resilient system and organisation for the long term,” he shared. “Here, the impact is minimal; agriculture is on, as usual, with planting, weeding and harvesting. This is where the rubber meets the road and almost nothing was affected.”

Referring to crises of the past and lessons they taught, Karan Bajwa appreciated that every opportunity to learn, which was not implemented, has been an opportunity lost. He also remarked on the unpreparedness for the current crisis, saying, “Business Continuity Plans (BCPs) have been in place but were not necessarily adequate to manage this scale of disruption. I have seen the biggest tech companies crumble. I've seen even the largest companies unable to move to a work from home model for all their employees.”

The discussion then moved to the digital natives on the panel, whose companies were more tech savvy and perhaps more agile, enabling them to take advantage of the opportunities presented by the current situation.

Outlining his imminent challenges and opportunities, Vivekananda Hallekere said, “People may be afraid to use public transport and want to avoid crowds but they may not be in a position to buy a vehicle. Affordability has always been a challenge for a huge segment of the population. Now, in such times, the solution (ride-sharing) entails the same asset being used by multiple people. We are trying to make it safer and have made some simple changes, like introducing duration-based plans. But the margins on this format are not very good. We are also working with NBFCs to create a subscription model. It would have never taken off in India two years ago, but now it could work.”  His baseline solution for tiding over the current situation and for the future too was to conserve cash and be very open to the idea that the way people behave will totally change.

Offering his perspective as the founder of an e-commerce business, Peyush Bansal said, “The key for e-commerce companies is that the fundamentals have to become stronger. The whole model of burning cash to grow businesses has to go.” He believed that the secrets to succeeding, especially in unprecedented times, are agility, adaptability, changing one’s model, if necessary, doing whatever it takes and transparent communication with employees. He observed that e-commerce entrepreneurs are used to thinking very short-term but thinking long-term is what is needed right now. “My motto is work really hard,” he shared. “When the lockdown started, we were at zero. And today we have already bounced back to almost 40% of our business. We had to completely change. It’s a question of survival.” But at the end of the day, he perceives a lot of opportunity for a business like his, in the organised sector.

Commenting on the breakdown in supply chains in India, Sahil Barua said, “Decades of underinvestment in building the right sort of supply chains and underinvestment in technology in the supply chains is starting to really affect the very viability of many businesses, across multiple sectors. It has been difficult to move goods and even foodgrains. This is because we depend on an architecture that was put in place over several decades and has outlived its use.” In the past, India has been serviced by small logistics companies although logistics is actually is an industry that lends itself to dramatic scale. He anticipates that over the next couple of years, India could see a flight to scale, to higher quality infrastructure, more resilient and economical supply chains. So, in an ironical sense, the global pandemic will be a net positive for the logistics sector in India.

Stockbroking, according to Nikhil Kamath, is one of the few industries on which the pandemic has not had a negative impact. “People are at home since they have time to spare, a lot of them are opening trading accounts or have started to invest, which may have been pending on their list of things for a long-time.” Looking to the future, he shared that as his employees are more productive being at home, he isn’t certain that his company will want to have them back, or at least in their earlier capacity. The benefit for most industries would be a rise in margins due to a fall in infrastructure costs. Last but not the least, he is fairly sanguine about the future of the stock market as he envisages significant rebalancing with money moving from real estate to new industries, while some traditional industries may no longer have their place in the ecosystem.

With a business that gives him a ring-side seat to the response of retailers abroad, specifically in China and the Middle East, Aneesh Reddy narrated some learning he had gleaned from these countries. “About 2,000 stores across China, are back to about 60% to 70% of their last year’s sales at present. After the first month, they had recovered only 15%. In the Middle East, there was a 50% recovery in the first week.” Based on his observations, he surmised that the rate of recovery in the initial months and how the recovery would play out would depend on how well a country handled it economy during the crisis.

Shifting gears once more, the panel moved to discussing expectations for the future. In his experience, interacting with clients, Sanjay Gupta shared that he witnessed fundamental shifts in customer behavior. “Tech transformations have become a priority and businesses are trying to reinvent their models. They are looking to technology to deliver better value and lower costs, both at the same time,” he observed.

Looking ahead, Karan Bajwa expects to see a very radical implementation of cost optimization. “The whole archaic model of throwing CapEx at technology will have to change,” he cautioned. Nevertheless, he also saw some very healthy signs of companies recognizing the new normal and laying out plans for the future with radical thinking. “This is the new normal,” he concluded, emphasizing the need for businesses to be ready for similar crises in future and accordingly, prepare new BCPs. He also hoped that regulatory barriers, with respect to technology, would come down in the future and that there would be a massive democratization of technology to make it accessible and affordable to all kinds of customers.

Sanjay Gupta talked about how the current crisis had catalysed Google’s effort to democratize learning in India, saying, “In a country like India, where the need for education is high and the quality workforce is limited, Digital offers the best solution. Google classroom is our initiative to work with schools and colleges, to get them to work digitally. It is not for commercial purposes but simply to facilitate society.” He went on to explain how Google was also looking at YouTube as a very cost-effective solution to take learning to every child in the country.

As the discussion about the road ahead proceeded, it became clear that the participants held a close consensus that the crisis had inadvertently uncovered many opportunities. Rather than revert to normalcy as we know it, there is hope that we can collectively move to new normal that is better in myriad ways, based on technology, collaboration and stronger socio-economic systems that could stand us in good stead during the next crisis.