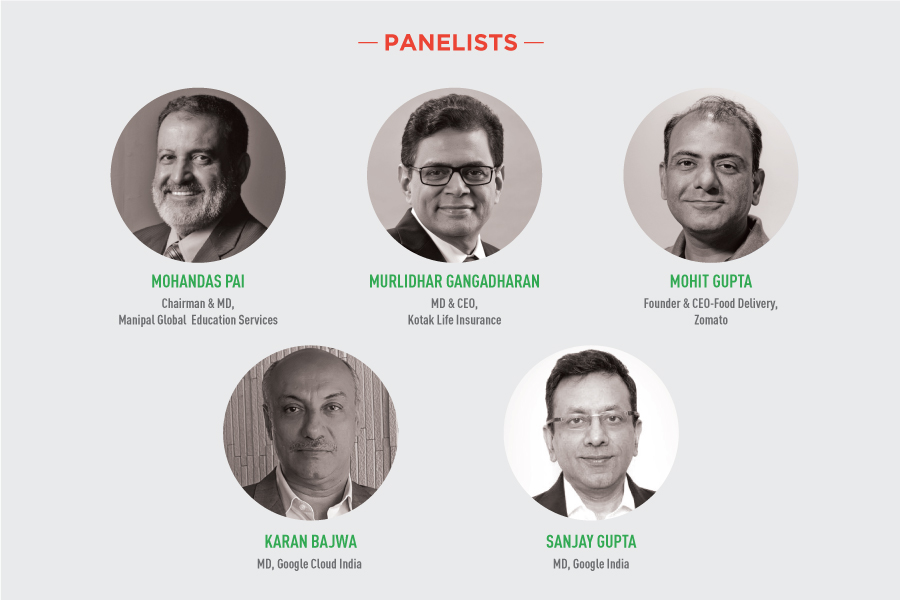 Four months since the first pan-India lockdown in March, the understanding of what is “normal” has changed for individuals and businesses. Preferences, priorities and processes have undergone a transformation. Along the way, the pandemic has also been an equalizer, presenting enterprises and the government with an opportunity to start afresh, reinventing how businesses are run, and creating agile, transparent and resilient organisations that can withstand future crises.

Mohandas Pai started the discussion by highlighting the impact of the pandemic at a macro-economic level. “The entire world is at a point of inflexion as we have never witnessed a crisis of this magnitude. The suddenness and completely global impact are unprecedented. As there is no end in sight, businesses are on survival mode,” he said, observing that a major outcome was the rise of digital in multiple sectors ranging from entertainment and education to banking and health care.

“Consumer behavior and business strategies have also changed. Global interest rates have come down and global competition is intensifying. At the same time, de-globalisation is gaining momentum,” Pai said. According to him, these trends suggest that enterprises must look at new models, improve customer engagement and focus on processes and cost management.

Agreeing with Pai, Gupta added that the pandemic has resulted in a breakdown of conventional business assumptions. “We need to review everything we held true and learn important lessons that the crisis is teaching,” he said. “We have to figure out how to leverage the power of technology against the backdrop of a breakdown in assumptions. Harnessing both these new phenomena presents a massive opportunity for the future.”

Concurring with the panelists, Gangadharan shared how a recent company survey indicated that 98 of 100 top executives believed that Covid-19 was the main reason for accelerated digitization, over and above measures driven by CTOs and CEOs. What helped, according to him, is that customers are also more open to digitization than before. “I do not believe that we will have a new normal. I think it will be an ever-changing normal. But we are learning to keep up with it,” he said.

Sharing his experiences during the past four months, Gupta defined two distinct stages that affected businesses: The first was characterized by concern for human safety and well-being, and employee productivity. “It made us realize how crisis or adversity triggers adrenaline, which spurs performance to almost superhuman levels. Our teams performed at levels which we had never ever seen before, despite all the challenges.”

The second phase, he continued, was a deeper opportunity to step back and re-evaluate relationships with family, career and our country. “The fundamental ways in which companies, cultures and relationships are built will change,” he said, adding that while some changes are likely to reverse once things change, most of them are here to stay.

Here, Bajwa agreed with Gupta, stating that productivity within his own organization and many others has increased post-lockdown, which underscored the breakdown of past assumptions and implementation of new learnings. He observed that democratization of technology has obliterated tiers in technology usage, and that businesses as well as social institutions in sectors like health and education could reinvent and match up to the speed of these transitions. “In the pre-Covid-19 world, everyone would have resisted the transformations that have taken place in the last four months,” he said,  adding that he hoped companies would not go back to the old ways of working once the crisis abated.

Pai believed that there will be around 15 to 20 percent organizations that cannot reinvent to the new normal and stay competitive, and therefore will perish. Others might lose their markets due to macro-level disruptions as a result of contracting GDPs of India and countries worldwide. “The next year is going to be very tough. It will be 1-2 years before things normalize,” he said. “We'll have to become more competitive and productive, in terms of capital and people, rein in costs and sell to customers at lower prices. If you want to be a winner, you will have to accept the new normal and move ahead.”

Gupta added to the discussion by pointing out three specific realms of change that he believed will have a dramatic, long-lasting impact. First, consumption patterns. Second, companies focusing on core business innovations and products due to cash crunch, and third, preference for trustworthy brands as consumers get more discerning.

Gangadharan also agreed that the future will see a mix of temporary and permanent changes. Giving an example of the insurance sector, he explained how people’s need for insurance will remain, but products are likely to become simpler and processes are likely to become more transparent because of digitization. He also agreed that a one-size-fits-all approach cannot be applied to work cultures, and that the nature of the sector and the demographics of the employees would dictate the extent to which work from home could continue. “There are concerns about building culture and team unity while working from home, so we don't think we'll go into 100 percent remote work. It's not economically and socially possible,” he said.

From a technology standpoint, Bajwa said that there has been a high entry barrier in the use of technology for companies at the middle or bottom of the pyramid in India. A major reason for this was the capital-intensive model of technology consumption, where companies have had to invest in hardware, followed by software, and then services and support and finally, security and upgrades to pre-empt obsolescence. However, he added that is set to change as the models of technology use have evolved to become more consumption-based rather than capital-intensive.

Bajwa concluded with another interesting observation that while India has been a success story when it comes to services arbitrage, it now has a huge opportunity to be a hub for product innovation as well.