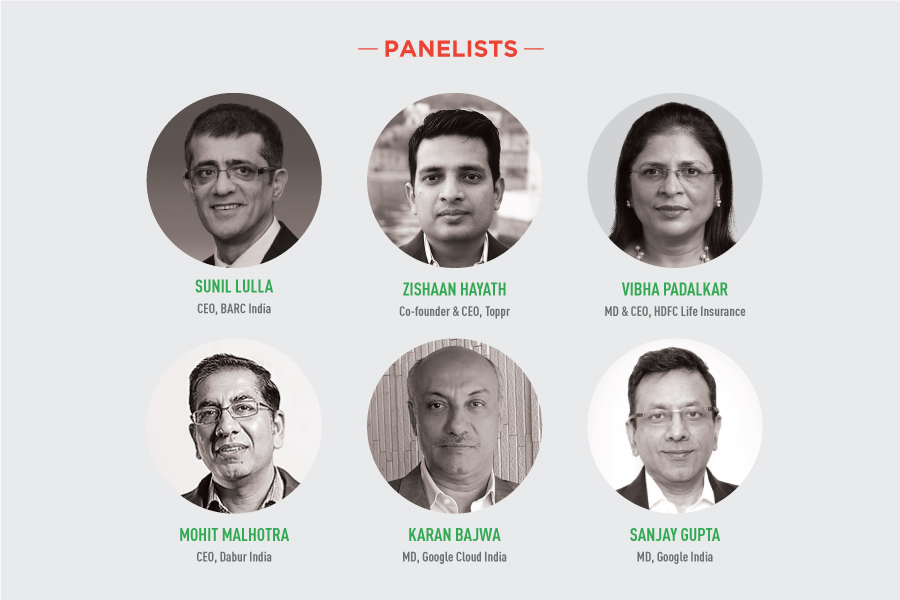 The Covid-19 pandemic has tested the ability of enterprises and individuals to adapt to a crisis, and implement new ways of running their businesses and living their lives. While some changes might rescind once a semblance of normality returns, other transitions will be irreversible. The permanent changes are likely to gravitate toward the use of technology to achieve greater efficiency and build relationships. The economic hiatus has also provided companies with the opportunity to reinvent themselves in different ways.

As the country enters its next phase of unlocking in these uncertain times, One CEO Club – a Forbes India initiative, in partnership with Google Cloud, invited business leaders to share their experiences and vision for the future. The panel, comprising Zishaan Hayath, co-founder & CEO, Toppr; Vibha Padalkar, MD & CEO, HDFC Life Insurance; Mohit Malhotra, CEO, Dabur India; Sunil Lulla, CEO, BARC India; Karan Bajwa, MD, Google Cloud India and Sanjay Gupta, MD, Google India, was moderated by Manu Balachandran, special correspondent, Forbes India. They discussed what changed for them and their organisations over the past five months and where they see themselves headed in the foreseeable future.

Padalkar commented that the recovery might not follow popular trajectories like ‘V-shaped’ or ‘U-shaped’ or even ‘L-shaped’. Instead, she said, it could be ‘K-shaped’, with independent paths of some companies that will survive and prosper post the economic downturn, and others that will let themselves slide downward.

“Companies that can think on their feet are set to get bigger,” she observed, recounting how her company was quick to launch many initiatives as soon as the lockdown was announced. These included keeping employees engaged and ensuring their physical and mental wellbeing, ensuring better efficiency and business outcomes, and increasing its digital initiatives, including accelerating its adoption to the cloud. “This is a penny-drop moment,” she said. “If we don't use this opportunity, we only have ourselves to blame.”

Remarking that there has been a lot of fear around the pandemic and suggesting that the media could have communicated it more sensibly, Lulla said, “More than before, a lot of people have been watching the news. They seem to be seeking credible information.” He revealed that the average individual spent about four hours and 45 minutes in front of the television every day; this was considerably more than the earlier average. During the crisis, online gaming, YouTube, OTT platforms and news apps also saw a considerable pick-up. Looking to the future, he opined, “While there has been an increase in e-learning during the Covid-19-induced lockdowns, bridging the digital divide at the household level will be key.”

Gupta noted that the crisis had blown away to pieces many work-related assumptions that were widely held. These included the need to travel and meet people to get business done. He also observed that there has been a rapid adoption of digital technology across companies – from large, established organisations to the smallest retailers. Essentially, in the last few months, businesses have adopted changes that would have otherwise taken them four to five years to implement.

Another observation he made was that companies have been pressured in terms of their money or cash, leading them to focus on what is core to the business and prioritise spending accordingly. On a social note, he observed that inequalities had increased since the pandemic struck both at the individual level and, as Padalkar pointed out, at the enterprise level.

“We never imagined that we would move to a work from home model; and here we are, completely working from home, at present,” agreed Hayath of Toppr. Interestingly, however, he observed that despite working from home and shutting down offices, he has more access to and interactions with his employees than before. Another change which is counterintuitive, he observed, is that the demand for engineering talent has increased, making it more expensive. This underlined the increasing trend of sourcing and outsource work across the world.

Lastly, he found that his company’s business has seen a sharp increase during the lockdown, in terms of traffic and not revenues, while schools and educational institutes remained shut. “Virtual schools can possibly delivery better education than traditional schools. Once the Covid-19 crisis blows over, a segment of virtual schools could continue to exist, to deliver education at a lower cost per student,” he said.

Hayath continued that the increasing emphasis on virtual learning has encouraged online educators and other stakeholders to actively reimagine what technology can do to transform education in India. “The unimaginable has happened. Schools rapidly adopted technology and are running completely online, end to end, from the morning prayers to the national anthem before dispersal, on video-conferencing and other tools, right from grades KG to 12,” he said.

Malhotra of Dabur described the pandemic as an eye-opener for the business, which required him to pivot in order to reach higher levels of success. He explained that at a cultural level, conventional organisational hierarchies have all been destroyed and replaced with transparency, trust and technological interventions. “As a result, the vision has been percolating to every person in the company and decision-making cycles have been shortened.” he said. “With shorter lead times, we have been able to conceive and launch innovations in the market in a matter of months rather than years. This is because everybody is working in tandem and not sequentially.”

Admitting that technology has been a big enabler, he revealed that his company has been channelling 25 percent of total spends to digital marketing since Covid-19. The buying behaviour of consumers had changed, he shared, with the total turnover from their ecommerce vertical increasing from 1.5 percent to nearly 7 percent. All these changes, Malhotra said, made Dabur agile, nimble and fearless, as a company.

Bajwa also noticed changes in the SMBs’ technology consumption models, which he said have now matured to a point where they can consume technology on-tap rather than in bulk deployments. Previously, businesses would have to deploy investments towards buying hardware, software, services, security, maintenance support and then invest again to keep the technology from going obsolete. He also saw a swift transition to what he called ‘democratisation of technology’. From a situation where technology access and usage decreased as one moved down the pyramid of the organisation, there is now a fundamentally different model of technology consumption, based on a clear realisation that everyone needs equal access to technology.

In all, the panellists agreed that is a distinct difference between the reactions of companies in the first couple of months of the lockdown and thereafter. As Bajwa observed, “Initially, they were largely trying to stay afloat and get people settled into work-from-home modules by implementing basic technology that enabled remote access. This was based on the assumption that things would come back to normal and that they merely had to stay afloat in the interim.”

As the new reality started setting in, Bajwa continued, business leaders had a complete turnaround from the resistance they might have displayed earlier, because they seemed to realise the power and resilience of their businesses. The same leaders who would earlier have had objections about larger scale deployment of any change, including technology, essentially saw the crisis as an opportunity to fundamentally reboot their enterprises.