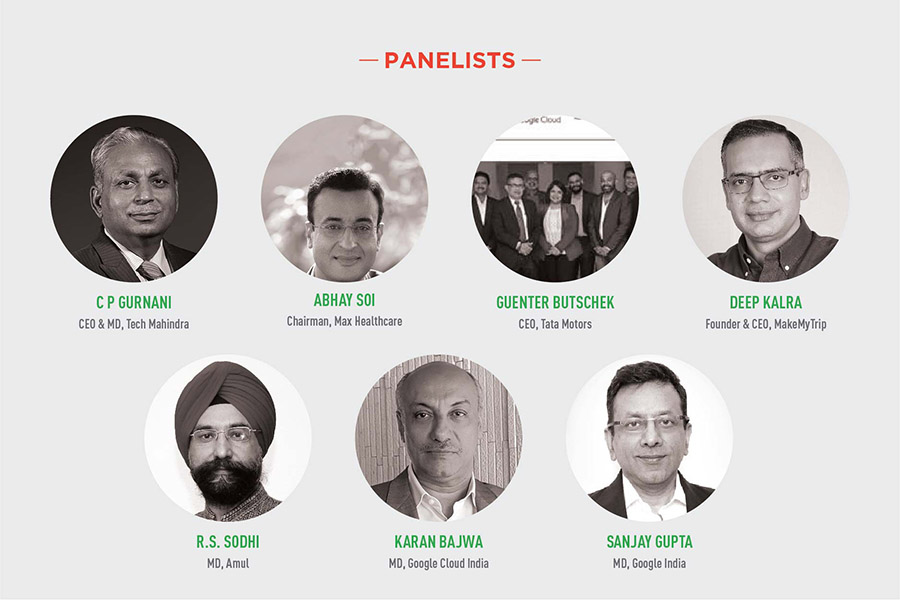 The suddenness and magnitude of the lockdown left companies in the lurch, and compelled them to think on their feet. With employees required to stay home to remain safe, they had to quickly adjust to remote and virtual work routines. New ways to measure productivity were devised, while keeping employee well-being (physical, mental and financial) a priority and serving customers continued to be the ultimate goal.

This shift in organizational behaviour, which resulted from the transition, was supported and defined by the technology that different organisations had access to or adapted to. It helped organisations prepare for a new normal—in terms of workflow, productivity, and more— and also promises to drive progress in the new normal.

Deep Kalra, whose travel portal has been buzzing with international and domestic travel coming to a grinding halt, said, “Our volume for cancellations and rescheduling went up 7X when the lockdown started and, at the same time, employees were not allowed to come to office.” To add to that, it took a few days to get the call centres up and running, which “allowed us to use IT smartly and our employees could attend to customers from home. But there was a period of about two weeks, which were terrible for the customer and our company.”

Additionally, initial uncertainty on the new rules and guidelines for airlines meant solutions couldn’t be built into APIs that otherwise captured real time changes and things had to shift back to manual control. “It was a really tough phase. People were working around the clock and we still couldn't open or give satisfying responses to our clients.” he said.

In contrast, in Gurnani’s experience, the transition to work from home was relatively seamless. “As long as we can provide laptops and internet connectivity, we are good to go.” But even then, there were challenges. His company employs around 80,000 people, with the average age of 28 years; many of them live in paying guest accommodations and did not have bare necessities like a table and a chair. “Some of them were asked to leave their paying-guest accommodations because their landlords panicked in the face of the lockdown; we took it upon ourselves as a HR initiative to find accommodation for such employees,” he said. Equipping employees with fast internet connectivity was another step taken by the company.

Gurnani noted that the company’s digital transformation has accelerated during this unusual phase. “In general, after the initial pain during the first few weeks, life was lived on Google Cloud or a Google Hangout or any of the equivalent systems,” he said.

Google Cloud’s Bajwa remarked that “The one thing that hit us was that most enterprises fell short of their ability to drive 100% remote working and were not ready to invoke BCP (business continuity plans) for a 100% of the users for a very long time.”

However, the highlight was that while digital native customers have always been open to disruption from an infrastructure and innovation point of view, suddenly even traditional companies were seen following suit. Many companies he spoke to, he shared, had dropped their mindset blocks and barriers with respect to adopting technology and were welcoming innovation and transformation.

In response to the crisis, as remote work became key Google decided to democratise technology, taking away commercial barriers with a philosophy to serve, not sell. For instance, the Google Meet platform was made available to all businesses for the next six months, free of cost. Bajwa says he envisions technology moving from being an enabler to being in the forefront.

In the automobile sector, Tata Motors’ Guenter Butschek revealed that his company, had already moved 4,500 of its 12,500 white collar employees to work from home before the lockdown happened. The firm’s IT team had to step in initially to provide laptops, computers and even internet connections. However, Butschek points out that being an engineering manufacturing company it is impossible to work from home 100%. “At the same time, social distance at the production line can be enabled, but it will be at the cost of productivity and efficiency.”

To engage potential customers who cannot test drive Tata cars during the lockdown, Butschek said “We are getting a lot of digital inquiries about our cars but people are unwilling to test drive due to the fear of contagion. So, we have to work on enabling the beginning of the customer journey - the discovering, with a complete digital experience.”

Apart from that, he directed his front-end sales team to reinvent itself to cater to customers digitally. “I believe that digitalisation needs to give a new experience and must become an end to end solution for a customer journey,” he added.

Managing a hospital amid a pandemic throws up all kinds of challenges, however, customer—in this case, patients—service cannot be compromised. Abhay Soi, while sharing how his multi-specialty hospitals were converted into Covid-19 care and treatment centres overnight, said “On the one hand, we experienced a slump our core business--transplants, oncology and such. But on the other hand, we also had to ramp up capacity and operations to meet the growing surge in demand for Covid-19 treatment and care.” His company volunteered its flagship hospitals in Mumbai and Delhi to look after positive patients.

“We started preparing in early March. We began learning about clinical protocols, preparing our facilities, getting adequate PPEs and familiarising our people with them, changing the roster stream and planning the logistics for our healthcare workers and doctors, right from lodging and transport to food and shifts.” Due to the rising number of cases, the hospitals also had to find ways to squeeze in more beds, ventilators and drugs, without letting the efficacy of treatment drop.

“At the same time, we also had to provide for our regular patients who had serious health issues.” The hospital moved its regular patients to the digital platform and teleconsulting, which was not even 1% of the business earlier, and grew to about 20% during the lockdown. “Overall, it is a tremendous learning experience for the entire organisation as no one was prepared for something like this,” he summed up.

Sharing a different perspective, Amul’s R S Sodhi explained that his company had a rather conservative approach towards ‘work from home’ before the crisis. However, during the crisis, the management has taken crucial decisions virtually, especially related to supply chain and logistics. These decisions were taken and implemented within a matter of a few days, which earlier would have taken months, he shared. “Our confidence and trust on remote working has increased tremendously since the lockdown. Even our distributors, who usually expect physical meetings and interactions, were amenable to connecting virtually, expressing confidence and contributing with spectacular suggestions,” he said.

Google India CEO Sanjay Gupta pointed out that it is now clear that at the business level there is a new-found openness to change. Similarly, individuals have been using their time to equip themselves with new skills, as Google’s search queries revealed.

Gupta also spoke about the more humanitarian and social efforts of Google, during these crisis times, “Our effort has been to provide the right information in the last few months, through all our surfaces - be it regarding food and shelter or communication from the Ministry of Health – by responding to almost 2 billion COVID-related queries. He talked about an opportunity in the informal sector for Google to ‘join the dots’ for the poor and underprivileged, by creating a marketplace that could help them find jobs and scale up.

Butschek highlighted greater levels of collaboration and intensive partnering has led to strengthening of relationships and exchange of constructive communication all along the supply based and ecosystem at large. A few but significant silver lines of the pandemic.  Bajwa envisions we’ll see differentiated partnerships, among suppliers and intermediaries or stakeholders of a single market in the post Covid-19 world. Deep Kalra affirmed that the crisis has brought various ecosystem players together—“We realise that they are all in it together and we have to all rise together,” he said.