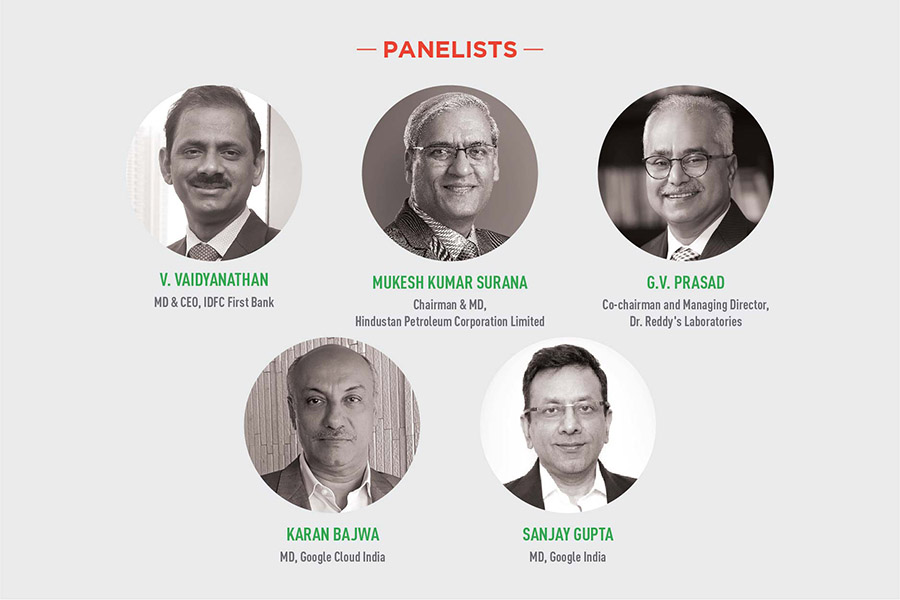 The Covid-19 crisis, specifically the lockdown and its implications for businesses, has been an eye-opener for companies, governments and individuals. It has changed the way we perceive and cope with work and life. At the enterprise level, it has provided opportunities to reinvent businesses, making them more agile, transparent and resilient.

The last few months have also taught businesses precious management lessons, some of which have replaced conventional principles and practices, primarily because employees and customers have evolved and the ecosystem has changed significantly too.

The panel was moderated by Manu Balachandran, special correspondent, Forbes India, who opened the deliberations by inviting the participants to share their experiences of the past few months and the key lessons that they had learned in the context of their respective domains.

After outlining the broad contours of the banking sector in India, in terms of size of cumulative loan book, aggregate deposits, market capitalization of listed entities within the universe and growth dynamics, Vaidyanathan remarked that the banking industry, like most others, “got punched in the face quite hard, overnight, by the arrival of Covid-19”. He explained how the pandemic was different from other crises that have affected the economy, like the financial crisis of 2008 or demonetisation, both of which were largely money-induced. “This is the first time we are seeing a social distancing-related crisis,” he said. “But it wouldn’t be a cliché to say that opportunities have emerged and we are learning new tricks.”

Gupta mentioned that he observed changes in both the consumer-facing business of Google India–comprising products and services such as Google search, YouTube, Google Play, Google Pay etc–as well as the tech-segment of the business that offers cloud and technology transformation solutions to businesses.

“In the tech business, the opportunity has grown dramatically because almost everybody is more open to the idea of leveraging digitisation to change their business. On the consumer front, individuals have been spending considerable amounts of time using digital and technology in some way; they are either playing games, watching something, streaming content or just surfing. Both consumers and businesses have demonstrated openness to change,” Gupta said.

He admitted that he had never imagined that businesses could be built without meeting face-to-face or constant travel. “I'm sure there is an emotional connect that gets formed when you meet people but I can clearly see that our business is working well despite being conducted remotely. Almost everybody from our organisation is working from home. Experiencing the true power of technology has been an amazing learning for me.”

Surana of Hindustan Petroleum Corporation Limited talked how the state-run oil major witnessed a double black swan event. “At one end, the Covid-19 situation distorted demand, hiking the need for LPG and subduing the need for diesel and petroleum; and on the other, the price war triggered by OPEC going back and forth on its supply policies created a suddenly and unrealistically large supply gush.” Amid all this chaos, his company had to deal with adjusting the supply of its products and simultaneously ensuring that these were delivered through a supply chain that was haunted by fears of the contagion. He also explained how the company had to quickly implement measures to ensure the safety of its employees. “I discovered the resilience of the total system and the ability of my people to adapt and respond to the situation. But the biggest learning was that everything could be managed in the new normal, through remote meetings with everyone from the ministries in Delhi and our own Board to employees, suppliers, distributors, etc.,” he said.

Bajwa of Google Cloud highlighted that the assumption that office spaces are important was also challenged. “Except in the case of manufacturing organisations and a few others, that assumption has also been challenged,” he said, adding that there has been a tiered model of technology adoption. “Now, there is a clear realisation that democratisation of technology is the way forward as every individual in a company needs the same access to technology as CXOs.” These developments have helped Bajwa envision a fundamental reboot at workplaces where the ways of working will be reimagined. According to him, the ‘new world’ has offered businesses an opportunity to scale up through unique partnerships that were unimaginable in the past.

Coming from the pharmaceuticals and healthcare sector, which is in the centre of the storm, GV Prasad believed that the government has also done its bit of being an enabler to industry by facilitating the movement of essentials and people despite the lockdown. Another positive observation he made was how the health care ecosystem rose to the challenge, focusing on innovation, repurposing of new drugs in vaccines and managing their supply chain with great intelligibility despite all the chaos and panic. “We saw extraordinary clarity in the crisis— our people understood what was important and what was superfluous. For us, our employees' safety and supply chains were our key priorities,” he said, adding that one disturbing reality highlighted by the pandemic is that “our public healthcare system and our primary care infrastructure are woefully inadequate”.

Balachandran then steered the discussion towards what the participants expected to see next, post the pandemic. Vaidyanathan believed that while India endeavored to move towards greater inclusiveness even before the Covid-19 crisis, the pandemic would actually rapidly accelerate the pace. This, he attributed to the pivot to digital banking, which would quickly connect to the bottom of the pyramid and help accelerate India’s drive for inclusiveness.

Concurring with Vaidyanathan, Gupta opined that the current transition provided businesses with the opportunity to rebuild and reinvent themselves, which if ignored, would be at their own detriment. “Businesses were getting disrupted even earlier but the change or disruption is going to be even greater. They will reinvent their models using technology and the shift that I see is the speed at which, at least in India, businesses are reinventing, repivoting and creating a new model,” he said.

Bajwa further explained that technology could be the pivot around which companies reinvent themselves. “The technology consumption model was based on putting in large chunks of money upfront, and reaping the benefits over time. During this crisis, these consumption models have gained maturity and moved from being lump sum capex to pay-as-you-go opex,” he observed. This, he concluded, presented a huge opportunity for businesses to transition from ‘buying technology’ to ‘partnering for technology’, which would ultimately facilitate reimagining and reinventing businesses.