In leading the company to operational excellence, he placed India at the centre of its global services 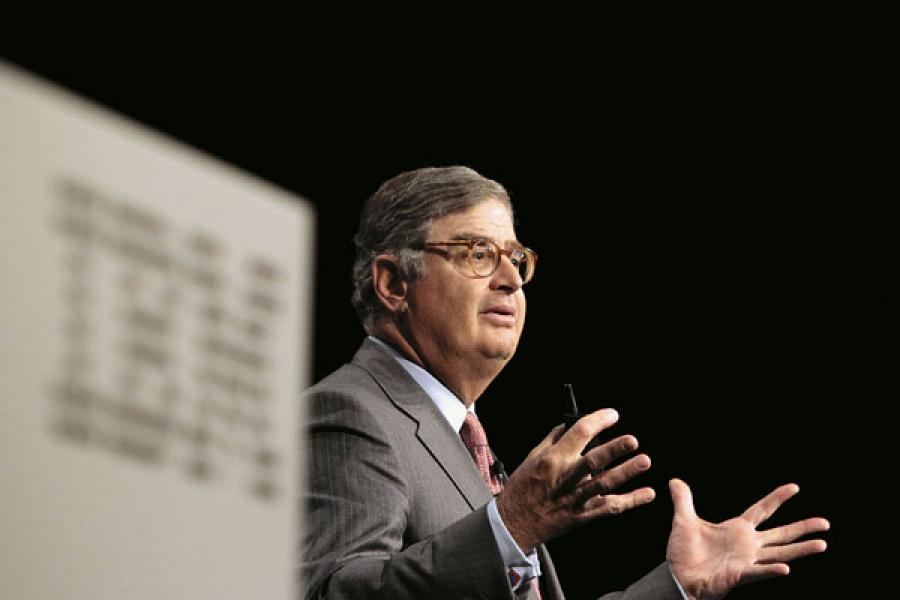 Earlier this year Sam Palmisano, 59, quashed all rumours of retirement. He told investors he “wasn’t going anywhere”. Retirement is somewhat customary at IBM at the age of 60. On the contrary, he is busy marketing his grand idea of a “Smarter Planet”, an instrumented world in which 70 percent of the global population will be urban dwellers by 2050 and where devices, people and cities will all be connected.

At a time when no information technology company gave India a chance, Palmisano’s leadership created an outsourcing story in India, for India, says Arvind Mahajan, an executive director at KPMG India, referring to the $700 million IBM-Bharti deal of 2004. That model has been exported to Malaysia and to Africa. Credit Palmisano with seeing the “emerging giants hypothesis” — that the next generation of multinationals would come from emerging economies — well before anybody else did. Today, owing to many of these moves, IBM expects emerging markets, which account for 21 percent of its revenue, to reach 25 percent by 2015. Last year saw IBM dominate the telecom sector in India.

Given the stolid nature of IBM, Palmisano’s decision now appears like a huge punt. By making India the nerve centre for servicing 170 local markets through its global delivery network, it not only achieved its biggest ever non-linear growth, but also found an enviable head-start in one of the fastest growing emerging markets.

“Sam has visited India several times, he has developed a close relationship with Sunil Mittal… Now Bharti goes to Africa, and IBM goes with it,” says Mahajan, who, as a PricewaterhouseCoopers consultant came to IBM when it acquired the consultancy in 2002. Mahajan recalls how IBM rallied millions of dollars and 14 months of meticulous planning behind its first telecom deal in India.

The rest is a well-recapped story — of how IBM applied its Bharti learning to other deals and how it replicated the telecom template in other verticals like real estate, media, entertainment, or even rural banks.

Palmisano has followed an aggressive internalisation strategy that no major technology company can match. “Under Sam, IBM will become more Asia-centric,” says Jagdish Sheth, professor of marketing and strategy at Goizueta Business School of Emory University in Atlanta, USA. China is computerising everything, leading to an explosion in IT services, but since there is no domestic IT company, IBM becomes the default choice, he says. In India, besides the large computerisation opportunities, IBM will also focus on “global talent sourcing”. “IBM has been very strong in Japan for 50 years and as both Japan and Korea begin to expand their manufacturing in India, IBM will become the de facto system integrator,” Sheth argues.

A lot of this direction, many IBM executives recount, comes from Palmisano. A personable leader, he leads with inspirational concepts and the mammoth organisation follows in action, backing it all, IP by IP. In 2008, when the financial crisis broke the back of most tech companies, IBM not only did well, but Palmisano unveiled his “Smarter Planet” vision. He laid down what services and products would be needed; the company since then has built hundreds of reference customers around it.

In the ruthless technology world, such leads are transient. A major challenge, says Rosabeth Moss Kanter, a professor at Harvard Business School, will be “to keep a culture of continuous innovation as some of IBM’s strategic bets, such as smarter planet” are now followed by other companies.

A key unresolved issue is: How is Palmisano preparing the top leadership for the increasingly globalising nature of IBM?

In July, the top management at IBM was reshuffled and four executives below him were given more responsibility. That may not be enough if you look at other multinationals like General Electric which have moved senior global executives to India.

IBM certainly is in no crisis but if Palmisano were to follow the advice of change that he gave to a group of executives at an Asian Leadership Summit in 2008 — “You could create the future or defend the past” — he’d set the stage for the next centennial.