The New Cities Of India

Going private may be the answer to most of the ills that pervade our crammed cities, but the government will need to smoothen the road to make this happen

With controversies on migration to cities and increasing infrastructure problems in metros like Mumbai and Delhi, the topic of urbanisation is forcing itself on to the public sphere. There is a strong view worldwide, that cities that are planned and developed by private enterprises are the solution to these problems.

According to Amitabh Kant, managing director and chief executive officer, Delhi Mumbai Industrial Corridor Development Corporation (DMICDC), “There is a very strong case for planned cities. India is going to experience rapid urbanisation involving around 300 million people within the next two to three decades. This means that they will either drift to existing cities, thus congesting them further, or move into new cities. If it is new cities, then they will have to be either cities that are planned, or cities that evolve, more or less in an unplanned manner. The former is better.”

The concept of private cities is gradually gaining acceptance in India. If all goes well, India should have at least 30 private cities across the country by the end of this decade. The number could be even greater, depending on the manner in which India’s policy makers allow this concept to germinate.

The concept isn’t new. Private cities have existed since the 12th century AD. According to an article in the August 2010 issue of The Atlantic, the Germanic prince, Henry the Lion, had just conquered Lübeck, a sleepy fishing village in the territory that is now North Germany. He wanted to make it a big port town, and so developed the place. But to attract merchants, he formulated a charter for Lübeck, a set of “most honourable civic rights”. Merchants who settled in Lübeck would be exempt from duties and customs throughout Henry the Lion’s lands, which stretched south as far as Bavaria.

But closer home, India too is now home to various types of private cities. There are private housing and commercial enclaves like those of DLF in Delhi and Hiranandani in Mumbai where the entire security, street maintenance and administration of the estate is managed by the developers. Then there are the larger industrial townships like Jamshedpur, Mithapur and Modinagar, where the entire town’s administration is managed by the industry promoter (often uneasily) with the consent of the state government.

Now it is the turn of private cities where you have several industrial complexes, planned infrastructure, and well-structured residential areas. DMICDC is planning several such cities. The first phase of industry-city development will involve six locations, and the second phase another 18. 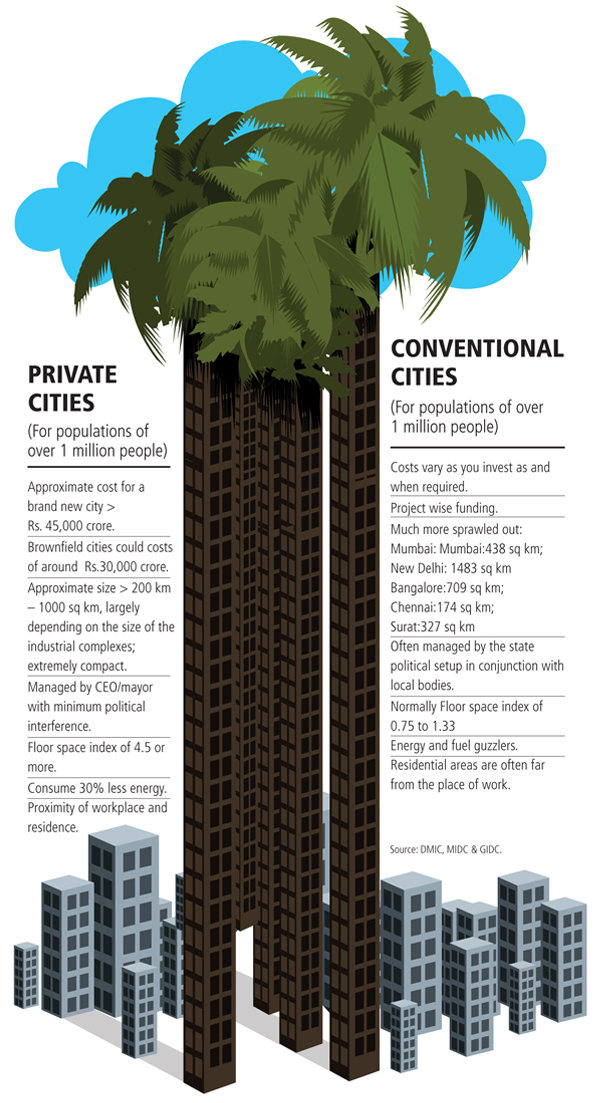 The first to conceptualise this was Infrastructure Leasing & Financial Services (IL&FS), but others too have begun implementing such cities on a smaller scale. One of them is Amby Valley, promoted by the Sahara group. More recently, there is the case of Lavasa. (Spokesmen from neither project was available for comment.) But both Amby Valley and Lavasa are different from private cities in one respect. They promote second homes, or retirement houses, and are not cities where people take up residence because of good education and employment opportunities.

In fact, most people agree that the cities of the future will be different in many ways. “When cities like New York and London grew, they had the luxury of having sprawling cities. Petrol was then thought to be inexhaustible, so places of work could easily afford to be far away from the places of stay. Today, both water and energy supplies are under pressure. Sewage and water pipes cannot afford to be hundreds of miles long. Modern cities will have to be more compact,” adds Kant.

The very need to make the cities compact will require them to grow vertically. Most urban planners believe that the floor space index (FSI) will have to be around 4.5 as against 0.75 to 1.33 for most cities catering to a population of 1 million to 15 million. Since these cities will have to be built in record time, and not allowed to ‘evolve’ over 50 to 100 years’ time, there will be extensive use of steel and glass and pre-fabricated structure. Instead of promoting private vehicles plying the roads, more emphasis should be given to Rapid Transport Systems (RTS) by bus or metro. That will make the atmosphere healthier, living costs easier on the wallet and places of residence closer to the places of work or study.

But the biggest challenge will be to get both industry and people into these planned cities as quickly as possible. Typically, people go to a place where there are jobs. However, jobs get created only in places where skilled manpower is available. Local governments will have to invest in skill development centres in the planned new cities. Equally critical will be the job of getting social infrastructure into place. People will not move in till they have good hospitals, health centres, and most importantly, schools and educational facilities for their children.

This requires financial packages which allow for 20 year loans at reasonable borrowing costs, with a moratorium on payments for at least 10 years. Since these are long-term loans, they have to enjoy some kind of guarantee, either from a well-capitalised organisation (which is what DMICDC hopes to be) or even from governments both at the state and centre. Much of the funding support of the DMICDC will be through the Sumitomo Bank of Japan. Not surprisingly, many of the industrial complexes that will come up in each of these industry-city clusters will be from Japan. Obviously, developers also need to factor in the return to investors and the city developers and also the cost consumers of these spaces will pay, either for industrial complexes or for houses.

Eventually, the success of these cities will depend on the way they are managed and promoted. This will require a strong administrator who works like a city-CEO, the way most mayors are in many big and successful cities in the world.

Such cities can also become benchmarks for other conventional cities to adapt, or risk losing people as they would move away to these new centres. As an older city becomes less attractive, property prices fall, the stakeholders lose and voters get disillusioned. That is a risk no political party would like to take. It is quite possible that the new cities could lay down new standards of governance.

Tweets by @forbesindia
Book Review: Icons & Reflections
I Passed On the Rescue Tank