The United States added Huawei to an export blacklist in May, but its sales growth in the recent quarter shows that it has weathered the Trump administration's efforts to hinder it 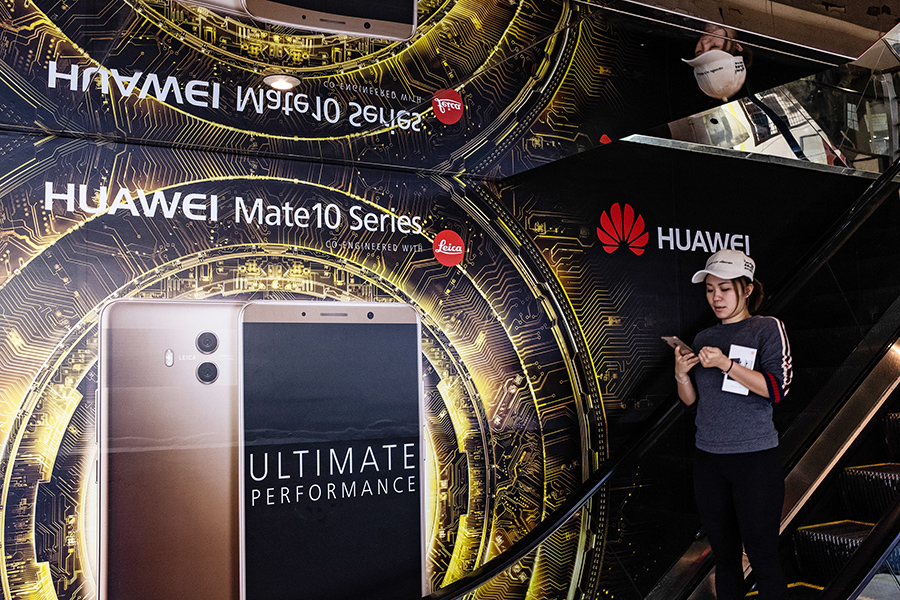 FILE -- An ad next to an escalator for Huawei, the Chinese maker of phones and telecom gear, at a shopping plaza in Hong Kong, Jan. 4, 2019. Huawei said on Wednesday, Oct. 16, 2019, that its sales growth recovered in the most recent quarter, suggesting that the technology giant has been successfully weathering the Trump administration’s efforts to stymie its business around the world. (Lam Yik Fei/The New York Times)

BEIJING — Huawei said Wednesday that its sales growth recovered in the most recent quarter, suggesting that the Chinese technology giant has been successfully weathering the Trump administration’s efforts to stymie its business around the world.

The United States added Huawei to an export blacklist in May, restricting its access to many of the U.S.-origin parts it needs to make its smartphones and telecom gear, and causing the company’s revenue growth to take a hit. But sales from January to September were $86 billion, an increase of nearly 25% from a year earlier, Huawei said. That implies, based on comparisons with previously released figures, that sales accelerated in the July-to-September quarter.

Huawei is the world’s leading producer of the equipment that powers cellphone networks. But U.S. officials have long been concerned that the Chinese government could use the company’s products to gather intelligence, an accusation that Huawei has repeatedly denied.

Washington’s warnings have so far failed to halt Huawei’s drive to remain a powerhouse supplier as telecom carriers around the world upgrade their networks to the next generation of wireless technology, or 5G. The company said Wednesday that it had signed more than 60 5G contracts worldwide, up from 50 a few months ago.

Huawei’s shares are not publicly traded, which means it has no legal obligation to announce its financials. The company began reporting quarterly results only this year, and the figures it provides are not audited. It can also be selective about which numbers it shares.

On Wednesday, for instance, the company did not offer a breakdown of its latest sales for different business divisions, which would have provided a better sense of how it has been dealing with the U.S. blacklisting.

The blacklist has not yet amounted to an airtight ban on U.S. technology sales to Huawei. For the past few months, the Trump administration has permitted sales to Huawei that are used to maintain existing mobile networks. And some of the company’s U.S. suppliers have determined that they can lawfully continue selling to Huawei certain nonsensitive products that are made outside the United States.

The administration is preparing to issue export licenses to some U.S. companies soon, which could help ease the strain on Huawei’s supply chain. In a conference call with analysts last month, the chief executive of the U.S. chipmaker Micron, Sanjay Mehrotra, said that if the company was unable to get licenses, its sales to Huawei could start to tumble.

Huawei may be feeling the absence of one U.S. partner more acutely. Because the company is barred from working with Google, the latest Huawei flagship smartphone, the Mate 30 series, has been released without Google’s Play Store and therefore without normal access to Google apps.

That makes no difference for Huawei’s many fans in China, where most Google services are blocked anyway. But it could seriously turn off phone buyers across Europe and the rest of the world, for whom a phone without the Google Maps, Gmail and YouTube apps may as well be a shiny brick.

Huawei says it has built its own smartphone operating system, Harmony, although it remains to be seen whether the company can persuade enough developers to build software and services for Harmony that could substitute for Google’s. Huawei said Wednesday that it shipped more than 185 million smartphones between January and September, an increase of 26% from the same period last year.

Huawei did not break out the latest quarter’s results on their own. But comparing the nine-month figures with the company’s previously disclosed six-month figures suggests that sales growth for the most recent quarter was 27% compared with 13% in the quarter before. Huawei also said its profit margin for the first nine months of the year was 8.7%, which is the same profit figure it gave for the first half of this year.

Tweets by @forbes_india
Hot stuff: Lawrence Kurzius spices up McCormick
How to take a do-it-yourself sabbatical